She says she is an “old-fashioned” Methodist, but the variegated forms of spirituality practiced during her previous eight years in the White House and beyond, would certainly give pause to the founders of Methodism, John and Charles Wesley.

Venerable Watergate reporter Bob Woodward of the Washington Post was the first to publicly reveal her sensational “conversations” with deceased first lady Eleanor Roosevelt, as described in his book, The Choice.

In late 1994, President Clinton and his wife, Hillary, invited a group of popular self-help authors to Camp David to help them find answers after the Democrats’ devastating loss to the Republicans in the 1994 congressional elections.

The names of three attendees leaked to the press, including Anthony Robbins, author of Awaken the Giant Within; Marianne Williamson, author of A Return to Love; and Stephen R. Covey, author of The Seven Habits of Highly Effective People.

The identities of two others were kept secret, but uncovered later by Woodward.

One was Jean Houston, co-director of the Foundation for Mind Research, which studies psychic experience and altered and expanded consciousness. “She was a believer in spirits, mythic and other connections to history and other worlds,” Woodward noted in his book.

Houston describes herself and her late husband, Robert Masters, as founders of the human potential movement. In the 1980s, Houston launched The Mystery School, where students embark on a year-long study of mythic stories which are meditated upon and enacted.

“Houston believed that her personal archetypal predecessor was Athena, the Greek goddess of wisdom. She conducted extensive dialogues with Athena on her computer that she called “docking with one’s angel. Houston wore an ancient Hellenistic coin of Athena set in a medallion around her neck all the time.”

The other participant at Camp David was Mary Catherine Bateson, Houston’s associate, an anthropology

professor at George Mason University and the daughter of anthropologist Margaret Mead. Bateson was the author of “Composing a Life,” which chronicles the journey of five women on a nontraditional life path that Hillary described as one of her favorite books.

Hillary and Houston hit it off immediately, especially during a discussion of how to use the office for the advancement of society, Woodward noted. “Houston said Hillary was carrying the burden of 5,000 years of history when women were subservient. The rising of women to equal partnership with men was the biggest event in history, Houston told her.”

Houston even compared Hillary to Joan of Arc, and conveyed to her that she had an opportunity to be a transformational figure.

“Houston told Hillary that she would prevail. Hillary was creating a new pattern of possibility for women. She had to hang in there, not give up. Her time would come when she would be in the place and the role that she could really express the fullness of what she was,” Woodward learned, which sounds prescient in light of Mrs. Clinton’s current aspirations for the presidency.

After the weekend at Camp David, Hillary invited Houston and Bateson to the White House. In Hillary’s office, Houston noticed a large photo of former first lady Eleanor Roosevelt.

Houston learned that Hillary was a huge fan of Eleanor. “As they talked further, Houston reached the conclusion that Eleanor was Hillary’s archetypal, spiritual partner, much as Athena was for Houston,” Woodward learned.

Unusual sessions in the solarium

On her visit to the White House in early April 1995, Houston proposed that Hillary dig deeper for her connections

to Mrs. Roosevelt. Houston and Bateson met with Hillary in the rooftop solarium, set atop the White House with windows on three sides.

It was afternoon and they all sat around a circular table with several members of the first lady’s staff. One was making a tape recording of the session. (One can only wonder if the tape still exists and if it formed the basis for the remarkable recounting of details by Woodward.)

“Houston asked Hillary to imagine she was having a conversation with Eleanor. In a strong and self-confident voice, Houston asked Hillary to shut her eyes in order to eliminate the room and her surroundings, and to focus her reflection by bringing in as many vivid internal sensory images as she could from her vast knowledge of Eleanor,” according to Woodward’s source.

Hillary sat back in her seat and closed her eyes. “You’re walking down a hall,” Houston said, “and there’s Mrs. Roosevelt. Now let’s describe her.”

Hillary proceeded to describe what she saw.

Houston instructed Mrs. Clinton to go to Eleanor and speak to her, according to Woodward’s book.

Hillary entered into a long discourse directed toward the former first lady. Houston asked the first lady to further open up herself to Mrs. Roosevelt, borrowing a technique “practiced by Machiavelli,” who used to talk to ancient men. “What might Eleanor say?”

Regarding the first lady’s controversial role in governing the country, Eleanor reportedly told Hillary, “You know, I thought that would have been solved by now. You’re going to have to just get out there and do it and don’t make any excuses about it.”

Next, Houston asked Hillary to carry on a conversation with Mahatma Gandhi, the foremost leader of the Indian independence movement in British-ruled India. Talk to him, Houston instructed.

“Hillary expressed reverence and respect for Gandhi’s life and works, almost drawing his and her own life together with her words, opening herself up wide…It was a strong personal outpouring — virtual therapy, and unusual in front of a large group.”

Refused to talk to Jesus

Houston then told her to communicate with Jesus, but Hillary refused, saying that would be “too personal.”

Woodward says this session with Houston– which some labeled a séance – lasted an hour. There were attempts to keep the sessions secret, because some thought there would be comparisons to Nancy Reagan’s use of astrology in the White House.

“Houston had at least one more deep, reflective meditation session, in which Hillary closed her eyes and carried on an imaginary discussion with Eleanor Roosevelt,” according to Woodward.

One Christian apologist and author, Eric Barger, of Stand Up Ministries, finds these sessions deeply troubling.

“Deuteronomy 18 forbids this kind of thing in the strongest possible terms used anywhere in the Bible.”

Another well-known psychic, Marianne Williamson, participated in some of the sessions, according to Barger.

“Williamson popularized what is really the bread and butter of the New Age movement today, the ‘Course in Miracles’ book. She spent the night in White House when the Clintons were there and went up to the rooftop solarium for the séances,” he says.

In 1994 Esquire magazine reported that Hillary Clinton was a devotee of Williamson, that Williamson was spending nights in the Lincoln bedroom, and the pair were staying up late exploring how to heal America. Oprah was largely responsible for boosting Williamson’s popularity and her book sales.

When the controversial sessions became public, Houston angrily denied they were séances, saying they were merely creative “brainstorming” sessions.

Paul Kengor, author of God and Hillary Clinton: a spiritual life, also denies they were séances, but says “they were definitely bizarre and far more out-of-line than anything First Lady Nancy Reagan did with her astrologer in the 1980s.”

“Mrs. Clinton did not deny the reports, and neither did her staff. Once the revelations became public, she tried to joke about them and move on, clearly embarrassed, especially politically,” Kengor observes.

Kengor says Hillary was involved in “clairaudient channeling,” which “involves relaxing oneself in either a fully conscious or mildly altered state of consciousness and then listening to one’s ‘inner-self.’”

Houston urged Hillary to write a book about children, and Hillary decided to pursue an idea that had already been germinating. She didn’t like her first draft, however, so she reached out to Houston for help. “In October and November 1995, Houston virtually moved into the White House residence for several days at a time to help,” Woodward recounted. With Houston’s assistance, It Takes a Village: And Other Lessons Children Teach Us was published in early 1996 and rose to the top of the New York Times bestseller list.

Another one of Hillary’s major spiritual influences during her time in the White House was Rev. J. Philip Wogaman, the pastor at Foundry United Methodist Church in Washington D.C., which the Clintons attended.

In 1995 the Daily News quoted Rev. Wogaman saying, “The Scriptures, like the Washington Post, contain both truth and error.”

He also said, “The government, not the church, is the answer for the poor,” and “Drug abuse, murder, unethical business practices, family breakup and homelessness” were created by “unrestrained laissez-faire capitalism.”

In 1986, Rev. Wogaman called for “revenue sharing on a world scale.” He also taught that God is both he and she and talked about one-world government and building a world religion.

“They put the homosexual couples in the front row of the church,” Barger notes. “That was pretty provocative over 20 years ago.”

A leftist rabbi made his mark

Lerner got degrees at Columbia and UC Berkeley, then went on to chair the Students for a Democratic Society (SDS) in Berkeley during the 1960s. Later he became a professor at the University of Washington, where he proclaimed, “I dig Marx.” 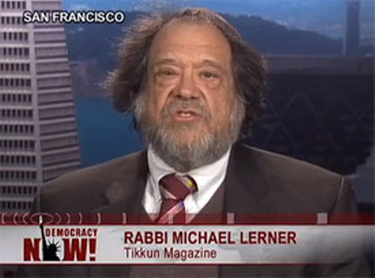 mandatory to find your way. He said, ‘Until you’ve dropped acid, you don’t know what socialism is,’” according to Barger.

Lerner was indicted for a violent assault against the U.S. Federal courthouse in Seattle on February 17, 1970 and spent eight months in jail.

In 1988 the Clintons discovered Lerner and his magazine, Tikkun, and Lerner quickly became a source for Hillary Clinton. He was a frequent guest in the White House and some even labeled him as another guru to the president and the first lady.

A phrase that made her famous, “the politics of meaning,” came from Lerner, from his book called “The Politics of Meaning.”

“So she has Jean Houston and Marianne Williamson and Maya Angelou pushing New Age spirituality and Lerner pushing Marxism to her at the same time and mixing these things together,” Barger observes.

Barger says that Lerner and the Clintons had a falling out, because Lerner concluded they were in politics ultimately for their own financial gain and self-aggrandizement.

Paul Kengor concluded that Hillary “appears to be a Christian and is truly a lifelong committed Methodist, albeit a very liberal Christian, a Religious Left Christian.”

Kengor has been troubled by her and her denomination’s views on the abortion issue. “Her denomination, the United Methodist Church, supports legal abortion and in fact is a member of the Religious Coalition for Reproductive Choice. So, she points to her denomination for guidance on this matter and, lo and behold, gets backing in being “pro-choice.”

“The minister at her Washington, DC church, one of the top Methodist leaders in the nation, is pro-choice. Why wouldn’t he be?

“The UMC leadership is pro-choice, as was, by the way, a fellow Methodist named Harry Blackmun, author of Roe v. Wade, who, incidentally, was invited to take the pulpit at Hillary’s church one day in 1995.”

“She is also a Christian who in my view is tragically wrong and misguided on abortion. That said, if you’re a conservative evangelical and someone who is a deeply pro-life Christian, you are almost certainly going to be repulsed by her stridency on abortion. She is to the left of everyone on the abortion issue.”