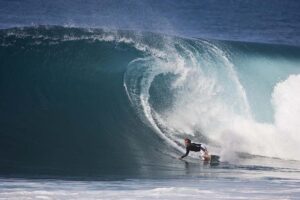 He patiently watches the wave come closer and closer, then turns his board, paddles into the wave, cutting alternately graceful elliptical lines and quick power turns that send a wall of water spraying.

This is Tom Curren, surfing legend and decisive Christian.

“The ocean is a sign of God’s power,” he told 40,000 people at a Christian rally in Anaheim Stadium. “It’s really good to live for Jesus Christ.”

But the three-time world champion wasn’t always stoked for Jesus.

In the sixth grade he was already drinking cocktails, and in the seventh grade, getting high on drugs, according to the online Encyclopedia of Surfing. His surfer dad left his born-again mom when he was 17.

At the height of his career, Tom fell out of all competitions because of alcoholism. Photos in surfing magazines contrasted the winners with Tom boozed up and lying inert on a beach in Mexico.

“He became the laughing stock of the surfing tour,” said Pastor Jimmy Papik, a surfer from Venice, California. 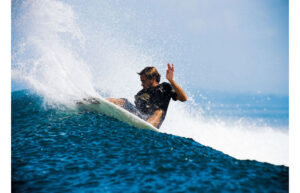 But he was not to be counted out. Tom got straight with Jesus and returned to competitions to cement his legacy.

“To be honest there were a few years there where I really wasn’t doing much of anything. I was pretty lost I guess,” he confides to Surfer Magazine. “For me, it’s just Jesus is there and He’s free, and He’s all I need. It’s something where I know I’m not the only one to struggle with alcohol. I’m doing really well at the moment.”

Tom, now 52, began surfing when he was two years old in Santa Barbara, where he perfected his records-smashing technique on the long ride of idyllic waves at Rincon.
His father, Pat Curren, pioneered big-wave surfing in Hawaii. He made boards and wetsuits for his son. He loved skateboarding, but after age 13 the waves drew him away from the wheels.

In 1978 he won the Boys’ U14s Western Surfing Association title, and the following year he became the Boy’s National Champion. He was gifted, it would seem, by God to follow in Jesus’ footsteps and walk on water.

In 1980, he snatched the World Amateur Junior Championship, and in 1982, he pocketed the Men’s title.

Then he went pro.

At the time, three Australians were dominating everything – Mark Occhilupo, Gary Elkerton and Tom Carroll. And South African Martin Potter was dazzling the world with the sport’s first aerials.

But in his first professional competition, Tom Curren won – the 1982 Marui World Surfing Pro in Japan. What the ballet dancer does on the stage, Tom did with mesmerizing, pulsating brilliance on water. His inexorable victory sweep culled consecutive world titles in 1985 and 1986.

His reputation was etched with the other surfing legends, Duke Kahanamoku and Kelly Slater — according to some sources.

“He has a surfing style that combines smooth, rhythmic, seamlessly-linked maneuvers with blinding speed, raw power, and unique check turns and body English,” says his entry in Wikipedia.

Then just as suddenly he exploded on the surfing scene, he slipped out of view. The surfing lifestyle often goes hand in hand with the party lifestyle, and the drinking and drug habits he started as a teen were beginning to sink him.

It was his devout Christian mother, Jeanine, who rescued her prodigal son. A surfer herself, she took him to ride boards. She preached at him, loved on him and prayed for him. Everyone had basically written off the phenom who got stung by addiction, but Tom was slowly grinding out a recovery.

“The pastor at the drug and alcohol service says, ‘This isn’t the twelve step program; it’s a one step program.’ Just dying to yourself, and cutting off the flesh and basically putting Christ first,” Tom says. “His teachings are hard, they get you right where it hurts. Now, as hardcore and clear cut as that sounds, people will either dig that or they don’t.”

With his relationship restored with Jesus, Tom Curren stormed back into the spotlight in 1990. He won an unheard-of seven events to achieve his third world title.
And in 1992, he turned his attentions to his father’s love for big wave riding in Hawaii. He won the Wyland Galleries Pro. 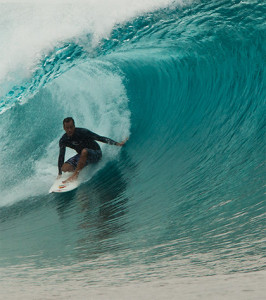 “When you surf big waves you learn to trust in God. It’s a situation where you’re fearful, where you’re aware that life is short, but where you’re reminded that only God knows how long you’ve got,” Tom says. “You experience fear and faith at the same time.”

Today, Tom is coaching surfers and lives off a Rip Curl sponsorship to the tune of $2 million. It’s a beautiful life, visiting heavenly spots, riding heavenly waves. He enjoys this Earth and dreams of the waves he’ll ride in Heaven.

“God has lifted up and broken down strongholds and put that light on things the way only He can,” Tom says.

Anthony Gutierrez is a student at the Lighthouse Christian Academy in Santa Monica, California