As a journalist writing for Cosmopolitan in the 1970s, she witnessed the unholy alliance that developed between the feminist movement and purveyors of the sexual revolution. Her unique vantage point in that movement and skills as an investigative journalist allowed her to put together for the first time shocking details about the way the infamous Roe v. Wade decision was crafted. 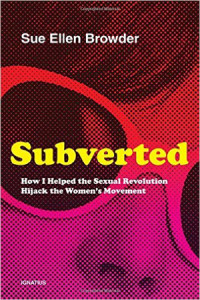 Chief Justice Warren Burger assigned the task of writing the opinion to Blackmun, even though Blackmun’s craftsmanship “lacked finesse” and he was “by far the slowest writer on the Court.”

In May, 1972 Blackmun showed an initial draft of his Roe opinion to one of his law clerks, and the clerk was “astonished” the draft was so crudely written and poorly organized. When Blackmun circulated the draft to the other justices, his more liberal colleagues were disappointed and Justice Byron White strongly dissented, Browder discovered in her research.

While Blackmun’s writing lacked flair, his young clerk, Frampton, was an excellent writer. He had been managing editor of the Harvard Law Review prior to his graduation in 1969. Frampton volunteered to stay in Washington during the summer of 1972 to help Blackmun research and draft opinions. The two talked by phone almost every day, Browder discovered.

Frampton had stumbled upon a highly persuasive book, Abortion, written by Larry Lader. It was a “masterpiece of propaganda,” according to Browder. Lader’s “story was laced with poisonous half truth, limited truth, and truth out of context.”

“When Blackmun accepted Larry Lader, a mere magazine writer, as a reliable authority on history, philosophy, and theology, he became a blind man following a blind guide,” Browder notes in her book.

teachings about abortion – and Blackmun and his clerk fell for the ruse.”

Lader’s Abortion book was cited at least seven times in the final Roe decision. The other major influence on the historical underpinnings of the decision were papers written by Cyril Chesnut Means Jr., a National Abortion Rights Action League (NARAL) attorney who falsified abortion legal history.

Much of the bogus abortion history in Lader’s acerbic book was invented by Means. Villanova University law-history professor Joseph Dellapenna analyzed the historic errors in Roe v. Wade in a 1,283 page tome, Dispelling the Myths of Abortion History:

“Means propounded two hitherto unsuspected historical ‘facts’: First, that abortion was not criminal in England or America before the nineteenth century; and second, that abortion was criminalized during the nineteenth century solely to protect the life or health of mothers, and not to protect the lives or health of unborn children. Regardless of how many times these claims are repeated, however, they are not facts; they are myths,” Dellapenna noted.

Means’ papers were cited seven times in the Roe decision. Dellapenna’s discovery of the distorted history that undergirded Roe was not motivated by a conservative Christian viewpoint. Dellapenna describes himself as a “lapsed Unitarian,” one who found Unitarianism “too restrictive.”

Many statistics in Lader’s book and later in NARAL’s press releases were completely made up. “Knowing that if a true poll were taken we would be soundly defeated, we simply fabricated the results of fictional polls,” in one instance saying that 60% of Americans favored abortion, Dr. Bernard Nathanson revealed. Nathanson was a co-founder of NARAL and performed 60,000 abortions until the invention of the ultrasound turned him against the procedure.

Lader and Nathanson also fabricated the number of illegal abortions done annually in the U.S. Although the actual figure was about 100,000, Nathanson said, “The figure we gave to the media repeatedly (and the figure in Lader’s book) was one million.”

They also lied about the number of women dying each year from illegal abortions. While the real number was about 200, the number they fed to the media was 10,000. The false narrative was spread by a willing news media and never questioned.

When Blackmun’s young clerk Frampton completed his draft of the Roe decision — relying heavily on Lader and Means’ falsified history — he suggested that Blackmun circulate the new draft without any cite-checking, the kind of detailed fact-checking that ensures a judicial decision is sound. He was eager to circulate his draft before oral

Frampton gave three reasons to Blackmun for rushing the process: First, it would “nail down (Blackmun’s) keeping the assignment,” “should influence questions and thinking at oral argument,” and “might well influence voting,” Browder discovered in her research.

Pulitzer Prize-winning, pro-abortion historian David J. Garrow, also studied Blackmun’s papers and reached a similar troubling conclusion about the process, stating that Blackmun had “ceded far too much of his judicial authority to his clerks” and that his clerks made “historically significant and perhaps decisive contributions to Roe and Doe” – a degree of involvement Garrow called “indefensible.”

“In any case,” Browder writes, “Harry was deceived by Lader’s propaganda, six other black-robed men on the bench went along with the ruse, and the tragic result was the U.S. Supreme Court’s most controversial decision since the Dred Scott v. Sandford decision denied personhood to black Americans in 1857.”

Shortly after the decision, influential Harvard law professor Laurence Tribe wrote in the Harvard Law Review: “One of the most curious things about Roe is that, behind its own verbal smokescreen, the substantive judgment on which it rests is nowhere to be found.”

A year later, Blackmun himself seemed troubled by his own decision, telling The Washington Post it would be regarded as “one of the worst mistakes in the court’s history or one of its great decisions, a turning point.”