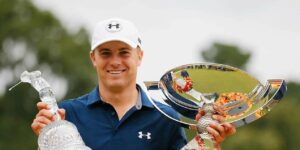 According to Esquire magazine, Jordan Spieth is the new “savior” of golf, but he probably would shy away from such journalistic hyperbole: He knows there’s only one Savior.

The wunderkind earned golf’s #1 ranking with a win at the 2015 FedEx Cup. Two years later, he won his third major at the 2017 Open Championship, by three shots at 12 under-par. A quiet Christian, he attends the PGA Tour’s Christian group with flamboyant buddy Bubba Watson.

“He goes to Bible study with us on the Tour here,” says Watson, who in April 2015 put the traditional snazzy green jacket on Spieth to symbolize his elite status with other Masters winners at Augusta.

On Sept. 27, 2015, Spieth sank putts from anywhere and everywhere on the green to win the $10 million Tour Championship, showing why golf legend Ben Crenshaw nicknamed him Wyatt Earp. On the 11th hole, the Texan dropped a 45-foot putt, a “dagger” that sank his closest competitor’s hopes of regaining the lead. 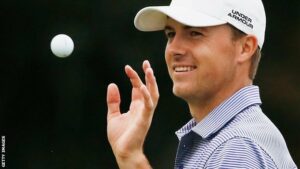 His five wins this year include two majors and winnings totaling $23 million – not bad for a 22-year-old. Spieth’s youth and dominance are strikingly similar to golf’s last and now-fallen Titan, Tiger Woods.

While other champs flaunt pictures with hot girlfriends, Spieth likes to pose with his autistic sister, 15-year-old Ellie.

“She’s my inspiration,” Spieth told the UK’s Telegraph. “She’s the funniest member of our family. I really love spending time with her. It is humbling to see her and her friends and the struggles they go through each day, which we take for granted. They are the happiest people in the world ”

When other Masters’ winners celebrate amid opulence and ostentation at one of Augusta’s many 5-star hotels, Spieth celebrated at Chick-fil-A restaurant. He still drives the same Yukon truck from his youth.

After enduring Woods’ excesses, PGA can relax and enjoy a new group of phenoms who live clean and uphold the traditional American hero image. Bubba Watson shares Jesus every chance he gets and Zach Johnson is overtly evangelistic. With the addition of Spieth, they form something of a Christian triumvirate at the pinnacle of the sport.

“Jordan is just very genuine,” said Steve Koch, athletic director at Jesuit College Preparatory School in Dallas, from which Spieth graduated in 2011. “He says what he believes. He believes in supporting others, taking care of others before he takes care of himself.” 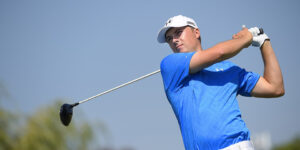 Michael Earsing, president of the Jesuit school, also told the Catholic Herald: “We talk about how much he loves his sister. She’s someone he loves and who has kept him grounded.”

Spieth is somewhat reticent about his faith. One secular journalist described not having to endure one mention of God in a half-hour Spieth speech as “an act of mercy.” Spieth talks with his actions. He goes to Bible study. He loves his family. He lives humbly. He praises his sister.

Ever since his wife divorced him over revelations of his affairs, Tiger Woods lost his dominance of the sport. Enthusiasts have looked for a new Jack Nicklaus to wow them. With some heady numbers at a boyish age, Spieth appeared to Esquire to merit coronation. They called him “Savior.”

Some adore him, but Spieth knows Who really is worthy of adoration — his Lord and Savior Jesus Christ.