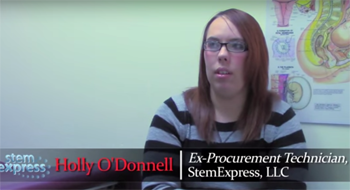 In today’s video installment from the Center for Medical Progress, Holly O’Donnell struggles to tamp down her emotions as she recalls her worst experience at Planned Parenthood while working as a procurement technician for StemExpress.

O’Donnell recounts a day at the Planned Parenthood abortion clinic in San Jose, California, that will forever haunt her memories.

O’Donnell was training with another StemExpress employee identified only as “Jessica” when a baby boy was delivered intact. The baby had been selected for organ harvesting.

So then I hear her call my name. ‘Hey, Holly! Come over here. I want you to see something kinda cool. It’s kinda neat!’ So I’m over here and – the moment I see it I’m just flabbergasted. . .

And she’s like, “Okay, I want to show you something.” So she has one of her instruments and she just taps the heart and it starts beating. And I’m sitting here, and I’m looking at this fetus, and its heart is beating and I don’t know what to think. . .

It had a face. It wasn’t completely torn up. And its nose was very pronounced. It had eyelids and its mouth was pronounced. And then, since the fetus was so intact, [Jessica] said, “Okay, this is a really good fetus and it looks like we can procure a lot from it. We’re going to procure a brain.”

“It’s hard to imagine how anyone could even give such an order and what kind of callous and depraved subculture must exist at Planned Parenthood that this kind of horrific atrocity could be remotely considered ‘cool’ or ‘neat,'” said Troy Newman, President of Operation Rescue and Board member for the Center for Medical Policy. “Kermit Gosnell is serving life in prison for cutting the backs of babies’ necks with scissors. Now, at Planned Parenthood, live babies are murdered using scissors to harvest brains for ‘research’ – as if the ‘research’ part makes it all okay. Well, it doesn’t. Jessica and the rest of the abortion crew at Planned Parenthood should be in a prison cell right next to Gosnell!”

The CMP video shows incriminating clips of Planned Parenthood and procurement company officials telling of intact, sometimes live births and the illegal altering of abortion procedures for the purpose of organ harvesting.

Meanwhile, Holly O’Donnell left us with one final thought.

“It’s just really hard knowing that you’re the only person who’s ever going to hold that baby. . . I think that it’s a wasted life, and it’s sad that so many people view it as a mistake,” O’Donnell said. “You know, ‘cuz it’s not. I mean, life isn’t a mistake. Getting pregnant – it can be an accident, but it’s not a mistake.”

Operation Rescue is one of the leading pro-life Christian activist organizations in the nation and has become a strong voice for the pro-life movement in America. Click here to support Operation Rescue.