By International Christian Concern
Christians in India continue to face the brunt of Hindu extremism. A fresh outburst of violence against Christians was unleashed when a group of worshipers was brutally attacked at a church service in India’s Kerala state.
Kerala, one of India’s southern states, boasts the densest populations of Christians in India who represent over 40% the state’s population. This fact led many Christians in Kerala to believe they were insulated from the growing religious intolerance India has witnessed over the past year.
“I was literally terrified,” said Pastor Shiju, the senior pastor of Reaching the World with Love Ministries Church. “I did not know what was going on as a mob of 30 people advanced towards me while I was preaching the message. They hit me in the face and then kicked me all over the body. They first targeted me and then the congregation. I had to flee and ran away from the church as I could make out that I was their prime target.“

Over 400 Christians, the majority of whom are converts to Christianity, gather at a community hall in Attingal, Kerala every Sunday for worship for Reaching the World with Love Ministries. Around 12:30 pm more than 200 people from radical Hindu organizations came to the community hall shouting loud slogans including, ‘Bharat Mathaki Jai‘ (Hail mother India).

Radicals then forced themselves into the hall and started beating the pastor, causing severe internal injuries. Later, the assailants turned on the congregation. 40-year-old Girija narrowly escaped with a broken finger when she dodged a blow that would have smashed in her head when a radical attempted to beat her with a motorbike helmet.

The radicals went onto desecrate the communion elements and broke the wooden table that was used to display them during worship services. The radicals also damaged the pulpit, microphones, and cables used by the worshipers to conduct their services. The Christian worshipers fled in different directions but were further assaulted outside of the community hall many of the 200 radicals were waiting for them.

Upon witnessing the attack, Mr. Deepu, one of the Christian worshipers, immediately ran to the police station and reported the ongoing assault. Even though the police station was only yards away, police took 30 minutes to arrive on the scene. 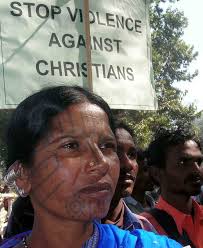 Quickly, news of the attack spread and the state home minister visited the pastor and the community where the attack took place. The minister in charge of the state’s law and order promised that the attackers would be booked and brought to justice.

The next day, Christians in Attingal organized a peaceful protest march in the town. More than 500 people participated in a march to protest the attack on the Reaching the World with Love Ministries Church. Local MLA (Member of Legislative Assembly) and other community leaders also took part in the protest, condemning the acts of the radical Hindu groups.

At the same time, the ‘Hindu Ikya Vedi,’ (Hindu United Front) a local Hindu radical group, led a counter protest against the Christians brandishing placards carrying anti-Christian slogans. The anti-Christian protestors threatened the Christians of Reaching the World with Love Ministries Church with dire consequences if they met again, particularly on that following Sunday. They said they would wipe out Christians in Attingal and burn Pastor Shiju alive if they continue to hold prayers in Attingal.

As Christians in Attingal continue to recover from this latest incident of persecution, Christians across India remain vulnerable. No matter where they are in India, the real potential of physical violence being metered out by the Hindu hard-line groups seems inevitable. Unless the BJP-led government of India starts confronting the issue of Christian persecution, religiously motivated violence, like that endured by the Christians of Reaching the World with Love Ministries, will continue to spread and multiply. –International Christian Concern            www.persecution.org