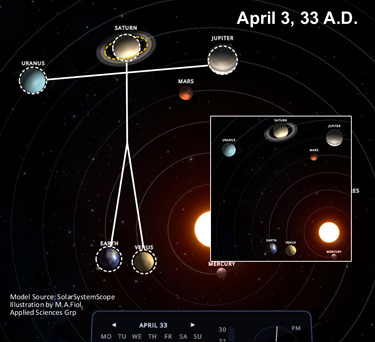 Did an amateur astronomer and self-described “historical detective” stumble upon a remarkable planetary alignment that corresponds with the date of Jesus’ death on the cross?

“I came across a very unique geometric pattern,” says Miguel Antonio Fiol, an entrepreneur and part-time researcher. “The pattern was a representation of the crucifixion – it pointed me to Jesus of Nazareth,” he says.

With Saturn as the “head” of Jesus complete with a halo or crown of thorns formed by Saturn’s famous rings, Jupiter and Uranus formed the outstretched arms of Jesus, and Earth and Venus represented His feet. Fiol was astonished when he connected the dots and this striking image emerged.

This unusual planetary alignment appeared in mid-March through mid-April of 33 A.D., and has only appeared six times between the year zero and 2000 A.D.

In his research, Fiol used an Orrery model to study the relationships of the planets on April 3, 33 AD, the date a number of scholars have favored for the climactic moment in world history.

In 1910, J. K. Fotheringham was one of the first to propose April 3, 33 AD on the basis of its coincidence with a lunar eclipse. In the 1990s Bradley E. Schaefer and J. P. Pratt, following a similar method, arrived at the same date. Astronomer Colin Humphreys, using a different method, confirmed the crucifixion date as April 1st or 3rd, 33.

“More than a few studies have pinpointed that date based on the Bible, calendars, astronomical conditions, even geology,” Fiol notes.

Fiol, a University of Wisconsin-Madison history major, was researching a manuscript when he discovered the odd planetary formation using multiple heliocentric Orrery models to study the date of Jesus’ death via a top-down view of the solar system.

“Even at first glance I knew it looked like the crucifixion,” he adds. “But it took time to uncover all the incredible parallels.”

Fiol was also struck by the fact that the unusual alignment appeared previously in the year 4 B.C., regarded by some scholars as the year of Jesus’ birth.

When he drew a direct line from Jupiter through Mars to the centerline, he found an accurate point for the “waistline” of Jesus.

“Uranus and Venus are the only two planets in our solar system that spin clockwise,” Fiol says. “They happen to match up with two other planets that spin the opposite direction.”

“There is something notable about its simplicity,” he says. “You can see it as a figure (Jesus) or as a cross-shape.”

Fiol knows there will be doubters. “I dont think people yet grasp how rare it is for Jupiter, Saturn and Uranus to line up – Jupiter travels far faster than Uranus so the result is a very small window when all three pass each other simultaneously.

“I hope people can see all the amazing parallels involved. I feel it is far more grand, and perhaps more important, than most are giving it. There is a bigger picture here, beyond the…picture.”