In recent years, Egyptian Christians and Muslims alike have suffered at the hands of Islamic extremists.

But, according to Gary Lane, Senior International Reporter for CBN News,  the light of Christ shines in the lowliest of places. One Egyptian woman picked up her cross and left an affluent life to bring hope to impoverished children surrounded by garbage.

“For the many Christians living in Cairo’s garbage slums, the only life they know is garbage picking, sorting through tons of trash each day for recyclables,” said Lane in a report for CBN.

“Many of them had a lot of discrimination and persecution in the rural areas,” author Marty Makary explained. “And when they moved, migrated into the city, there was no place really to live except in the trash for many of them that were poor, mostly driven by the bad economy but in part by the discrimination for jobs.”

“They decided to sift through the trash. It’s the most efficient recycling operation in the world,” he added.

And those who visit these Cairo neighborhoods will see garbage everywhere–in the streets, and even piled inside the homes of the Zabaleen, the garbage people.

“Many children here do not attend school. They spend their days picking through the garbage to help their families earn a few dollars per day,” said Lane. “It’s a hopeless existence, but one Christian’s goal is to give them love today and a future tomorrow.

“Mama Maggie, as she is known, hopes to give them a chance at life outside the slums.”

Makary is the co-author (with Ellen Santilli Vaughn) of a new book about Mama Maggie’s work called, “Mama Maggie: The Untold Story of One Woman’s Mission to Love the Forgotten Children of Egypt’s Garbage Slums.”

Makary traveled to Cairo to learn more about the ministry of Mama Maggie Gobran.

“Unlike Mother Teresa, who came from poverty and took a vow of poverty, Mama Maggie came from wealth. And during an encounter when she was a successful marketing executive, connected with a child in the garbage slums–a famous district of Cairo that has been mostly neglected,” he said. 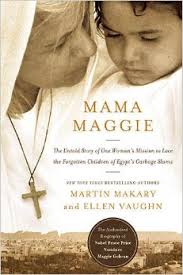 She found joy and happiness there and returned over time. She eventually gave up her marketing career and started a ministry called Stephen’s Children.

“Many times when the kids are asked what do you want to do when you grow up, they’ve really never thought that far in advance. And some of the kids, can you believe, have never been called by their name by anyone,” Makary said. “But no one has ever valued them and asked them that question.”

Lane continued by saying that one girl said she only dreamed of having a piece of tomato to eat. Another child said his dream came true at a Stephen’s Children camp where he actually slept in a bed.

But dreaming big means learning a skill. Mama Maggie’s ministry (http://www.stephenschildren.org/)   teaches the children a trade like shoe and clothing manufacturing–marketable skills for earning money and serving others, whether in the garbage slums, or elsewhere. 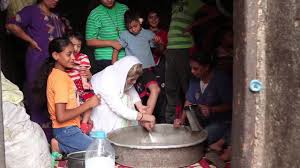 Seven of the 21 Egyptian Christians killed by ISIS in Libya last February were helped by Mama Maggie’s ministry.

“They were kids that she fed and taught and were part of the group. Two of them had become leaders in the ministry and they are now using that story to teach forgiveness in the Middle East. They’re teaching the kids to break the cycle of revenge,” Makary explained.

So, what impresses Makary the most about Mama Maggie? He said it’s her humility.

“It is amazing to see that sort of genuine selflessness in a world where you so rarely see it,” he told CBN News. “You know, when I came back, the thought of being upset at the cab driver, or frustrated with the bank ATM, or something like that, it just put everything in life in perspective.” – A perspective of serving and helping, bringing hope and dignity to the most neglected places.

Please pray for the Christians in Egypt, Mama Maggie, her ministry, and the Egyptian govenment. -ASSIST News