When she speaks in front of high school audiences and tells students she was 37 and a virgin when she married, eyes widen and jaws drop in a mix of shock and disbelief.

“It was one of the hardest things I’ve ever done – but it is possible!” exclaims Diane Hunter. She and her husband Roger are co-founders of Epic Life Ministries, and authored together “Purity by Design: the true benefits of sexual purity.”

In maintaining her vow of purity, she had to battle cultural influences. “It’s stunning to stop and consider how sexualized our culture has become,” Diane notes in the book. “There is a sexual undertone to nearly all commercials, advertisements, and the story line of movies. The climate of television has become one of flippant and degrading sexual humor, especially in sitcoms.”

In high school, Diane was a cheerleader. “Most Friday nights after the football game I walked home by myself while others on the squad went out to parties. I knew that if I was going to uphold my commitment to God and purity, I didn’t have the liberty to do the things that I saw drag other people down.”

Diane has never met a “partier” who maintained their sexual purity. 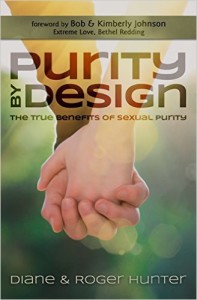 After she graduated from a Christian college, she taught elementary school for a few years before she joined Youth With A Mission. Then she enrolled in a graduate program to earn a degree in marriage and family ministries. “I knew I’d meet my husband there; the odds were high. There were five men for every woman enrolled at the seminary.”

But she didn’t. “People were marrying all around me. Why couldn’t I find my man?” she wondered.

Turning 30 was a difficult milestone. “I was a bridesmaid seven times before I got married. Do you know how many bridal showers I attended, dreaming of my own wedding day?”

Sadness threatened to engulf her at times. “Sometimes I really struggled. Sometimes I ate too much. Sometimes I watched too much TV. Sometimes I cried myself to sleep. Sometimes I dreaded going to church alone…sometimes it hurt just to be single,” she notes.

But waiting had its own rewards, which is very apparent today in the sterling character qualities evident in Diane. “Know that if you are waiting – for anything – God will use the waiting to speak powerfully to bring hope and freedom into other people’s lives…on the other side it is well worth it. Turn your longing and frustration into gleaning wisdom and revelation; God will not waste this time.”

Unwittingly, she stumbled upon the “secret” to staying pure in the midst of powerful sexual desires – God’s love. “I learned to genuinely receive His love. I let God’s love envelop me. My desire for love and acceptance (and sex) was strong, so I poured my heart primarily into knowing God as my Love.”

Then it finally happened. She met Roger at a small-group church party in someone’s home.

Roger had been sexually abused by a babysitter as a child, discovered pornography at 8-years-old, and lost his virginity as a young teenager. “Although I was raised in the church, I followed what I saw in the world and, trying to numb my own pain, I slipped into a destructive lifestyle of drinking, drugs, and casual sexual relationships” he notes.

Because Diane had prayed for years that her spouse would share her sexual purity, Roger’s past became a significant issue for them to overcome. During their 10-month engagement, Diane worked through a process of forgiveness with the Lord that began with forgiving the man who abused Roger as a child.

After their marriage in 2005, they moved to Redding California, where they got involved in Bethel Church. Their life experiences compelled them to write “Purity by Design,” which contains a vital message for young or old: sexual purity releases hope and healing in people who have been wounded in their quest to find love.

There are immeasurable blessings – spiritually, emotionally, relationally, and physically — that flow into the lives of people who follow God’s way.