The Contras slipped in during the wee hours of the morning and slit the throats of sleeping Sandinistas, sometimes 30, sometimes 50, sometimes the whole battalion of 350 before they disappeared undetected into the forbidding jungle.

Not so with Alex Delgado’s battalion. His lieutenant had received training from the strictest military specialists in communist bloc East Germany, and Tito Castillo never let a guard fall asleep.

Alex didn’t join the Sandinistas, the former Marxist government of Nicaragua that the Contras sought to topple, because of ideology. As a matter of fact, Alex really had no idea about the meaning of communism and capitalism.

He was just an 18-year-old, the seventh child in his family, ignored among the many mouths to feed. With no one pushing him to study, with no future in sight, Alex got swept up in the euphoria at the beginnings of the Sandinista government with hopes of eradicating the corruption of the former regime.

But the decision to join what seemed like a winning cause turned into two years of sheer misery. He trudged 10 hours a day, in danger of ambush, in danger of trip wires, gathering energy from inadequate food (they once made soup with roots and tree limbs).

His commander voiced vivid dreams of finding the enemy and decimating them in combat. Inside, Alex prayed to a God he didn’t yet know to never find the enemy – and God granted his wish. The only deaths in his battalion were from an ambush on a supply pickup and a friend while fording a river.

Body bags from other battalions flooded homes; sometimes they were left on the doorstep to be found by parents after soldiers rang the doorbell and fled at midnight.

It was an unwinnable proxy war that killed tens of thousands of youth in the ’80s, almost none of whom really understood the values of the superpowers of the United States and the Soviet Union who financed opposing sides.

“Many never got out of the army,” Alex said.  “A friend whose time of service was coming to an end deserted. The enemy found him and killed him.”

Once out of the Sandinista army, Alex practiced baseball. He threw a treacherous curve ball that won the championship of Leon twice and competed against other departments. Two years passed.

Then a friend offered to take him illegally to the United States. The first stop was Guatemala. But he never completed the second leg of the journey. Instead, he worked for a Palestinian shopkeeper selling electrical appliances on a busy retail street.

Playing baseball in Guatemala, Alex met the love of his life, Mercedes, who became his wife. With the strong background of Nicaraguan baseball, Alex played on five of the best teams in Guatemala and a future on a professional team seemed likely.

But God threw him a curve ball he didn’t expect. Alex and Mercedes were hanging out on Guatemala City’s Central Plaza in 1996 when they heard a man preaching in the middle of a circle of 100 or so people. Alex was intrigued by the message that Jesus could change his life.

The power of the Word and the work of the Spirit of God in his heart struck a deep chord. When invited, Alex accepted Jesus as his Lord and Savior and was born again. He immediately went to find an evening church service.

“In that moment, we wanted to get to know the church,” Alex says. “God had touched our hearts.”

Alex gave up his baseball career and began voraciously consuming the Bible.

“I found a lot of things that I had already lived as a young man without knowing that they were in the Bible,” says Alex, now 46. “I first read Proverbs. It was unexplainable, but God was speaking to my life. It led me to cry. I spent the whole day reading Proverbs and the terrace alone.” 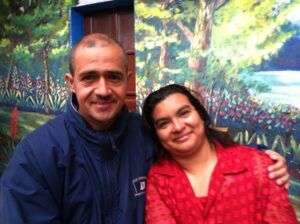 In two years time, he was ordained pastor as part of Christian Fellowship Ministries, a church-planting group that uses a multiplication strategy employing intensive evangelism and discipleship.

His first church was in Jocotales, a neighborhood in Guatemala City almost completely taken over by gang-bangers. The church rose, sputtered and ultimately closed after 10 years. One of his disciples is a pastor today.

At the same time, he became an assistant administrator in the Liceo Bilingue la Puerta, a low-tuition Christian school that reaches souls for God.

“I see in the kids a lot of the experiences I faced in my childhood when I didn’t have anyone who could give me an orientation about what to do,” Alex says. “I suffered a lot of loneliness, the separation of my parents. I was cast aside by my friends because I didn’t have the same talents of others.”

Today, he’s a humble legend among the Guatemalans who have passed through the church and school. He does much of the grunt work and gets much of the admiration of children and parents.

“You’re in the plan of God, and in that there is no failure. He does things in the best way,” says Alex, who is also assistant pastor of the Door Christian Church in Zone 1 of the capital city.

His only sadness, which his wife felt even stronger, was that doctors gave her 1% possibility of becoming pregnant due to hormone imbalances they couldn’t treat because of their finances. Mercedes cried out to the Lord in prayer and persevered for five years. One day, a school parent prophesied to her that she was already pregnant.

“Because of the desire I had to have a child, that impressed me,” says Mercedes, 36. “I believed him.”

And the Lord answered their prayers! Alex and Mercedes now have two kids: Eliseo, 13, and Andres, 9.

Alex has been redeployed from the carnage he faced in the Contra War to the intense spiritual warfare faced by all believers.

“There was so much pain, so much suffering in the army,” he says. “You live so much uncertainty because you don’t know if you’re going to live out of it. Living all that gave me a lot of sensitivity to suffering and conviction – conviction that there is nothing for sure in life except God.”