America’s greatest president, Abraham Lincoln, has variously been described as a religious skeptic, deist, or even a fatalist. But as Lincoln wrestled with God and his own “melancholy” during times of intense warfare and suffering at the end of his life, one scholar believes strong evidence for faith emerged.

“He had a remarkable faith journey that the traditional historian doesn’t want to see,” says Dr. Ronald C. White, Jr. author of the New York Times bestseller, A. Lincoln: a biography. White is a fellow at the Huntington Library, visiting professor of history at UCLA, and a senior fellow of The Trinity Forum.

Born on the frontier during the Second Great Awakening, Lincoln’s parents faithfully took him to a Baptist Church. ““From an early age, Lincoln rebelled against something that was too emotional. By the time he was nine, Lincoln could literally say the pastor’s sermon back word for word with all the gesticulations,” White says.

Lincoln’s father was not amused by these recitations – usually delivered atop a stump by the young lad in a less-than-respectful tone. The irreverent performances resulted in Lincoln being pulled down from his makeshift pulpit with some upbraiding by dad.

“By the time he was a young man he became a fatalist, which I would call a kissing cousin of deism,” White notes.

As an emerging lawyer with political aspirations, Lincoln penned a critique of revealed religion, Christianity, and the Bible, and showed it to an acquaintance. “One of his older friends, knowing Lincoln was going to be running for office, ripped it out of his hands and threw it in the fire,” White recounts. “This was not a smart thing to do, to attack orthodox Christianity in the 1830s.”

In 1840, Lincoln became engaged to Mary Todd, but he got cold feet and cancelled their planned wedding. The couple later reconciled and in the days immediately prior to the nuptials Lincoln felt apprehensive once more. Someone asked him where he was going, and he replied, “To hell, I suppose.”

In 1850 Abraham and Mary lost their second child, Eddie, probably due to tuberculosis. Lincoln sought

counseling from his Episcopalian minister, but the man was out of town. Instead, he turned to a young Presbyterian minister, James Smith, who had recently arrived in Springfield, Illinois.

“They were impressed with him and his pastoral concern,” White says. “Mary joined the church and Lincoln paid the pew rent for her.”

In 1853, the same church became embroiled in a dispute with the Presbytery and needed three lawyers to defend itself. “Lincoln was one of the three lawyers and I’m totally convinced the Presbytery wouldn’t have accepted him if it wasn’t recognized he was part of the church.”

“Church membership was more important in the 19th Century,” White notes. “You had to give a narrative of your faith.”

During the Civil War, the Lincoln’s lost their 12-year-old son, Willie, who succumbed to a high fever. “It was a devastating experience and Mary never recovered from it,” White says. Lincoln battled his own tendencies toward depression and struggled to understand God’s place in the depths of the war.

During the conflict, Lincoln and his wife attended the New York Avenue Presbyterian Church, led by Phineas Densmore Gurley. Gurley finished first in his class at Princeton Seminary and became chaplain of the U.S. Senate in 1859. He was a frequent guest at the White House and became a spiritual advisor to the president.

White believes that Lincoln began to re-engage with God through Gurley’s influence. “Here he finds a thoughtful faith that begins to resonate with him,” White observes.

“I argue that Lincoln, in the crucible of the Civil War and the tragedies that afflict him, is changed.”

White finds overwhelming evidence following Lincoln’s election to a second term. “When you get to the Second Inaugural Address this is not fatalism at all. This is Providence. It’s actually very sophisticated theological language about the divine attributes of God.” White sees influences from the Westminster Confession of Faith in the Address.

“I think this is an affirmation of faith,” White maintains, who likes to describe it as “Lincoln’s Sermon on the Mount,” borrowing from a newspaper reporter’s eyewitness account of the event.

“When I came to the Second Inaugural I was blown away,” White says. “I looked at this deeply religious content 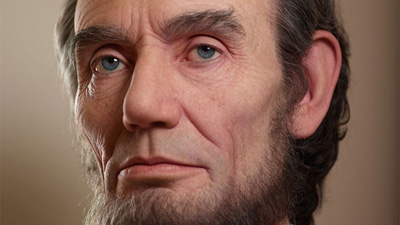 and wondered where this came from.

Evidently, “what had been a personal faith journey became a public expression.”

Frederic Douglas, arguably the greatest African American of the 19th Century, watched the address and at a reception afterward told Lincoln it was “a sacred effort.” In his diary, Douglas wrote, “The address sounded more like a sermon than a state paper.”

Further confirmation came from an unexpected find. After Lincoln’s death his young secretary, John Hay, was looking through his desk drawer in the White House and found a tiny piece of lined paper penned by the president.

The fragment became known as Lincoln’s “Meditation on the Divine Will,”

“The will of God prevails. In great contests each party claims to act in accordance with the will of God. Both may be, and one must be, wrong. God cannot be for and against the same thing at the same time. In the present civil war it is quite possible that God’s purpose is something different from the purpose of either party — and yet the human instrumentalities, working just as they do, are of the best adaptation to effect His purpose. I am almost ready to say that this is probably true — that God wills this contest, and wills that it shall not end yet. By his mere great power, on the minds of the now contestants, He could have either saved or destroyed the Union without a human contest. Yet the contest began. And, having begun He could give the final victory to either side any day. Yet the contest proceeds.”

“This is only eight sentences, but it’s profound. I think it is the predecessor, the foundation, the antecedent of the Second Inaugural,” White notes. “He has been asking, ‘where is God in the midst of the Civil War?’”

“This is his most sincere, deepest thinking and he never thought we would see it. He decides that in addition to the soldiers and generals and himself as commander-in-chief, there is another actor – God is acting in history. It’s a belief in Christian providence, not fatalism.”

“Many reject the faith at 18 or 25 and then life tumbles in, like the death of a child. And at age 50 they reexamine and decide they are open. Is it an orthodox faith? Did he accept Jesus Christ as his Lord and Savior? I don’t know. We don’t know enough.”

“I think he is expressing a profound faith.”