A raped and pregnant 9-year-old girl is among 200 Yazidi captives released by Islamic State fighters in an attempt to demoralize their enemies in northwestern Iraq, the Star world news reported.

Since last summer when the Islamic State rampaged onto the world scene, its jihadists massacred the men and subjected women to rape, forced marriage, torture and enslavement. After eight months suffering barbarism, the women and girls have wandered back to their relatives. They are traumatized and humiliated.

The 9-year-old is the youngest victim, according to international workers at refugee camps.

“This girl is so young she could die if she delivers a baby,” aid worker Yousif Daoud told the Star. “Even a caesarian section is dangerous. The abuse she has suffered left her mentally and physically traumatized.” 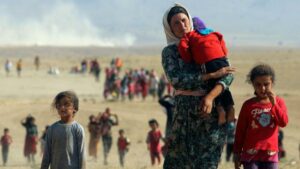 The 9-year-old “was sexually abused by no fewer than 10 men. Most of them were front-line fighters or suicide bombers who are given girls as a reward,” Daoud said.

She was taken to Germany, where she is under the care of medical charity, the Star reported.

Among the 200 released in early April are 40 minors. The majority are elderly. All exhibited the telltale signs of abuse, the Star reported.

The latest group of returning women brings to 500 the total of those who, either escaping or released, have made their way back to the region they call Kurdistan. Still 4,000 women and girls are believed still held in captivity. Reports include accounts of women being held in warehouses and being brought out to be raped multiple times by jihadists as a reward for their fighting. 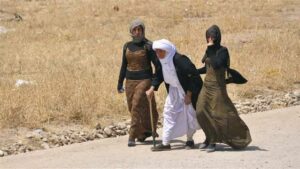 As many as 200 women are pregnant and face a terrible stigma in their religious community. It will be very difficult for them to find husbands and even more difficult to find fathers for the children born of jihadists. Some females are so desperate that they have even resorted to suicide, the Star reported.

“I don’t know what the future would be for their babies,” Daoud said.. “They have suffered so much they just want to forget. If they are married, their husbands won’t take them back if they are pregnant. And it’s clear that the babies will never be accepted.”

The extremist terrorists who established a “caliphate” of seized territory between Iraq and Syria are on the retreat and leaving desolation in their wake. They have shown shocking ruthlessness with anyone who doesn’t buy into their toxic brand of Islam.