The First Wave of Jews coming to Jesus hit in the 1970s in America. The Second Wave were Russian Jews in the 1990s. And now – in what some observers call a Third Wave – Jews in Israel are coming to faith in increasing numbers.

“I have never seen the breakthrough like we’re seeing now,” said Tuvya Zaretsky, chairman of the board for the Israel branch of Jews for Jesus. “We’re seeing a steady stream of Israelis who are coming to Jesus from all walks of life, though usually among the young. There seems to be a greater openness to spiritual input. We’re thinking it’s a Third Wave of in-gathering.”

In the 1990s, there were about 3,000 Messianic Jews in Israel; today there are as many as 20,000 (still less than 1% of the population), said Simon Stout, executive assistant of Jews for Jesus in Tel Aviv. Also, one source estimates 150 congregations of like-minded believers in Israel. Of Israel’s 84 cities and towns, 81 have at least one messianic Bible study. 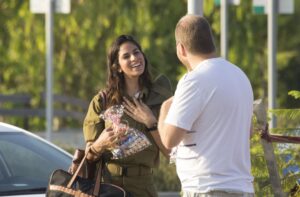 “It’s been a very unusual turning in Israel,” said Zaretsky, who’s been traveling to Israel since 1971. “The community of believers there has solidified. They’ve found their voice. There’s less antagonism. The situation is changing.”

When Jews for Jesus launched its Israel branch in 2000, its banners were torn down and workers beaten up by ultra-orthodox Jews who associated Christianity with the Holocaust. Now, Jews for Jesus has a staff of 31 and the world political situation has sparked greater interest in Jesus, Zaretsky said.

After World War II’s Holocaust killed 6 million Jews, Israel was created by decree of the United Nations as a safe place for Jews. But now many Israelis feel more imperiled than ever. Iran, which is feared to be close to producing nuclear weapons, is constantly threatening Israel’s destruction. On the streets of Israel, terrorism is a constant.

“Young people generally feel very little hope for the future and are therefore more open to the gospel,” said Zaretsky, a founder of Jews for Jesus.

With half the country’s population, Tel Aviv is where Jews for Jesus runs a 3-story discipleship center which hosts coffee house activities, art shows and other events to bring in neighbors in the trendy Florentine neighborhood. A brief presentation of the gospel is always given; literature is on hand, and messianic Jews are present for anyone curious. 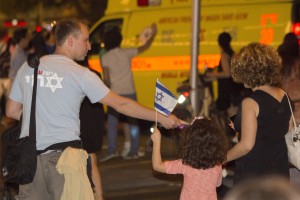 In 2008, research showed that most Israelis had very little concept of who Yeshua was. They knew him by the name Yeshu, a corruption of his name imposed by the rabbis to expunge Christianity from Judaism. While Yeshua is related to Yeshuah, which means “salvation,” Yeshu is an acrostic that stands for “Cursed be his name and his memory.”

So Jews for Jesus took to the streets with banners to educate Israelis about Yeshua. The placards read: “Yeshu = Yeshua = Yeshuah” and included the phone number of the Jews for Jesus office. They took out ads in the newspaper with this motto and placed it on billboards and buses. The ultra-orthodox tore the signs down. Now workers hold up banners along streets and highways at different times. 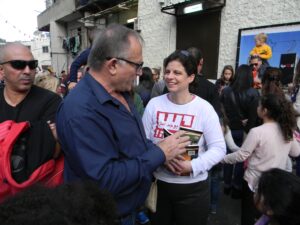 Ben, an 18-year-old high school student from northern Israel, (not his real name) contacted Jews for Jesus personnel through its website two months ago. Igal, a missionary intern, talked to Ben via Skype and found out that his mother was a believer. Igal shared with him his personal testimony about how God set him free from drugs and brought him peace, encouraging Ben to believe that Yeshua would do the same for him, Stout said.

Ben agreed to study more about Yeshua and actually stated that he wanted to give Yeshua a chance to work in his life. Igal prayed daily for Ben and talked to him once a week. Just this month, Ben prayed with Igal to accept Yeshua as his Messiah, Stout said.

“People are receiving Christ at a fairly constant rate,” Stout said. “They’re coming in ones or twos each month. It’s not a speedy process. There are cultural barriers for Jews to accept Jesus Christ.”

Stout was himself a non-believing, reformed Jew from Indianapolis who visited Israel on a government-subsidized tour in 2001. First he saw the horrors of concentration camps in Poland, where Jews were imprisoned and killed wholesale as part of Hitler’s anti-Semitism during World War 2. 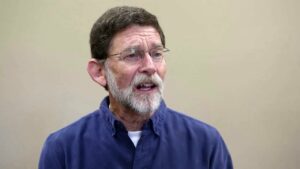 Leaving behind the dreary memorials and the cold weather, Stout landed in Israel when it was warm and lovely. “The first time I saw Jerusalem, there was a rainbow over part of the city,” he said. “There was something inside me that told me that there was a reason for me to be in Israel. I had this feeling that there was a God and He had a purpose for Israel.

“I felt God must be real because only He could have taken the horrors of World War II and birth a nation and bring us back after 2,000 years,” he said. But it wasn’t until years later that Stout accepted Jesus when he came to Israel to study for a master’s in education.

A friend from a messianic congregation invited him to visit. In Indianapolis, his only exposure to Christianity were school kids telling him he would burn in Hell for being a Jew; he also saw Jewish houses get egged, he said. Despite the bad first impression with Christianity, he wasn’t completely closed to hearing about Jesus.

For two months, he attended Bible studies and fellowship groups. Then one night he had a dream about a flood in New York and a flood in China. When he attended a Bible study about prophetic dreams, he hoped to find an interpretation. Instead the lady conference speaker prophesied over him: “God hears your prayers. Yeshua is real, and He has great plans for you.”

Stout broke down crying. He accepted Yeshua and was baptized in the Mediterranean Sea. He decided to remain in Israel, where he has married and had two children. Originally, he taught English literature but two years ago started working with Jews for Jesus.

Another ministry of Jews for Jesus is its “Massah” outreach in India. Surprisingly, the Himalayas are a favorite hiking mecca for Israelis after they complete their mandatory military service at about age 20. Secular Jews, in particular, use the getaway to take drugs and forget the stressful experience of constant war threat in Israel, Zaretsky said.

For 5-6 weeks during the summer, there are so may Israelis in the Himalayas that entire restaurants and coffee houses are filled with Jews. There are even Hebrew-speaking waiters and Hebrew menus to cater to the sub-culture diaspora.

There’s something about the mystique of India, with its varied spirituality, that seems to open Jewish youth to talk about alternatives. It’s the perfect spot to strike up a conversation about Yeshua. So yearly, the Israeli branch of Jews for Jesus forms a team that travels to India for ministry.

“India is a relevant place to talk about spirituality and belief,” said one Messianic Jewish believer on a YouTube video about Massah. Another recounted about sharing the gospel with a Jew who, intrigued, told her: “This whole talk we’ve had would not have happened if we were in Israel.”

The parents of Shmuel Salway immigrated with his family from India and now the 42-year-old is associate pastor of the Adonai Roi congregation, which has functioned in Tel Aviv for 19 years. It’s now a church of 100 members.

“We just had five baptisms last month,” Salway said. “The Jews are coming back to the land, and they’re coming to know the Messiah. We’re living in prophetic times. I believe Yeshua will come back in our lifetime. He’ll come back when many more Jews come to Messiah and cry out ‘Baruch Haba B’Shem Adonai‘ – Blessed is He who comes in the name of the Lord.”

Controversial 1988 prophecy and the fall of Afghanistan