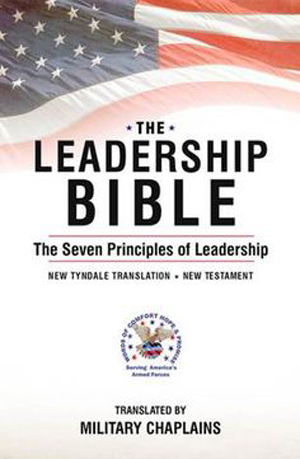 The New Tyndale Translation (NTT) New Testament, translated by military chaplains, is a recently-released Protestant translation, published by the Military Chaplains Fellowship, and used in a new military Bible called The Leadership Bible: The Seven Principles of Leadership.

The NTT is an English Bible translation of the New Testament. The translation was commenced on May 17, 2003 and completed on August 18, 2013. Edited by Verna M. Linzey, the translation is an update of the Tyndale Bible, using the Majority Text. The translation committee is ecumenical, composed of 11 American and English scholars in the Orthodox and Protestant traditions.

The translators used the Tyndale Bible as a reference. The philosophy underlying the NTT is formal equivalence, meaning the translation is as literal as proper English syntax and grammar allows. A sample of the translation is John 3 :13, stating, “For God so loved the world, that He gave His only begotten Son, that whoever believes in Him should not perish, but have eternal life.” The translation is considered Protestant since the Majority Text is one of the Greek texts used by Protestant scholars and the Tyndale Bible is an English Bible. The Majority Text is similar to the Textus Receptus, both being in the Byzantine Text family.

The Tyndale Bible is the corpus of translation work by William Tyndale, the first English translation from the Hebrew and Greek. Tyndale began work on his New Testament in 1522, during the reign of King Henry VIII. The Greek text he used was compiled by the Roman Catholic scholar, Erasmus. Erasmus’ Greek New Testament was later called the Textus Receptus, which was derived from manuscripts older and more authoritative than the Latin Vulgate of St. Jerome (A.D. c.340-420).

The Bishop of London, Cuthbert Tunstall, called Tyndale’s translation heretical because Tyndale was not given permission to engage in such work. At the time, the Church of English was part of the Roman Church which had only sanctioned the Latin Vulgate. So Tyndale went to Europe’s mainland to do his work.

Tyndale’s sources included Erasmus’ Latin New Testament, Martin Luther’s German translation of the Vulgate, and possibly the Hebrew Pentateuch, the Polyglot Bible, and the Septuagint. It is commonly accepted that Tyndale influenced modern English more than any other person, including William Shakespeare. Phrases penned by Tyndale are still used in the modern vernacular such as “Blessed are the peacemakers” (Matthew 5:9). He rescued from obscurity the term “thou,” used in ecclesiastical English.

In 1535, Tyndale was arrested near Brussels. He was imprisoned in the castle of Vilvoorde (today called Filford). He was charged with heresy in 1536 and sentenced to death by strangulation, and then burned at a stake. Before his execution, he prayed God to “open the eyes” of Henry VIII. Two years after Tyndale’s execution, God answered his prayer. Henry VIII had pulled the Church of England out of the Roman Church, became the Defender of the Faith, authorizing The Great Bible as the authorized version of the Church of England. The Great Bible incorporated most of the Tyndale Bible. Consequently, Tyndale’s translation was also used in the Geneva Bible and the King James Version, impacting the British Empire and all of modern English and Christianity.

The NTT preserves the legacy of Tyndale. It is used in The Leadership Bible by Military Chaplains. The Leadership Bible presents the “Seven Principles of Leadership,” military prayers by military chaplains, military hymns, military creeds, military core values, the military code of conduct, military oaths of office, the Pledge of Allegiance, quotes on religious freedom by the Founding Fathers and presidents of the United States, the “Covenant and Code of Ethics of Chaplains of the Armed Forces,” “The Original Statue of Liberty,” and “The History of Military Chaplaincy.” This military Bible is the first to be endorsed by retired Generals and Admirals from each of the five Armed Forces, as shown on the back cover.

Since The Leadership Bible was released in August 2013, thousands have been donated to the troops and purchased by pastors across America. In August 2013, Cynthia Martinez, president of Words of Comfort, Hope and Promise, who has raised funds to donate many of The Leadership Bibles to the troops, showed a copy on “Joy in the Morning” airing on Trinity Broadcasting Network (TBN). On November 3, 2014, she gave one to actor Kirk Cameron after Kirk hosted the “Praise the Lord” program at TBN in Costa Mesa, California. “Prayers for the continued dissemination of God’s Word, regardless of which legitimate translation, are greatly needed,” said Verna Linzey, chief editor. Verna Linzey is an honorary military chaplain, authorized by David Plummer, endorsing official of Coalition of Spirit-Filled Churches. She is also one of the founding directors of Military Bible Association.

On Veteran’s Day, November 11, 2014, at the 2014 Veteran’s Day Recognition Ceremony, NTT translator, Chaplain, Major Thomas A. Johnson, USAF (Ret.), presented a copy of the first edition of The Leadership Bible to the Gwinnett County Veteran’s Museum in Lawrenceville, Ga., the largest veterans’ museum in Georgia. The Bible is now prominently displayed beside the World War II Bible in the front entrance display case of the museum.

Chaplain David M. Wagner, chaplain for the police department of Riverside, Calif., is the director of Military Chaplains Fellowship and publisher of The Leadership Bible.