Every side of his pickup truck was completely smashed and compacted after Kaleb Whitby struck a semi from behind and was then hit by another semi in a highway pileup caused by morning fog and black ice.

Whitby literally walked away unscathed – with just two Band-Aids – after his Chevy Silverado was banged, spun, and ultimately came to rest in the vice-grip of parallel semi trucks. By God’s protective hand, he narrowly escaped death.

“I do believe in God. I do believe He protected me,” Kaleb told GodReports.com. “I don’t know if it was an army of angels that held those trucks apart, but I know it wasn’t my strength. I have faith that somebody was there to protect me.”

The 27-year-old Mesa, Washington, resident left Baker at 5:30 a.m. on January 17th headed for Council, Idaho to pick up goods for his farm. It was cold and driving conditions were dicey, but he hoped for incident-free travel.

Out of the fog emerged a semi jack-knifed across the lanes of I-84. Kaleb down-shifted and braked as he headed downhill, but it was to no avail. His front bumper clipped the back of the semi, and he swirled around so that his passenger side faced oncoming traffic.

Then he was startled by the headlights of another semi that emerged from the fog. 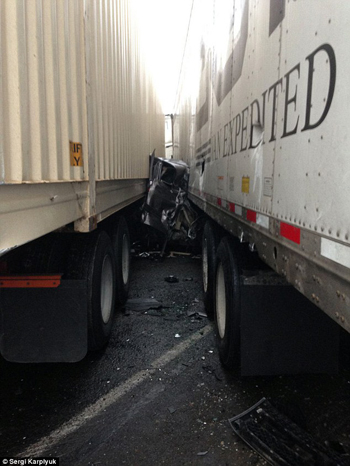 “I closed my eyes and said a prayer,” Kaleb said. Glass shattered and metal crunched like a soda can as every part of his pickup compacted between the two trucks.

After the horrific accident, he sat there, taking it all in. Miraculously, he was okay! God had answered his prayer in a remarkable way. In all, 26 cars fell prey to the foggy conditions and joined the buildup of smashed vehicles.

After about ten minutes, Kaleb called for help, and a trucker helped him get out. But first, he asked if he could snap a picture. It was just mind-boggling how Kaleb could have survived. “You’re never going to believe how tight it is,” the trucker told him while he was wedged in.

Kaleb was taken to a hospital in Baker City, mostly to get warmed up. Then his parents picked him up and drove him home, where he gave his pregnant wife and two-year-old son a huge hug. He was grateful to be alive. “It was good to give him a hug,” Kaleb said.

On Saturday worked with the cattle on his farm, changed ear tags, vaccinated and administered de-worming treatments. He has no lingering physical condition related to the accident.

“There are some things in life you have no control over,” Kaleb said. “This accident was a testimony to me that God has everything under control.”

If you want to know more about following Jesus, go here