Donna Douglas, the curly blonde bumpkin actress who played Elly May Clampett with infectious Southern charm on “The Beverly Hillbillies,” left us in 2015 at the age of 81.

She graduated to heaven on the first day of January surrounded by friends and family following a battle with pancreatic cancer, according to news sources.

“The Beverly Hillbillies,” a comedy about a backwoods family who moved to Beverly Hills after striking it rich from their Ozarks oil well became an immediate hit when it first aired on CBS in 1962.

The series starred Buddy Ebsen as patriarch Jed, Irene Ryan as Granny, Max Baer Jr. as Jethro and Douglas as Elly May, a backwoods bombshell with pigtails, and tight jeans usually cinched with a rope belt.

“She had a heart for the Lord,” says Sandy Barnett, who heard her speak and share her Christian testimony a few months ago at Calvary Missionary Baptist Church in Henderson, Kentucky. “She is walking through those pearly gates right now.”

Prior to the show’s start in the early ‘60s, Douglas had very little acting experience and had never traveled very far from her home, which was outside Baton Rouge, Louisiana.

While she never planned to be an actress, “That’s just how my life has unfolded,” she told the Lincoln Times-News. “You gradually move into what your life’s supposed to be.”

When she graduated high school, she considered herself to be naïve, idealistic, shy and awkward. An early marriage ended in divorce and produced one son, whom she sent to live with her parents while she went to New York to pursue a career.

“I had never been away from home,” she told the Times-News. “I grew up poor. My parents didn’t have a car. I 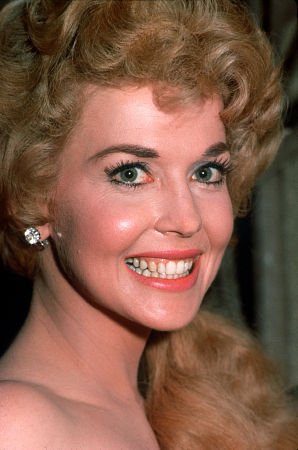 never had a background for show business.”

She recalled her first airplane flight north when a man at the New Orleans airport asked if she wanted to change her plane reservation so that she could arrive at her destination an hour earlier.

“I didn’t even know they had two airports in New York,” she said.

Despite the fact that she was brought up in a Christian home, she wasn’t very strong in her faith.

“I loved Jesus, but I didn’t know the Word of God,” she told the Times-News.

But after she arrived in New York, she decided to trust Jesus completely with her future and build her life on His firm foundation. “I made a commitment to God,” Douglas said.

After living in the northeast for a few years, Douglas moved to Hollywood and captured producers’ attention at an open-call audition for “The Beverly Hillbillies.” She had prayed that she would get a role on a family-oriented show – and this seemed to fit perfectly.

However, following her audition, Douglas suffered an auto accident that resulted in her hospitalization for more than two weeks.

As she recuperated in the hospital, she prayed once more and asked God to let her have the show’s role if she was ever released from medical care.

Because of the hospital stay, she almost lost the chance to become Elly Mae. The show’s producers had narrowed the field to five young women including her, and Douglas only had a couple of days to screen test.

“I was pretty wobbly, but you better know I was there,” she told the Times-News.

After nine years on CBS (1962-1971), with two consecutive years as TV’s top program, “The Beverly Hillbillies” was canceled, which was not expected by the cast.

“I didn’t know it was going to end,” she said. “They kept telling us we would be coming back for next season and then they would say no and kept see-sawing back and forth. We never had a farewell finale.”

Douglas considered her time on the show a real high point of her life and felt blessed to have Buddy Ebsen (Jed Clampett) and Irene Ryan (Daisy Moses) as positive role models.

She specifically noted her admiration for Ebsen. “He was such a wonderful man very much like my own father, a quiet and reserved and caring person,” she told the Times-News.

However, she would often pray for unsuccessful auditions if the role wasn’t family-friendly.

While her character Elly Mae often wore short shorts and a belly-bearing top, it was a far cry from Hollywood’s current level of depravity.

“I could show no cleavage or buns or belly-button,” Douglas told the Times-News. “And we couldn’t say

anything out of line.”

In her final years, Douglas spent most of her time speaking at churches and other groups, sharing her life, but always focusing on the importance of God’s Word and establishing a Christian foundation at an early age.

“If you have that willing heart, it’s amazing what He can do,”Douglas said. “God brought people into my path to make a way for me.”

She had a big heart for young people. “They have so much pulling on them in every direction to deceive them in so many ways,” Douglas said.

“I try to encourage them that nobody can be better you than you. If you want God’s best for you life, it’s out there for you. That’s what my life shows, that you don’t have to compromise.”