Philippines-born Tim Tebow, famous for taking a knee and praying mid-game as an NFL quarterback, has now made a touchdown pass off the gridiron: a pediatric hospital under his tutelage opened for business this Christmas.

“I have always had a great love and passion for the Filipino people,” Tebow said in a statement. “It is so exciting to be able to provide healing and care for these incredibly deserving children halfway around the world.”

In the Fall of 2011, Tebow joined forces with CURE International to build a 30-bed orthopedic hospital in Davao City. His Tebow foundation helped raise the $3 million to fund construction and staffing.

While health services began last week, the official grand opening won’t be until spring of 2015. A 5-story building, the Tebow CURE Hospital will treat clubfoot, bowed legs, cleft palate and other congenital limb abnormalities among impoverished Filipinos who otherwise would not receive any treatment.

“These are simple procedures we take for granted in the U.S.,” said Erik Dellenback, executive director of the Tim Tebow Foundation in a statement. “The reality is that we hope to show people in the Philippines that there is faith, hope and love out there. We want to show that the Western world cares about them and that they’re not a deserted nation.”

Born to missionaries in Makati, Philippines, in 1987, the 6’3” 236-pound quarterback led the Denver Broncos to the AFC West title in 2011. Just about any time he made a stellar play, he would take a knee and bow his head as a visible sign of praise to God – a signature act that became known as “tebowing” in popular culture.

Tebow was the first sophomore to win the Heisman Trophy in 2007 for his crushing performance with the University of Florida Gators. When he painted “John 3:16” on his eye black for the 2009 BCS championship game, the verse spiked as Google’s highest-ranked search for 24 hours with 90 million views. 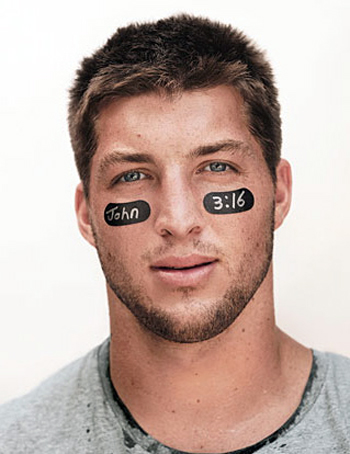 Now, Tebow is a college football analyst with ESPN while he continues to train in hopes of being contracted as a free agent quarterback.

The new hospital will be the 12th built by CURE, a Christian non-profit dedicated to providing medical help to some of the poorest people in the world. The 30-bed, 3-operating-room facility will be staffed by 54 medical and other personnel. The hospital opened its doors in a limited fashion this week after winning authorization from the Filipino Department of Health.

“Even though medical infrastructure is available in many parts of the Philippines, these children and their families are so poor they can never hope to afford the type of care needed,” said CURE’s CFO Mark Knecht in a statement. “Access to Tim’s high-profile platform will allow us to heal more kids and impact more lives than ever before.”

In addition to lending his fame to CURE, Tebow supports more than 40 Filipino evangelistic efforts in the archipelago.

When his mother, Pam, was pregnant with Tim, Filipino doctors counseled her to abort because he was a “fetal tumor” or a “mass of cells,” the Christian Post reported. A Christian with pro-life convictions, Pam refused and gave birth to Tim. Now, the football star lends his fame to the pro-life movement.

Meanwhile, Tebow’s NFL career has sputtered. After some success with the Broncos, Tebow was traded to the New York Jets in 2012 and then to the New England Patriots in 2013, but he didn’t play much and was released. He’s worked for ESPN as an analyst since then and hopes to reignite his NFL career.

“Regardless of what happens, I still honor my Lord and Savior Jesus Christ, because at the end of the day, that’s what’s important, win or lose,” Tebow said, as reported in Wikipedia. “We need to get back to one nation under God, and be role models for kids.”