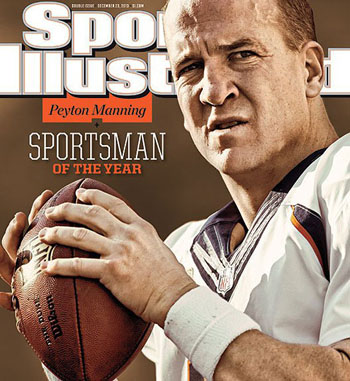 The most important moment in quarterback Peyton Manning’s life was NOT when he surpassed the NFL record of 509 touchdown passes. It wasn’t any of his league-record five MVPs. It wasn’t his Superbowl championship. And it wasn’t being named player of the decade of the 2000s by Fox News and Sports Illustrated.

The most emotional and dramatic moment of his life came when the Denver Broncos quarterback accepted Jesus Christ as his Savior and Lord.

“My faith has been number one since I was 13 years old and heard from the pulpit on a Sunday morning in New Orleans a simple question: ‘If you died today, are you one hundred percent sure you’d go to heaven?’” Manning writes in his book “Manning.”

“My heart was pounding,” he writes. “The minister invited those who would like that assurance through Jesus Christ to raise their hands, and I did. Then he invited us to come forward, to take a stand, and my heart really started pounding. And from where we sat, it looked like a mile to the front.

“But I got up and did it. I committed my life to Christ, and that faith has been the most important to me ever since.”

Manning displays his faith on the field more quietly than some other players.

“Some players get more vocal about it – the Reggie Whites, for example – and some point to Heaven after scoring a touchdown and praise God after games,” he writes. “I have no problem with that. But I don’t do it and don’t think it makes me any less a Christian. I just want my actions to speak louder than words.”

Part of Manning’s “actions” include the Peyback Foundation, which he started to help disadvantaged kids in his home state of Louisiana. After Hurricane Katrina decimated New Orleans in 2005, Manning and his brother Eli, who is a quarterback for the New York Giants, helped pack and deliver potable water and other emergency supplies to the affected.

“I make it a point when I speak to groups about priorities, and when it’s school kids, I rank those priorities as: faith, family, and education, then football,” Manning writes. “I tell them that as important as football is to me, it can never be higher than fourth. My faith has been number one since I was thirteen years old and accepted Jesus.”

While he instills faith in Christ off the field, Manning infuses faith into his team on the gridiron. Known as the ‘Sherriff’ for calling plays from the line of scrimmage instead of the huddle, Manning scans the defense and marshals the offense to exploit any perceived weaknesses. A mastermind quarterback, he jockeys with Tom Brady for the moniker “best.”

“I pray every night, sometimes long prayers about a lot of things and a lot of people, but I don’t talk about it or brag about it because that’s between God and me, and I’m no better than anybody else in God’s sight,” Manning writes. “I’ve been blessed—having so little go wrong in my life, and being given so much.”

But he’s also had struggles. A herniated disk in his neck caused him pain for years. After a surgery in 2011 successfully alleviated the pain, a pinched nerve debilitated his throwing arm. During rehab he threw and the ball sputtered clumsily to the ground. Then he re-injured the herniated disk. A second surgery was performed.

Manning is an intense competitor who watches game videos three times before the coach shows it to the team. He trains incessantly. But after his surgery he was helpless. If he trained too hard it would risk re-injury.

“Sometimes progress was not going backwards,” he told the Washington Post. “It was just a real test of patience unlike anything I had to go through. There was nothing I could do about it.”

Manning spent the entire 2011 season sidelined, and in March 2012, the Colts released him. It appeared that his long, successful football career was over.

Instead of wallowing in self-pity, Manning considered his older brother’s injury. Cooper was an all-state wide receiver with a scholarship to Ole Miss when he suddenly experienced numbness and mysterious atrophying in his right bicep.

The Mayo Clinic in Minnesota detected spinal degeneration. The operation was beset with complications and Cooper spent weeks subsequently in a wheel chair. His football days ended abruptly.

The memory helped Peyton keep things in perspective. “I just thought, wow, I got almost 20 years out of this neck. Boy, I’m grateful for the time I’ve had,” he told the Post.

But the end of his football career was hardly over. The Denver Broncos signed him on March 20, 2012, not without concerns over his recovery. By October, Manning had “silenced his critics,” according to ESPN.

In 2013, Manning led the Broncos to the Super Bowl against the Seattle Seahawks. Despite losing, he made a Super Bowl record of 34 completions.

In pre-Super Bowl controversy, Seahawks cornerback Richard Sherman taunted Manning, garnering the antipathy of much of the football public. In the game, Sherman sprained his ankle and was taken out of play.

Manning lost 43-8 in the largest point differential in Super Bowl history. But he held his head high and demonstrated Christian class – he went over to the Seahawk sideline and inquired about Sherman’s ankle.

“He was really concerned about my well-being,” said a thunderstruck Sherman, quoted on Bleacher Report. “After a game like that, a guy who’s still classy enough to say ‘How are you doing?’ To show that kind of concern for an opponent shows a lot of humility and class. I could learn so much from him.”

The quiet Christian walk is Manning’s trademark. “I consider myself fortunate to be able to go to Him for guidance, and I hope (and pray) I don’t do too many things that displease Him before I get to Heaven myself,” Manning writes. “I believe, too, that life is much better and freer when you’re committed to God in that way.