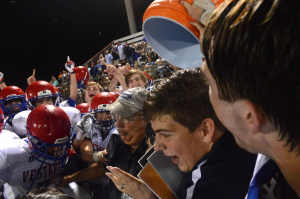 Vestavia’s 14–3 win over Hewitt-Trussville High School on Sept. 12 brought his career record to 310–126–0, surpassing the previous record of 309–126–3 set by retired Fayette County Coach Waldon Tucker, according to the Alabama High School Athletic Association. Anderson has been Vestavia’s head coach for 37 years and was inducted into the AHSAA Hall of Fame in 2003.

Anderson credits his parents for laying the spiritual groundwork that led to his decision to commit his life to Christ at a revival service when he was 8 years old.

Even at that early age, sports were important to him.

“I remember talking to my mom the night I got saved, and she said, ‘Maybe God has a plan for you in sports,'” Anderson recalled.

A few years later the three-sport high school senior told his dad, Dovey, a 31-year high school coach and 1991 inductee into the AHSAA Hall of Fame himself, that he felt God calling him to be a Christian coach.

“I had been praying for years to find what God wanted me to do, and that night I became convinced that God wanted to me to coach,” he said.

After graduating from Thomasville High School, Anderson earned his teaching degree at Samford University in Birmingham, where he played football. He was hired to teach at Vestavia in the fall of 1972.

Anderson said his faith has been an important part of his coaching philosophy throughout his career. He credits “a lot of great coaches, a lot of great kids and a great community” for his success, but he said it would not have happened without God’s providence. He recalled three specific times when he saw God’s hand at work.

The first happened during his senior year of college. He and his wife Linda attended a game between Mountain Brook High School and Vestavia, after which Linda, a Mountain Brook grad, described feeling a “pull” toward Vestavia.

That spring, when Anderson began looking for a job, a friend suggested Vestavia and a former coach set him up with an interview with then head coach Thompson “Mutt” Reynolds. The interview was unusual, Anderson said, because Reynolds never asked him how much he knew about offense or defense. Instead he asked him what his plans were. Anderson didn’t hesitate.

A few years later Vestavia had experienced several coaching changes and Anderson was frustrated because he knew how difficult such inconsistency was on young athletes. During his morning devotion time he prayed about his calling, thinking that maybe coaching wasn’t God’s plan after all. Less than three weeks later, Anderson was named head football coach at Vestavia.

“As He had before, God said, ‘Let Me handle this,'” Anderson said.

Knowing God had placed him as head coach didn’t always make things easy, especially on his family, Anderson said. A coach spends a lot of hours away from home, but it is worth the sacrifice, as Linda told Birmingham’s Fox 6 News after the record-setting game.

Though uncertain about the life of a football coach’s wife at first, Linda realized what the call meant at a national Fellowship of Christian Athletes Conference.

“That week as I listened to more than 900 athletes singing, strong arms embracing shoulders, my eyes glistened with tears as I heard God say, ‘This is why I called Buddy to be a coach, and I’m calling you too to a special ministry. I need you to support, to love, to open your home for (FCA) Huddle meetings. … I want you to have the kind of Christian home that will be an example to young men and women,” Linda recalled in a 1998 interview with The Alabama Baptist.

Anderson said he has always wanted to use the talents God has given him through coaching, and he is thankful to have had longevity and success at Vestavia.

“I never dreamed I would still be here 42 years after I started, but God has been faithful to the calling throughout,” he said.–BP