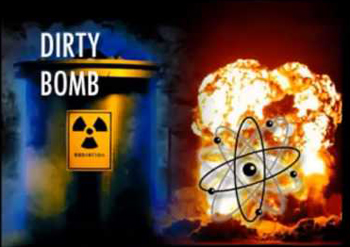 ISIS may be building a crude nuclear weapon sometimes called a dirty bomb using radioactive uranium stolen from Iraq’s Mosul University in June, according to a story in The Mirror.

A dirty bomb is a rudimentary nuclear weapon that combines radioactive material with conventional explosives. The purpose of the device is to contaminate the area around the explosion with radioactive material, wreaking havoc in densely populated urban environments.

“Terrorist groups have seized control of nuclear material at the sites that came out of the control of the (Iraqi) state,” Alhakim stated in the letter.

One of the extremists who made the Twitter threats is a British-trained explosives expert, Hamayun Tariq, who became radicalized and left his home in the UK for the Middle East in 2012.

Using a creative alias – “Muslim-al-Britani,” he tweeted, “O by the way, Islamic State does have a dirty bomb. We found some radioactive material from Mosul University. We’ll find out what dirty bombs are and what they do. We’ll also discuss what might happen if one actually went off in a public area.”

It is believed the device under development includes uranium from a stockpile of 40 kilograms looted by ISIS from the university.

If a bomb is developed, terrorists are more likely to use it in Syria or Iraq, rather than attempting to smuggle it into the U.S. or UK, some observers maintain.

ISIS grabbed headlines in August, when its fighters carved a path through northern Iraqi and took the city of Mosul, then overran swaths of terrain north and west of Baghdad.