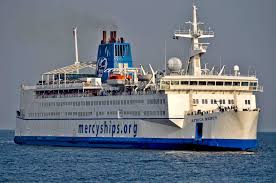 While U.S. President Obama sends ships and troops to West Africa’s Ebola zone, for the first time in its 36-year history, Mercy Ships, operating the world’s largest civilian hospital ship, has canceled a scheduled port – expanding costs, lengthening travel time, reassigning volunteers. Fitted solely for surgeries and specific non-disease treatments, and with a volunteer professional crew and staff, the NGO has postponed its intended field services to Guinea and Benin, adjacent to West Africa’s Ebola outbreak, to serve instead in the Republic of Madagascar.

“A Mercy Ship in dock attracts thousands of people from hundreds of miles, a potential disaster for a country near an outbreak,” Mercy Ships President and Founder Don Stephens said. “So, yes, Guinea and Benin are disappointed, as are we. But there also is relief. We’ll return to West Africa, of course,” he added, “when the situation stabilizes.”

The President of the Republic of Madagascar, his Excellency Hery Rajaonarimampianina, meanwhile is pleased to welcome Mercy Ships for the second time ever. The last visit was in 1996, when the ship had but three operating rooms, Stephens said. The current Mercy Ship packs at least four times greater capacity to serve individual patients and the nation’s healthcare delivery. Besides the pathologies its specialists address, Mercy Ships training and capacity, at no charge, will help in the government’s work to strengthen the country’s healthcare infrastructure. 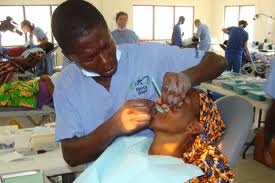 For more than three weeks, monitoring the Ebola outbreak, the Mercy Ship, waited in waters outside the Canary Islands where it had been dry docked for annual repairs. With news of the new destination and timing, many volunteer physicians had to cancel and remain at their regular practices, Stephens said, and the next volunteers are readjusting plans.

“The Madagascar delay and distance takes us around the Cape, with new logistics costs for a crew from many parts of the globe,” Stephens said. “While the U.S. project mobilizes, we’re making myriad phone calls reworking schedules for a volunteer army.”

The Mercy Ship left the Canary Islands in mid-September; it will stop over in Cape Town, South Africa, to refuel and add crew, aiming to arrive in Tamatave, Madagascar, in late October. Guinea and Benin, meanwhile, are far from forgotten. Through PQMD-Partnership for Quality Medical Donations-Mercy Ships is part of a coordinated response to the nations currently affected by Ebola, through the partnerships sourcing free ocean freight for up to 20 shipping containers worth of supplies.

With five state-of-the-art operating rooms, the Mercy Ship is a fully modern hospital, specializing in maxillofacial, reconstructive, plastics, orthopedic, ophthalmic, dental, and obstetric fistula surgeries. Doctors onboard expect to serve thousands of people during the 16,500-ton floating hospital’s months in port. All surgeries and care are at no cost to the Malagasy people, and Mercy Ships focuses the ship’s services on people with little or no access to specialized surgical healthcare.

Madagascar is located off the coast of southeastern Africa. More than 43 percent of its 22 million-plus inhabitants are not yet age 20, and the nation ranks 151 out of 187 countries in the U.N. Human Development Index. In recent years a protracted political crisis has hobbled the nation’s ability to meet significant millennium-development goals and severely damaged Madagascar’s economy and people, especially the most vulnerable.

Mercy Ships uses hospital ships to deliver free, world-class healthcare services, capacity building and sustainable development to those without access in the developing world. Founded in 1978 by Don and Deyon Stephens, Mercy Ships has worked in more than 70 countries providing services valued at more than $1 billion, treating more than 2.5 million direct beneficiaries. Each year Mercy Ships has more than 1,600 volunteers from more than 40 nations, approximately half of them from the U.S. Surgeons, dentists, nurses, healthcare trainers, teachers, cooks, seamen, engineers, agriculturalists and others donate their time and skills. Mercy Ships seeks to transform individuals and serve nations one at a time.

Please continue to pray for the people and missionaries to West Africa; that Ebola is conquered and eradicated completely.–Christian Newswire