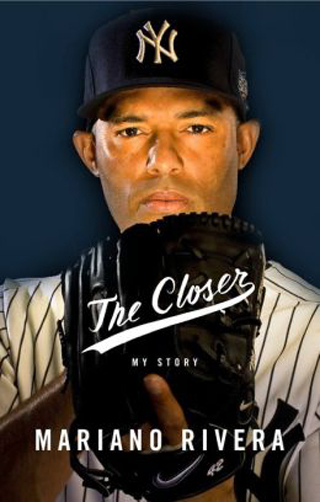 Plucked from the obscurity of a Panamanian fishing village where he lived in a two-room house, he became the greatest relief pitcher of baseball history in “The House That Ruth Built” – New York’s Yankee Stadium. At every step, he gave credit to God for his success, acknowledging the Lord as the one who empowered his brilliant career.

Mariano grew up along the shores of the Gulf of Panama, in Puerto Caimito, where his father captained a 90-foot fishing vessel. His “dingy cement home on a dirt road” had a beat-up tin roof and no electricity or running water when his parents moved in.

“The shore is where I become an athlete,” he writes in his autobiography “The Closer” (Little, Brown and Company), written with Wayne Coffey. “At low tide it is the best playing field in Puerto Caimito.”

Mariano didn’t try on a real baseball glove until he was 16. Until that time, he and his friends fashioned together gloves from “a milk carton, a bat from a stick,” and a ball made from wrapping a rock in fishing nets and tape, as they played along the shore.

He dropped out of high school in the ninth grade and began working on his father’s fishing boat so he could earn $50 a week for mechanic’s school, he relates in the book.

When Mariano was 18, he noticed a striking change in his cousin, Vidal Ovalle, and he asked him about it.

“I have come to know the Lord,” Vidal told him. Vidal began to witness to Mariano by sharing Bible stories with him. Mariano noticed his cousin’s passion about his faith, and his newfound peace and happiness.

Mariano had known Vidal his entire life. Now, suddenly, he was a different person. “Vidal is the first one to really teach me about the Bible, and what it means to know Jesus, and to know what he did for us, dying on the cross to forgive our sins.”

But even as Mariano listened to his cousin and examined the Scriptures himself, he was not ready to surrender his life to Jesus Christ.

Five years later, he sat in a small cement church near the center of Puerto Caimito, not far from the dock where his father kept his boat. As the pastor finished his Sunday sermon, he asked, “Does anyone who hasn’t done so yet want to accept the Lord as their personal Savior?”

As Mariano reflected on his life, he sensed a battle being waged inside between the flesh and the Spirit for ultimate control.

But after a brief moment he surrendered to God, felt his heart open and a new tenderness to the Word of God. Then the Holy Spirit descended from above, touching him at the core of his being.

Mariano raised his hand and walked forward to receive prayer. Immediately, he felt a burden lifted from his shoulders. “It is the burden of feeling you have to do it by yourself, of feeling alone and overwhelmed by your own limitations. He felt the Lord giving him a chance to be “a different person, to free me from my sins, to be joyous and free.”

Looking back, his baseball career developed without any planning for the greatness that might lie ahead. At 13, Mariano began to travel around Panama as part of a provincial baseball team. When he reached 18, he was invited to play for the Panama Oeste Vaqueros in Panama’s top adult league.

He played a variety of positions; his favorite was playing outfield. One day the Vaquero’s best pitcher got into a bind, with the other team seemingly scoring at will. The manager came out to the mound and motioned to Mariano, who was standing in right field.

Why is he looking at me? he thought. He can’t mean me. I am not even a pitcher.

Mariano was unexpectedly thrust into a position he hadn’t even attempted since he was 14. He admits it felt “totally bizarre to have my foot on the rubber, to try to come up with some motion on the spot.”

Unexpectedly, his pitching saved the game for his team. “I’ve always had a good arm, a loose arm, and I can pretty much put the ball where I want,” he recounts in his book.

Two weeks later, after he spent a quiet Sunday afternoon at the beach with his girlfriend Clara. When he got home, the catcher and center fielder for the Vaqueros were waiting for him.

“What are you doing here?” he asked.

“We’ve arranged a tryout for you.”

“A tryout? What are you talking about? With who?”

Mariano was incredulous. “But I’m not a pitcher!” he protested. “If you guys are joking, please stop it.”

This was no joke. After they watched Mariano save the game for their team, they contacted Chico Heron, a local coach and scout for the Yankees. He wanted to see Mariano pitch.

Trying out for the Yankees

When Mariano showed up for the tryout at Estadio Juan Demostenes Arosemena, an old ballpark with an ornate stucco façade, he wore old green pants, a frayed shirt, a shoe with a hole in it, and he had no glove.

Mariano threw nine pitches – all fastballs – because that was the only pitch he knew. Chico Heron like what he saw and later had him pitch for Herb Raybourn, the Yankee’s head scout in Latin America.

The day after he pitched for Raybourn, Mariano sat in his family home with him and signed a contract to play for the Yankees. It was about as improbable as a shepherd boy named David being told he would become the king of Israel.

Mariano began in the minor leagues, with the Gulf Coast Yankees. The other pitchers seemed big and imposing, but he quickly discovered he could compete with them. “As skinny as I am, and as underwhelming as my 86- or 87-mile per hour fastball is, I can do one thing better than just about anybody else: put the ball exactly where I want.”

As his success with his pitching mounted, he wondered, How on earth am I doing this?

“It has to be the work of the Lord,” he decided. “I am getting results that are way beyond my physical abilities. I don’t fully understand what is going on, but it feels much bigger than me.”

Still, he was the 26th-rated pitcher in the Gulf Coast League, did not make the All-Star team, and earned $155 a week.

In May, 1995, Mariano got the call every player dreams about – to move up from the minor leagues and pitch

for the New York Yankees. But after a terrible debut against the Angels in Anaheim, and three tough weeks in which he had an ERA of 10.20, he was sent back to the minors. He realized a second chance was not guaranteed.

As he warmed up for a game in Columbus, Ohio, his catcher, Jorge Posada, sat down next to him.

“What did you eat today?” Jorge asked.

“Because I’ve never seen you throw this hard. The ball is flying out of your hand.”

Later that night, the radar gun clocked his pitches at 96 to 98 miles per hour. It was a major jump in speed that stunned people in the Yankees organization.

Gene Michael, the Yankees’ general manager, got bulletins about how hard Mariano was throwing that evening. Michael wanted to know if the gun was working right. They checked with another scout who had a second radar gun operating at the same time. The surprising jump in speed was confirmed and Mariano was headed back to the big leagues.

There was no natural explanation, only a supernatural one. “It is a gift from the Lord,” Mariano recounts in his book. “I have known for a long time that He is using me for His own purposes, that he wants my pitching to help spread the good news about the Gospel of Jesus.” The increased speed stayed with him the rest of his career.

In Mariano’s first six weeks of the 1996 season he was in “the zone,” throwing 15-straight no-hit innings at one point, with an ERA of 0.83. Still, he was embarrassed by the fact that he only had one pitch – a four-seam fastball – despite his attempts to master other pitches.

A gift from heaven

During the 1997 season Mariano was playing catch with Ramiro Mendoza, a fellow pitcher and a Panamanian when something strange happened.

As Mariano threw the ball to Ramiro, he had to move his glove at the last moment to catch it, because the ball shifted dramatically to the right. “Stop playing around,” Ramiro said.

“What are you talking about? I’m not playing around,” he replied.

“I’m talking about the ball you just threw. It almost hit me.”

As Mariano continued throwing, every ball had the same extreme movement at the end. Perplexed, Mariano sought help from his coaches. He was not aware of doing anything different than before.

For two weeks, he could not get the ball to throw straight. “It’s as if the ball has a mind of its own, because it keeps moving late,” he recounts. As he continued to wrestle with it, he began to get command over it and throw strikes. Then he came to the realization that it would be foolish to change it.

“This is how my cut fastball was born,” he writes in the book. “It is as if it is dropped straight from the heavens. How can I explain it any other way than as one more incredible gift from the Lord?”

“I do not spend years searching for the pitch. I do not ask for it, or pray for it. All of a sudden it is there, a devastating baseball weapon.”

His new pitch – a gift from above – changed his whole career. By midseason, he had 27 saves and a 1.96 ERA and he was named to the All-Star team.

Mariano played 19 seasons for the Yankees, from 1995 to 2013. He was a 13-time All-Star and five-time World Series champion; he is major league baseball’s career leader in saves (652) and games finished (952). He finished in the top three in voting for the American League Cy Young Award four times.

After his retirement from baseball, Mariano and his wife, Clara, started an evangelical church called Refugio de Esperanza (Refuge of Hope) in New Rochelle, New York.

“Now I have a new job,” he writes, “probably better described as a calling – and that is to glorify the Lord and praise His name, and show the wonders that await those who seek Him and want to experience His grace and peace and mercy.”

“With the Lord, all things are possible.”