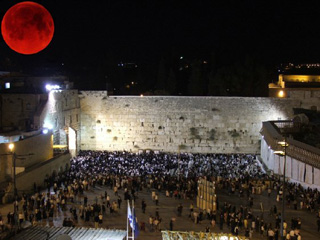 Hagee’s prediction “ignores” a common style of writing in the Bible known as “apocalyptic literature” that “frequently contains cosmic imagery” to describe significant spiritual events. In apocalyptic literature such figures of speech are not meant to be interpreted “in a literalistic manner,” Ben Merkle, associate professor of New Testament and Greek at Southeastern Baptist Theological Seminary in Wake Forest, N.C., told Baptist Press.

A rare sequence of four consecutive complete lunar eclipses — known as a tetrad — began April 15 and will conclude in September 2015. There were no tetrads between 1600 and 1900, though several will occur in the 21st century. A complete lunar eclipse is called a “blood moon” because the earth blocks direct sunlight from striking the moon, leaving the moon illuminated by refracted light which gives it a red hue.

Hagee, founder of Cornerstone Church in San Antonio, Texas, drew on biblical references about the moon turning to blood and said the tetrad signals an approaching event of major cosmic significance. This tetrad is especially significant, he said, because each eclipse will occur on a Jewish holy day: April 15, 2014 (Passover), Oct. 8, 2014 (Feast of Tabernacles), April 4, 2015 (Passover) and Sept. 28, 2015 (Feast of Tabernacles). Previous tetrads coincided with expulsion of the Jews from Spain in 1492, Israel’s statehood in 1948 and the Six Day War in 1967, Hagee said.

Hagee has a history of making controversial statements, as when he suggested Hurricane Katrina was an expression of God’s wrath toward New Orleans. He also holds to “dual covenant theology,” the belief that Jews can be saved by keeping the Old Testament “Law of Moses” unlike Gentiles, who must trust Jesus as Lord and Savior.

Hagee, 73, said he has been preparing for the tetrad for years and published a book titled “Blood Moons: Something Is About to Change.” An accompanying online television special aired April 15.

In a sermon posted on YouTube, Hagee quoted Joel 2, Acts 2 and Mark 13 — passages that speak of the moon being “darkened” or turned “to blood” — and claimed Christians would be foolish not to view the tetrad as a sign from God.

“The heavens are God’s billboard, and when something big is about to happen, He gives planet earth a sign in heaven,” Hagee said. “It’s a signal that something significant is about to happen. Pay attention. NASA has said this is coming. God has said through Joel and Saint Peter, ‘Listen! When this happens, it’s unusual.'”

But Merkle said such cosmic imagery commonly occurs as a figurative way of describing God’s action in human history.

Isaiah 13:10, for example, says the stars “will not give their light,” the sun “will be dark when it rises” and the moon “will not shine.” But context makes clear that the prophecy was fulfilled in the sixth century B.C., when the Babylonians took Judah into exile, Merkle said. It did not reference a literal darkening of the sun, moon or stars.

Merkle said a similar interpretation applies to Acts 2:20, a key passage in Hagee’s interpretation of the tetrad. In that verse, Peter quotes the Old Testament prophet Joel on the day of Pentecost — including Joel’s talk of God turning “the moon to blood” — to describe God’s giving of the Holy Spirit to the church.

“Peter (and Luke) had no difficulty in affirming that the prophecy given by Joel was fulfilled in the coming of the Spirit” at Pentecost, Merkle said. “Peter specifically states that the Spirit’s coming at Pentecost ‘is what was spoken by the prophet Joel’ (Acts 2:16 NASB).

“Peter could have omitted the references to the sun and moon by ending his quotation from Joel earlier. But he specifically includes them as what has been fulfilled. Peter knew that such cosmic language should not be interpreted literalistically. Rather, he knew that such language meant that God would sovereignly intervene in history and do something miraculous. He knew that this marked a key event in the history of redemption. It was a sign that they were living in the end times.”

Saying that Acts 2 encourages believers to be on alert anytime the moon literally takes on a red hue represents a misunderstanding of Scripture, Merkle said.

“Hagee has a history of putting forth teaching that is later retracted and his interpretation of the four blood moons may fall into that category,” he said.

Bruce Gordon, associate professor of the history and philosophy of science at Houston Baptist University, agreed. Apart from the star God placed over Jesus’ birthplace in Bethlehem, “the whole business of discerning ‘signs in the heavens’ related to human affairs smacks either of astrology or pointless speculation about eschatological prophecies in Scripture,” he said in written comments to BP.

“If you want a prediction about the future, I predict that Hagee’s claims will either meet the embarrassing fate of Harold Camping’s eschatological pronouncements or he’ll attempt to salvage them by claiming their association with some coincidental historical event that he can present as significant enough to save face. I think my prediction has a much greater chance of being correct than John Hagee’s,” said Gordon, who also is a senior fellow with the Discovery Institute, a Seattle-based think tank that focuses on science and public policy.

Christians “should not assign any theological significance to lunar eclipses (or other similarly predictable astronomical phenomena) beyond the general hand of divine providence that is evident in the natural regularities of our universe,” Gordon said.

Christians should remember though that Jesus will truly break into history at His second coming, an event with far greater cosmic significance than a lunar eclipse, Gordon said.

“Of course, Christ will return someday and creation will be made new,” he said. “The wise course of action is not to speculate about various ‘signs of the times,’ however, but rather to keep your spiritual house in order and give stronger emphasis to Jesus’ pronouncement that ‘about that day or hour no one knows, not even the angels in heaven, nor the Son, but only the Father’ (Matthew 24:36).” — Baptist Press