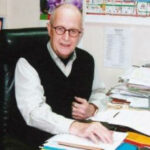 North Korea has arrested a Christian missionary from Australia, his family said on Wednesday, taking him into captivity even as it continues to face pressure to release an American missionary it has held for more than a year.

According to a story by Gerry Mullany for The New York Times, John Short, 75, was arrested in the capital, Pyongyang, on Sunday, according to his wife, Karen. She said the trip was her husband’s second to North Korea. He had Christian materials that had been translated into Korean, according to a statement by his family.

Short’s detention comes more than a year after North Korea arrested Kenneth Bae, an American missionary, after he entered the country from China.

Bae was sentenced to 15 years of hard labor for committing “hostile acts” against the North. Pyongyang has repeatedly resisted strong American pressure to release him.

In an interview with Reuters, Karen Short said her husband had been open with North Korean officials about his faith and even read his Bible in front of government guides during his first trip there. “He won’t be intimidated by the Communists,” she said.

Short has been repeatedly arrested in China after doing evangelical work there and “speaking out about brutality against Chinese Christians” in the country, according to a biography of him posted on a Christian website by Gospel Attract. His work in China began after the death of Mao Zedong in 1976, the biography said.

The New York Times reported that Short, a native of Barmera in southern Australia, came to Hong Kong in 1964, later focusing on missionary work with refugees from mainland China who had fled the Cultural Revolution. He raised three sons there with his wife, with whom he runs a Christian bookstore called the Christian Book Room.

In an interview with That’s Online, a website devoted to Chinese affairs, Karen Short said Australia’s Department of Foreign Affairs told her that her husband’s situation was “a different and difficult case.” Australia has limited diplomatic relations with North Korea.

“We’re Christians, and we’ve been here for 40 years,” The New York Times reported she said of Hong Kong. “He’s a front-line man – this is what he does. But North Korea is very different – that’s why his heart was to go there. I’m asking people to pray for him.”

North Korea was faulted this week in a sharply critical United Nations report for, among other things, its intolerance of religious freedom.

According to The New York Times, the UN report detailed the North’s practice of “extermination,” murder, enslavement, torture, rape and persecution on grounds of race, religion and gender.

Please pray for the release of John Short and Kenneth Bae, and for religious freedom and revival in North Korea. –ASSIST News