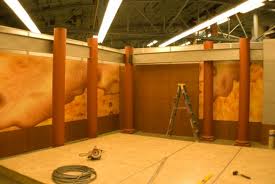 “It is up to the leaders of the native tribes to help our people recognize their gifts and callings and to prepare them to share the new direction for the entire nation,” says Dr. Negiel Bigpond, founder of Two Rivers Native American Training Center.

Bigpond is a fourth generation minister who has shared the gospel in 140 native reservations. Charisma magazine named him one of the ten most influential Christian leaders of 2006.

On the Two Rivers Training Center campus, about 15 miles south of Tulsa, Oklahoma, they recently completed a high-definition production studio.

A Christian spiritual element already pervades the atmosphere in the studio and will be central to their productions.  Television series are planned to bring greater hope, reconciliation, opportunity, cultural preservation and development of music and the arts.

Dr. Bigpond hopes their productions will bring restoration for so many who have been devastated through substance and alcohol abuse.

Programs that provide a historical context for the Native American’s journey are planned, along with what they see as a shift to a new, God-centered direction for the nation and its native peoples.

The studio will also be used to train TV production skills to young people, along with photography, radio broadcasting, web design, and Internet communication.

Dr. Bigpond wants his people to have a voice in the media. “Native Waves Network will share our struggles of the past as well as the opportunities on the horizon.”

There are 580 Native Nations in North America, according to Bigpond. The U.S. Center for World Missions states that there are at least 200 Native Nations that have not been reached with the Gospel and over 95% of the 3.5 million Native Americans in the United States have not accepted the gospel message.

His group still has needs for TV equipment, including cameras and switcher, tripods, monitors, audio board, recorders, and a computer for editing. Also needed are studio lights and control panel, the acoustical considerations, microphones, and wiring.

Bigpond would like to see upgraded internet connectivity in all the tribes through streaming video, podcasts, interactive media conferencing, and a 24/7 IPTV play out scheduler for the Native Waves Network.

He is currently looking for instructors of Christian television production, sound and editing.

Bigpond is frequently featured on “Light of the Southwest” on God’s Learning Channel in Midland, TX and hosts a Tulsa area Christian television program called “Tulsa — The Gathering Place”. Samples of television shows that have already been produced as well as songs and stories by elders can be viewed at:  http://nativewavesnetwork.com