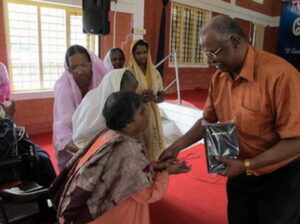 Vaishnavi, a 22-year-old Indian woman in Kerala State from a priestly Hindu family, suffered severe bleeding for three years. In 2013, her gynecologist recommended a full hysterectomy after an ultrasound showed several ovarian cysts. Because the family couldn’t afford the procedure and also wanted her to have children when she married, they declined the surgery.

Several weeks after their refusal, Vaishnavi met a Christian evangelist who handed her a Bible. Vaishnavi shared with the woman about her physical ailment.

She also told her she no longer had the money to buy medicine to relieve her pain.  “It is difficult to continue living without relief,” she lamented.

The woman evangelist told her about the power of Jesus to heal. She recounted the story in Matthew 9:20-22 when the woman with the issue of blood merely touched the hem of Jesus’ garment and was fully healed.

Visibly moved by the story, and struck by the power of the Gospel message, Vaishnavi repented of her sins and accepted Jesus as her personal Lord and Savior.

When she first began to attend church, she requested prayer for her affliction. As the church prayed, the Holy Spirit touched her in a powerful way and she was completely healed.

She now regularly attends the church affiliated with Paul Ciniraj Ministries and professes her astounding healing from her own “issue of blood.”

In many parts of the world, Jesus’ healing touch closely resembles the stories from the New Testament. His miracle-working power converts souls as they encounter His presence.

“Jesus is the same yesterday today and forever.”