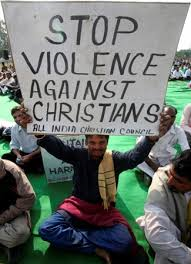 The worst violence against Christians in the 21st century took place in India’s Orissa state at the hands of Hindu nationalists, according to testimony yesterday by leading journalist John L. Allen, Jr. In the attack, “as many as 500 Christians were killed, many hacked to death by machete-wielding Hindu radicals; and thousands more were  injured, and at least 50,000 left homeless,” Allen told the House Subcommittee on Africa, Global Health, Global Human Rights and International Organizations.

Attendees at the hearing pressed President Obama to fill the post of ambassador-at-large for religious freedom. Obama left the post vacant until midway through his second year in office, nominating Susan Johnson Cook in June 2009. She wasn’t confirmed until April 2011, then resigned in October of last year—meaning the post has been filled only about half of Obama’s time in office.

Meanwhile, the U.S. will end its boycott of Hindu nationalist Narendra Modi, a BJP candidate for Prime Minister in an upcoming election, with U.S. ambassador Nancy Powell scheduled to meet with him this week. The U.S. has denied Modi a visa since 2005 for failing to stop religious riots that killed 1,000 in Gujarat where he was the top elected official.

Please pray for the salvation of Hindus in India, for the safety of Christians, and for peace and God’s presence in that country. –World Magazine