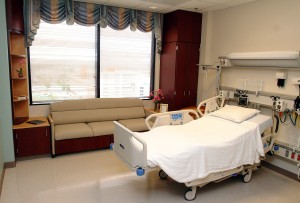 When Therese Daoud arrived at Tel Aviv’s Ichilov Hospital with a huge cancerous tumor, doctors said her only chance of survival would be to amputate the leg.

According to a story by David Lazarus of Israel Today, what happened during the following months left the medical staff and the nation “speechless.”

“If someone had told me the story of what happened to Therese, I would have said they are crazy and sent them to a mental hospital,” Professor Yaakov Bickels, head of the Orthopedic-Oncology Department at the hospital, told Israel’s Channel 2 . “But I was there. I saw it with my own eyes.”

What the professor saw was described as a malignant tumor “the size of an orange.” The biopsy showed a sarcoma.

“This is one of the most aggressive and terrifying of all cancerous tumors,” Bickels explained. “With a tumor developed to this degree, the only treatment we could offer Therese was to amputate her leg.”

“I was in shock when the doctors told me,” said Daoud, a junior high school science teacher. “I thought he was talking about someone else. But I had no choice. I began to prepare myself for life with one leg.”

Israel Today said Daoud sent lab tests and x-rays to  he USA to double check, but they came back with the same prognosis. The leg must be amputated to save her life.

This time the surgical units were unavailable due to a number of emergency cases. By the time Daoud got another date for surgery, her mother had become very sick, and Daoud decided to herself postpone the operation in order to take care of her mother.

For most of us, Israel Today reported, postponing a life saving surgery would have been overwhelming. Not for Daoud. “Three times the surgery was delayed,” she said. “This was a clear sign to me from heaven that I should not have the surgery.” Israeli TV showed images of Daoud praying in a church in the north of the country.

“When she told me that she had decided not to have the leg amputated, it was clear to me. She would soon die,” Bickels said. “I was sorry about her decision.”

Three months later, a huge smile on her face, Daoud walked unaided into Bickels’ office. “What happened to you?” he asked. “I prayed,” she responded.

Stunned, Bickels immediately sent Daoud for an MRI, but the results were undeniable. The killer growth had receded dramatically. “This just does not happen,” the professor said. “A growth of this kind cannot recede like this.”

Israel Today said doctors and nurses could not believe the results, so they sent for another biopsy. But to no avail. There was no cancer. It had completely left her body. “We kept checking her records over and over,” said an astonished Bickels. “We just could not accept that the cancer had gone without any treatment.”

Israeli news stations have been reporting on the miracle and all admit that it is impossible to explain what happened to Daoud, other than the power of faith.

Israel Today said hospital staff and reporters even traveled to Daoud’s home to look for some other explanation. “They tasted the food she eats and checked the water she drinks, but there was no physical explanation. They left contemplating one undeniable, unavoidable and very uncomfortable option – that prayer in Yeshua, the Messiah of Israel, still heals today.” –ASSIST News