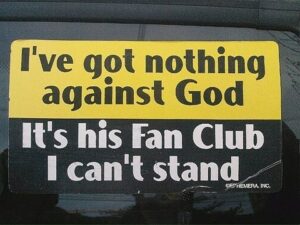 Christians don’t exactly have the best reputation outside of the Church. The news portrays people of faith picketing funerals, campaigning against science and extremely out dated with today’s world. People, like me, who didn’t grow up in church services, believed the negative reports we were told. When I gave my life to Christ, I saw the true beauty of Christ, and realized many of my assumptions about Christians were not accurate. This list highlights a few assumptions people have about Christians. My prayer is that understanding what people think about us will help us to love even more by disproving or combatting those false assumptions.

It’s not fun to party with someone who refuses to drink, smoke and play the game. What we call holiness, non-believers call lameness. Not watching certain movies, listening to music or going to certain venues where people naturally gather (clubs, bars, etc.) gives Christians the “boring” label. This is what I remember thinking about Christians before I converted.

People don’t like being told their lifestyle is wrong. The un-churched did not grow up hearing that drinking, immodest dressing, and promiscuity were all that bad. In fact, these subjects were often celebrated. Hearing Christians say all these things are wrong and worthy of Hell comes off as judgmental. It feels like people are pushing unnecessary rules.

Sometimes the only news I heard about Christianity was the latest scandal. A preacher is caught in an affair or stealing money, and people start talking about the hypocrisy of Christians. We are held to a high standard by the world, and as soon as our words and actions don’t line up, it’s easy to say all Christians are fake. One mistake is all it takes for Christians to be considered hypocrites.

Unless a Christian is very focused on Evangelism, he or she typically doesn’t have many non-Christian friends. We are told in sermons, don’t be friends with the world. This makes it very difficult for non-Christians to make friends with people in the Church. People of faith get used to spending time with other believers. While this looks like great fellowship to Christians, it seems exclusive and cliquey to outsiders.

Normal people don’t understand statements like, “I have been sanctified and transformed under the blood of the lamb.” In fact, it sounds a little creepy. When people talk like this and use other Christian colloquialisms, it feels like hearing another language. Christians have different words, traditions, music, movies and inside jokes, making it very difficult to connect.

Scripture asks us in 2 Corinthians 6:14, “What fellowship does light have with darkness?” Christians are often disliked for simply being light. At times when we are loving, kind, relatable, and do everything right, non-Christians will simply not like us because we carry the Spirit of God.

Use this list as a tool to understand what people may think about you. One of the best strategies I’ve seen for Evangelism is proving people’s negative assumptions about Christians wrong through my lifestyle. If we show people Christians are better than what they have heard, they might start wondering if God is better than they had previously heard. And, of course, He is.