Enormously gifted as a worship leader, yet living a secret life of addiction, Matt Tommey now uses his art as a way to connect with God and lead others into personal and creative wholeness.

“I grew up in the church under a Steinway piano,” says Matt Tommey, worship pastor, artist, author, and founder of The Worship Studio. At 13, living in Columbus, Georgia, he gave his heart to the Lord and answered a very early call into worship ministry.

As a young teenager, several traumatic events – his grandfather’s death, sexual abuse by a same-sex family member, and a deteriorating relationship with his father created a perfect storm of brokenness.  Matt struggled for many years to overcome his inner distress, but succumbed to addiction and other unhealthy relational patterns.

He was driven into living a double life of fear and shame, performance and perfection, which only served to drive the pain deeper.

As his secret life continued, he felt more and more conflicted. But God intervened through a special friendship he developed with Jim and Pat Banks, who led House of Healing Ministries. “They were the first safe people in my life,” Matt says. “I shared my story with them from beginning to end. They didn’t reject me and began to really walk with me on a journey toward wholeness.”

Part of that journey to wholeness for Matt was honestly sharing his struggles with his wife. At this pivotal moment in their marriage Matt’s wife chose forgiveness and grace, an unexpected gift that flowed down from the Father above.

“That was the major turning point in my life, seeing someone put to death the lie I had believed, that if you really knew who I was you would reject me.”

As part of the healing process, he attended “Walking Free,” one of the largest sexual recovery groups in the U.S. “I learned God loves me in spite of my brokenness. I learned I wasn’t alone, I wasn’t crazy, and that I was going to make it.”

“Even though I’m walking in freedom today, I’m still on a continual road toward wholeness,” he acknowledges. That journey toward wholeness includes forgiving his abuser from childhood and reconciling with his father.

A big part of Matt’s journey toward personal and creative wholeness has been his love for basketry. He enjoyed time in the woods, making things with his hands, and he began to explore basketry using natural materials as a student at the University of Georgia.

Now almost 20 years later, Matt is an award-winning contemporary basketry artist focusing on the use of bark, vines and recycled metals in his work. “My connection with basketry has always been in the harvesting.” Matt harvests his own materials from the woods near his home in Asheville, North Carolina.

“Connecting with God by being in nature and enjoying the beauty of His creation has been and continues to be very healing for me. Instead of feeling affirmed by performing for God, I feel affirmed by being with Him in the solace of the natural environment.”

Matt continues to lead worship and currently serves as Pastor of Worship Arts at King of Glory Church in Asheville, North Carolina.

He is also author of the book “Unlocking the Heart of the Artist,” where he shares about his healing journey and how to prosper as a creative person in the Kingdom of God.

“Creative people can’t be who God wants them to be unless they allow God to heal the broken places in their hearts,” he says. “If your 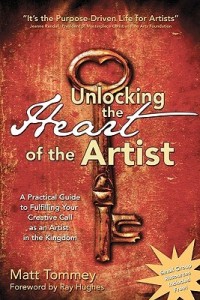 life is a shambles internally, it’s difficult to find satisfaction in the creative expression God gives you to glorify Him.”

Matt says his story is far from unique. “There are many creative people living lives of quiet desperation because of the lies of the enemy.”

Out of his own journey of brokenness and restoration, he formed The Worship Studio, an organization helping artists form creative communities dedicated to personal wholeness, engaging the Holy Spirit in the artistic process, and honing their skills for God’s glory.

This September The Worship Studio hosts its annual conference called “Gathering Artisans” where artists from a myriad of different creative genres converge for hands-on workshops and opportunities for fellowship and worship. Workshops include music, fine art, prophetic art, fine craft, media, performing arts and much more.

“We help creative people overcome roadblocks and really thrive as artists in the Kingdom,” he says.