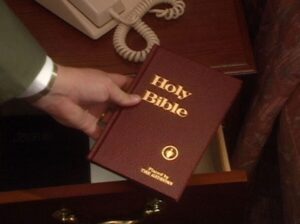 Best-selling novel “Fifty Shades of Grey” by British author E.L. James may be outpacing the Bible in popularity, as one British hotel manager has decided to chuck Gideon bibles traditionally stocked in guest rooms for copies of the racy novel.

Wayne Bartholomew, General Manager of Damson Dene Hotel in Cumbria, Northwest England, says he got the idea to swap out copies of the holy book for the otherwise unholy one after a discussion with fans on Facebook.

“Fifty Shades of Grey is all that people are talking about at the moment, but I know that some are too shy to buy it for themselves. I thought it would be a special treat for our guests to find it in their bedside cabinet and that includes the men. They are as desperate to get their hands on a copy as are the women,” Bartholomew, reportedly a choir member at his local church, told the News & Star publication.

The Daily Mail claimed in a report that there was “outrage” over Bartholomew’s decision in relegating copies of the Bible to the front desk, but did not provide any specific comments to that effect.

However, some of the more than 3,200 followers on the Damson Dene Hotel’s official Facebook page expressed disagreement with the change.

Another commenter saw no problem with keeping copies of both the Gideon Bible and “Fifty Shades of Grey” in hotel rooms.

“I think that the Bible is a much better read than 50 Shades. I would happily read the Bible over and over again but find 50 Shades a struggle. Why don’t you have both and a car manual too so everyone is happy,” suggested Sian Hunter.

Bartholomew has acknowledged the popularity of the Bible, said to be the top best-selling book of all time, and insisted that the Holy Writ does share some similarities with its new replacement.

“The Gideon Bible is also full of references to sex and violence although it’s written using more formal language so [King] James’ book is easier to read,” he said.

Bartholomew’s apparent marketing ploy has been so well received that he is now offering guests who book a room by a certain time complimentary copies of “Fifty Shades of Grey.” The general manager, who said the book-swap will occur this weekend in select rooms, is also popular for his starring role on Channel 4’s “The Hotel” documentary.

The series has been criticized by some for its violence and glorification of sex. Several Christian female bloggers have warned against picking up the “Fifty Shades” books, saying reading them borders on adultery and can lead to unhealthy attitudes toward women. — Nicola Menzie, Christian Post