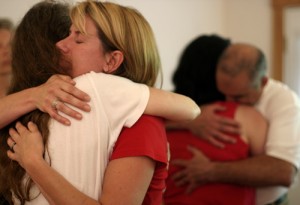 In one of the earliest teachings Jesus gave to the church, he taught about a process to find healing and reconciliation when a brother or sister sins against you.

In the Book of Matthew, chapter 18, Jesus said:

”If your brother sins against you, go and show him his fault, just between the two of you. If he listens to you, you have won your brother over.

Here Jesus gave some instructions about how to deal with a fellow believer who sins against us. Jesus did not say if your brother irritates or offends you in a minor way, that you confront them in this manner.

Pastor Ray Stedman noted that there is another word in the Christian life that covers irritations coming from difficult people: that word is forbearance. We are called to bear with one another. We put up with difficult people, the grace-growers around us, often without saying anything. Sometimes they drive us to our knees – if not almost crazy.

One of our former senior pastors, Steve Krantz, warned in a sermon about “triangle-ing.” Triangle-ing is when you go to somebody else first, instead of directly to the person who sinned against you.

This is our human tendency, to go to somebody else and say, “Whoa, do you know what so and so did to me?” Then we unload the dump truck in their lap. Then it gets passes around.

Triangle-ing can quickly turn into gossip, which leads to dysfunctional families and dysfunctional churches. If we start telling other people, that in itself is a sin.

None of us likes confronting someone else about a sin matter. Your attitude when you go is all-important. You should go in a spirit of gentleness, speaking the truth in love, with compassion, sympathy and mercy.

You should not be self-righteous, harsh, or condemning. If the person listens and accepts what you’ve said and stops their sin, there is nothing more you need to do. You’ve won your brother or sister.

If the person won’t listen and rejects what you’ve said, then you take one or two others with you. Our model for this process is God Himself. He goes after his sinning children to bring them back. And he uses the church as a means to do that.

If the person still refuses to listen, tell it to the church. In my experience this is extremely rare that it would get to this level, and usually this is reserved for a church leader who has had a significant moral failure.

But these are the instructions of Jesus himself. At the last stage of this process, if the person refuses to listen to the church, Jesus says to treat them like a pagan or a tax collector.

In our church, we would probably treat a pagan or tax collector pretty well. But in that day they were not treated well; they were treated like outcasts. So I believe Jesus wants  the church to protect its holiness and keep the sin from spreading. To accomplish that, the person was removed from fellowship.

Again, this would be extremely rare today in any church. But even if we give up dealing with a person caught up in habitual sin, even if our human efforts fail, God can take over the process, and that is what usually happens.

God has his ways of getting the person’s attention, and that can be very painful for that individual.

I went through a Matthew 18 process many years ago as an elder who had to confront a pastor that I loved and admired. I put this man on a pedestal, which I should not have done. When he had a moral failure, it almost destroyed my young faith. It was one of the most painful times of my life.

This man finally broke down and admitted what he had down, with great emotion, in front of a group of elders meeting in his home. After that, he went around the room and asked each of us to forgive him.

And that was really difficult for me to do. In fact, I couldn’t do it at that moment. I was too deeply hurt, my wounds were too raw. But I came to realize much later the importance of forgiveness, that it often involves a decision rather than a feeling.

If I waited until I felt like forgiving him that would have been a long, long time.

Just as loving your spouse if a decision, not necessarily a feeling (our feelings go up and down) forgiveness involves a very important decision at a time when we may not have any inclination within ourselves to forgive.

There are times when I really don’t want to forgive someone else. But Jesus’ parable at the end of chapter 18 has become very important to me in understanding why I should forgive. In this parable, Jesus responded to a question that came from Peter.

Peter came to Jesus and asked, “Lord, how many times shall I forgive my brother when he sins against me? Up to seven times?”

Jesus answered,”I tell you, not seven times, but seventy-seven times. ”Therefore, the kingdom of heaven is like a king who wanted to settle accounts with his servants. As he began the settlement, a man who owed him ten thousand talents (equivalent to more than $10 million) was brought to him.

Since he was not able to pay, the master ordered that he and his wife and his children and all that he had be sold to repay the debt.

”The servant fell on his knees before him. ‘Be patient with me,’ he begged, ‘and I will pay back everything.’ The servant’s master took pity on him, canceled the debt and let him go.

”But when that servant went out, he found one of his fellow servants who owed him a hundred denarii (equivalent to about $20). He grabbed him and began to choke him. ‘Pay back what you owe me!’ he demanded.”

His fellow servant fell to his knees and begged him, ‘Be patient with me, and I will pay you back.’

”But he refused. Instead, he went off and had the man thrown into prison until he could pay the debt. When the other servants saw what had happened, they were greatly distressed and went and told their master everything that had happened.

Then the master called the servant in. ‘You wicked servant,’ he said, ‘I canceled all that debt of yours because you begged me to. Shouldn’t you have had mercy on your fellow servant just as I had on you?’ In anger, his master turned him over to the jailers to be tortured, until he should pay back all he owed.

”This is how my heavenly Father will treat each of you unless you forgive your brother from your heart.”

In this parable, Jesus holds up a mirror so we can see ourselves. The great king represents God, who has forgiven us all our sins, an enormous debt. The amount he forgave was way beyond our capacity to repay.

At a staggering cost to himself, the king forgave this huge debt. What was the huge cost to God? The death of his only begotten son, Jesus, to pay for your sins.

But this man, who should have been grateful because he was forgiven so much, refuses to forgive someone who owes him the equivalent of about $20 dollars.

The rabbis had a rule at the time of Jesus that you should only forgive someone three times for the same offense. Peter thought he was being generous when he asked if we should forgive someone seven times.

But Jesus says, no, don’t forgive seven times, forgive seven times seventy times. His point to Peter is that we shouldn’t even bother to count. He said there should be no limit on the times we forgive our brother or sister in Christ.

In human terms, this seems completely unfair. I might say I try to forgive someone, but often I don’t forget and it feels awkward around that person. I say that I bury the hatchet, but I leave the handle showing so I can grab it whenever I need it.

Do I really have to forgive?  It goes against everything I’m feeling. I want justice! Justice! I want them to pay.

It seems unreasonable until I think about how many times God has forgiven me. How many times have I gone to God and confessed the same darn sin? I can’t count that high. What if God said there was a limit of three times or even 7 times to forgive me for that? What if God had a three strikes rule?

There is no limit on how many times you can come before God and ask for forgiveness. Aren’t you thankful for that? He never counts the times we come before his throne of grace. He freely forgives us and washes us clean.

God not only forgives our sins, he forgets our sins. The Scripture says that as far as the east is from the west, that is how far God has removed our transgressions from us.

Why should I forgive those who hurt me? First, God has forgiven me so much. He cancelled all my debts; he wiped the slate clean. If he has forgiven $10 million of my debt, how can I withhold the forgiveness of $20 in debt from somebody else?

Why should I forgive those who hurt me? If you notice the end of the parable, the unmerciful servant is thrown into prison, to be tortured by his jailers. Unforgiveness is like a torturous prison.

By not forgiving that person, you end up hurting yourself even more, as the resentment and bitterness eat away at your heart. You can even make yourself sick due to this self-torture.

Why should I forgive? Because I need forgiveness every day myself.

When I forgive that person who wounded me, I don’t let them off the hook. I simply take them off my hook, and place them on God’s hook. I relinquish my right to get even and give all those rights over to God. He has a better arsenal than I do.

There is a day coming when God will settle the score completely on all sin and injustice in the world.

But there won’t be healing in the world until there is healing in our hearts. It begins right here. Because of the grace God has shown each one of us, we can begin to extend grace to each other.

Because of the grace God has shown you and me, you can be an instrument in his process of healing, one heart at a time.

The Power of God’s mission-minded ‘super-connectors’