Yongala and her husband Junkichi couldn’t believe their eyes. Their 145-year-old family business was swept away in a moment by the March 11 tsunami that struck Ishinomaki, Japan — hard on the heels of a massive earthquake.

A thick layer of gooey black mud covers the floor of their kimono shop. All their inventory and equipment were destroyed. The street outside is piled high with flood debris. With no idea even where to start, discouragement weighed down their hearts. 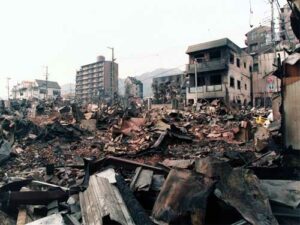 “Imagine the joy this couple felt when a team of American and Japanese Christians walked up and offered to help them clean up the mess,” said Ben Wolf, who with his wife Pam directs work in the Asia Rim for Baptist Global Response, an international relief and development organization. “It’s hard enough to comprehend the devastation the earthquake and tsunami caused. You would have to be there to understand. But for complete strangers to offer to help, that makes a God-sized impact on someone’s heart.”

The joint U.S.-Japan Baptist relief effort will make that same kind of God-sized impact on thousands of families who almost a month later are still reeling from the trauma of earthquake, tsunami and nuclear disaster, Wolf said. Two new teams of Southern Baptist disaster relief specialists have arrived in Japan to work with Japan Baptist partners and Southern Baptist overseas workers stationed in Japan.

A team from South Carolina is in Japan conducting training sessions in trauma and grief counseling, and a two-member team from California has arrived to add expertise in administering a disaster response, Wolf said. Two earlier teams had trained Japanese Baptists on mass feeding operations, which allowed Tokyo Baptist Church to gear up a kitchen that can provide 3,000 hot meals at a time.

The earlier teams also paired up with Japanese Baptist volunteers to conduct two distributions of emergency supplies in the disaster zone. They were able to deliver clothing, heating kerosene, sleeping mats, paper products and food, as well as help muck out mud from homes and businesses.

A total of 27,601 people are dead or missing since the disaster struck, according to the United Nations, and while the number of people in shelters is down to 173,000, thousands of people are living in their cars or damaged homes. Without electricity or water, conditions even in the shelters have been brutal as nighttime temperatures dip into the 30s.

Because gasoline is in short supply and the disaster zone’s infrastructure is so badly damaged, the Japanese government has instructed humanitarian groups to wait to begin relief efforts, said Jeff Palmer, executive director of Baptist Global Response.

“The government has been very clear that relief efforts that are conducted must be completely self-sustaining and must be done with a local Japanese partner,” Palmer said. “That matches exactly how Southern Baptists do disaster relief. We simply will not ride in on a white horse, do our own thing, then ride back out when we’re ready. In Japan, as everywhere else we do relief work, we are working closely with local partners — in this case, Tokyo Baptist Church and the Japan Baptist Convention.”

The partners in the joint relief effort — which also include members of the Southern Baptist Disaster Relief Network and International Mission Board personnel assigned to Japan — have worked well together, Palmer said.

“I deeply, deeply appreciate the spirit of cooperation and teamwork we have seen among our people on the ground in Japan and those in the U.S. who are helping organize the effort,” Palmer said. “We have seen almost $418,000 donated toward the relief effort, of which $150,000 has already been allocated for the initial response.

“It is deeply gratifying to see God’s people reach out to Japan’s people in their hour of desperate need and demonstrate the power of God’s love,” Palmer said. “That makes an eternal impression on someone who is feeling alone and forgotten in their trouble.” –Mark Kelly, assistant editor and senior writer for Baptist Press.