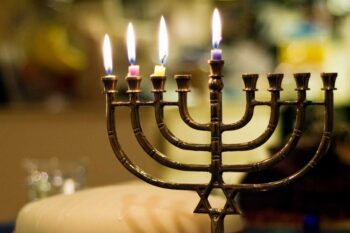 As we approach Hanukkah, it’s a timely reminder that the conditions leading to its inception are very much with us today.
For godlessness and unbelief abounded as the Syrian-Greek tyrant Antiochus Epiphanes IV unleashed his fury on the Jewish people of the second century BC.
They stood in the way of his plans to enforce conformity with Hellenistic (Greek) culture upon all the people of his empire.

So he mercilessly slaughtered 80,000 Jewish men, women and children and ended up blasphemously sacrificing a pig on the altar of the Temple, the holiest place in Judaism.
As my friend Sam Gordon put it in his book Great God of Heaven (CYP), “he pulled out all the stops to extinguish the faith of the people of God”. Quoting commentator Dale Ralph Davis, the dictator “stripped [the Jewish people] of sacrament, sacrifice, Sabbath and Scripture. In his reign of terror, it seemed the only choice was to be a live pagan or a dead Israelite!”

Sure enough, many compromised their covenant relationship with the God of Israel by accepting the worldly Greek culture being imposed upon them.

But the Maccabees – a small band of god-fearing zealots – rose up in revolt as they stood against the tyrant, ultimately defeating a much greater force, a scenario that was to be repeated many times in Israel’s history.

The Temple was finally cleansed, godliness was restored to Israel and the menorah burned miraculously for eight days despite having only enough oil for a day. This is what the festival is all about and why the Hanukkah menorah has nine candles rather than the traditional seven, with the ‘servant’ candle (at the centre) used to light the other eight, one for each day of the feast, starting this year on December 18th.

And it reminds us how Jesus, the Servant King and ‘light of the world’, also lights up the lives of his followers.

The reign of terror that led to Hanukkah was prophesied four centuries earlier by Daniel. Jesus also referred to it (Matthew 24:15), indicating that it’s a picture of much worse to come at the end of the age – a precursor, in fact, to the rise of the end-time Antichrist who would wreak devastating havoc on God’s people.

It would seem we are on the verge of the great tribulation to which our Lord referred. Vicious antisemitism has once more raised its ugly head and, as in the days of the Maccabees, many Jews have turned their backs on God, seduced by the woke culture of the Western nations into atheism, hedonism, immorality and idol worship as they fellow New Age cults and pagan mystics.

Meanwhile all hell has broken loose as demonic Cultural Marxism demands that we all conform to the group-speak of the Left-leaning world of LGBT and other undignified dogma.
The spirit of the age has infiltrated almost every institution including the Church which, in the West at least, has become stale and dry after being infused with the rancid yeast of those who wish to crush the life out of her.

With Christians thus unwilling to fulfil their calling as the salt of the earth, it’s no surprise that we in the UK are witnessing rebellion on all fronts – virtually everyone is on strike here as I write.

Efforts to rid Western culture of the Christianity on which it was founded are threatening to engulf us all like a tsunami as tidal waves of wrath from the devil’s domain try to sweep us into a godless future that doesn’t bear thinking about. It’s the spirit of the Maccabees we need, not the spirit of the age.

The re-dedication of the Temple paved the way for the coming of Messiah, who himself celebrated Hanukkah, as we read in John’s Gospel (see chapter 10, verse 22).

I wonder if we’re about to experience a refining reign of terror which has the effect of sorting out the sheep from the goats in terms of who is for God and who is not?

As for faith in Jesus, everything hinges on the resurrection – of our Lord, and of his Land. So we trust in Jesus, the Jew, just as the nation of Israel is already living in part-fulfilment of ‘life from the dead’ through re-birth out of the ashes of the Holocaust.

The UN has bizarrely pronounced Israel as a ‘catastrophe’, having played a part (in 1947) in her creation. And yet, after less than 75 years, she has become a leading player on the world stage.

But the double resurrection, prophesied by Ezekiel, of a return to their Land and their Lord, awaits fulfilment.

It’s time for a re-dedication of the Hanukkah spirit, and for repairing the altar of Elijah in defiance of the false prophets. I believe it’s significant that, just as Passover this year precisely coincided with Easter, Hanukkah too will overlap the Christmas season when Christians celebrate the ‘light of the world’ (John 8:12) coming to live among us. Is God trying to tell us something?

At the Feast of Dedication Jesus attended, he said: “My sheep hear my voice, and I know them, and they follow me.” (John 10:27) Happy Hanukkah and a merry Christmas!

With thanks to Nick Thompson for his inspiring insights given at a talk last week.