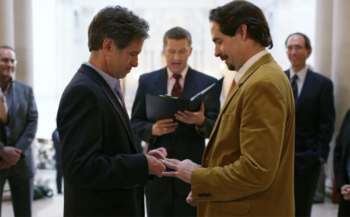 Seven years ago, five activists in black robes made a horrible mistake. In the 2015 Obergefell decision, the liberal wing of the Supreme Court abandoned precedent, manipulated the Constitution, usurped Congress’s legislative authority, and attempted to override the states and redefine marriage.

I’m still disappointed that the men and women who should have been our nation’s foremost legal scholars chose to abandon all sound reason and all judicial restraint. They pretended the Constitution allowed them to act as legislators and override state laws on a topic the Constitution says nothing about. Marriage is not defined in the Constitution, which means, according to the 10th Amendment, it should be left to the states to decide — as Georgia did in 2004 when voters overwhelmingly added to the state constitution an amendment preserving marriage between a man and a woman.

In forcing this fraud upon the country, the Court ignored not only the Constitution, but also the history of marriage. The institution of marriage has formed the bedrock of society since long before our Founders “assume[d] among the powers of the earth the separate and equal station to which the laws of nature and of nature’s God entitle[d] them.” Most disappointing, the justices also defied the laws of nature’s God, which, according to the traditional understanding of every faith, endorse the holy union of husband and wife as long as they both shall live.

Now, Democrats in Congress are moving to reinforce the Supreme Court’s grave error with legislation. Not only does the atrociously named “Respect for Marriage Act” discount the faith of millions of Americans, it also erodes their religious liberty by elevating the “right” to same-sex marriage above the constitutionally-guaranteed right for people to live according to their faith.

The last thing we should be doing is redefining it in opposition to all common sense and decency. Marriage is rightly the union of one man and one woman, and that wouldn’t change even if a bill saying otherwise passed through Congress unanimously. According to my faith, and the faiths of countless other Americans, marriage is a holy institution ordained by God. God defines what marriage is.

The Democrats’ partisan plan to codify the disastrous Obergefell decision hasn’t succeeded quite yet. I’m saddened that so many Republicans abandoned pro-family values to support the legislation in the House, but there’s still a good chance of stopping it in the Senate. The vote will come down to the wire, and every senator’s decision will matter. In this political crisis, it’s the duty of every constituent to call up their senators and urge them to reject the so-called “Respect for Marriage Act.”

This moment is also a spiritual crisis. Spiritual problems cannot be solved with legislation. Now is the time for the body of Christ to step up to the plate. We need pastors to address this issue boldly and clearly. We need believers to speak out. Jesus Christ told us that we were salt and light, but it’s impossible to be salt and light without being engaged. Most importantly, we’ve got to be on our knees in prayer, calling for God to act, to pull our country back from self-destruction.

For seven years, we have watched the fallout from Obergefell: Religious freedom is under assault and gender ideologues are pushing sexual confusion onto kindergarteners. Let’s not make things worse by reaffirming the Court’s abuse of power. Let’s learn from it and correct it. Let’s uphold the truth that marriage is the union of one man and one woman.