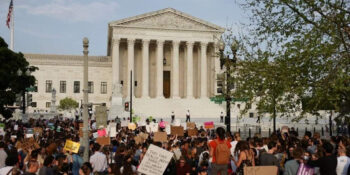 In a huge win for religious freedom, the Supreme Court ruled 6-3 in favor of a Washington state high school football coach who was fired from his position after praying with his players on the field after games.

The school district said Coach Joe Kennedy’s prayers violated the First Amendment Establishment Clause of the Constitution, which led to a protracted legal battle that began in 2015.

The majority opinion written by Justice Neil Gorsuch stated that teachers and students alike still maintain their freedom of speech, even if they’re working at a state-funded school. “When it comes to Mr. Kennedy’s free speech claim, our precedents remind us that the First Amendment’s protections extend to ‘teachers and students,’ neither of whom ‘shed their constitutional rights to freedom of speech or expression at the schoolhouse gate,'” the opinion stated.

Justice Gorsuch wrote, “The Constitution and the best of our traditions counsel mutual respect and tolerance, not censorship and suppression, for religious and nonreligious views alike.”

“Here, a government entity sought to punish an individual for engaging in a brief, quiet, personal religious observance doubly protected by the Free Exercise and Free Speech Clauses of the First Amendment. And the only meaningful justification the government offered for its reprisal rested on a mistaken view that it had a duty to ferret out and suppress religious observances even as it allows comparable secular speech. The Constitution neither mandates nor tolerates that kind of discrimination.”

Law Professor Jonathan Turley, speaking on Fox News, said the decision eviscerates the so-called Lemon Test: “This effectively puts the final nail in the coffin of Lemon, a test that would determine when you would have violations under these clauses. The court said there is a better approach and there is no such thing as a modified heckler’s veto, that just because some people might be offended by speech like this, it can be proscribed by the state. The court said what the coach did in this case was clearly private speech, not subject to this type of regulation.”

With the removal of Lemon, the key standard going forward is whether the prayer is determined to be private speech as opposed to government speech. “The court said it was clear to them this was a private expression of faith and the district had no right to fire or discipline him for it,” Turley told Fox.

“It said you can’t allow these violations to turn on this modified heckler’s veto, where one or a few people object to what they are witnessing or feel they are in fact coerced.

“The court says you still have the right of government agencies and obviously private employers to control speech being done as an employee, but the court said this isn’t in that category. It was clear to everyone this was a private prayer done by a coach with other players expressing a matter of faith.”

The complete ruling may be found here