Reflections on the Russian Invasion of Ukraine — By F. Douglas Pennoyer, Retired Dean 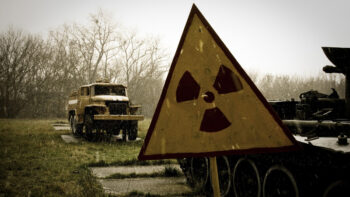 of Biola University’s Cook School of Intercultural Studies, and FEBC USA Board Emeritus —

I’ve felt the warm hug of a Ukrainian great grandmother who lost a young husband in WWII and looked deeply into the grieving eyes of a grandmother and mother pained by the lingering human carnage of the 1986 Chernobyl nuclear accident. Several trips to the Ukraine brought profound worship experiences in Pentecostal, Baptist, and monastery churches, and a visit with a faithful village pastor and his family filled my heart with joy.

Memories of happy Ukrainian servers at a long dinner table after that rare Chernobyl visit are rapidly fading as the sounds and sights of war invade my living room. Tanks now roll along the highways and byways we traveled. For a 1947 boomer it brings back horrific Russian tank scenes from the streets of Hungary (Nov. ’56) and Czechoslovakia (Aug. ’68).

Yes, I understand history and as a WWII buff I’ve visited the Kyiv war museum with the 200 ft metal statute overlooking the Dnipro River. It celebrates the victory over an authoritarian invader. The swastika yielded to the hammer and sickle but freedom suffered another blow until the collapse of the USSR and Ukrainian independence in December 1991. Thirty years of social and political revolutions tried to stabilize the Ukrainian democracy but each time powerful internal and external forces fought to subjugate the will of the people. Now another authoritarian invades and by brute strength seeks to overturn a government recognized by the world’s nations. The hammer and sickle are no longer on the Russian flag but to pound and cut peoples into submission is a tradition Putin follows from Stalin who created the Ukrainian famine of the 1930’s and left nearly 4 million dead.

My missionary parents taught me to do good and abhor evil. They lovingly demonstrated in a multi-ethnic Philippine village that in God’s eyes black, brown, and white skin or straight, wavy and kinky hair make no difference. The Gospel should be proclaimed and taught but the rights of the less powerful must be treasured, not trampled into the dust by those with bigger houses and more possessions. My mother expressed disgust when our villagers were swindled by banana buyers.

My father worked tirelessly to get a man deeply wounded by an arrow out of the mountains to a coastal hospital. He stayed there to make sure the man received the best care possible. He wept over the death, and when they were going to simply dispose of the naked body, my father took off his sweater, gave up his blanket, and paid for a proper burial.

No wonder I spent two weeks in March waking up each night, praying, unable to sleep, my restless mind swirling with Ukrainian memories mixed with the horrible reality of an unjust war.

Finally the anger seething under the surface began emerging in word pictures and phrases, anchored by a central thought—“There is no bravery in the slavery of free peoples.” Rise up O Ghosts of Chernobyl is a metaphorical curse, a statement of utter disgust against a man and his leadership who by brute, evil force have little regard for human life and seek to destroy a nation and its cities for political gain.

I wonder, do you really exist?

yet you persist and clamor for space in my brain

in the deep, dark hours when humans sleep.

Were you whistling with the wind

or ticking with the Geiger counters

the day I stepped on your soil?

I thought I heard music whispering

by the town’s rusted merry go round

And many children laughing

on a motionless Ferris wheel.

Were you practicing for a performance

or waiting back stage

in that abandoned theater?

I thought I saw the dust move across the platform

I still wonder, do you really exist yet you persist

So, in the deep, dark hours when humans sleep

Leave me alone in peaceful slumber.

Don’t you remember my heart stood at attention

as I saluted your fierce determination

flying into the face of the fiery furnace

quenching the flames and sealing the reactor.

Were you sitting in your planes, helicopters,

the day I reviewed the graveyard of contaminated vehicles?

If so, Rise up O Ghosts of Chernobyl!

Tell the fools trampling on your sacred soil

There is no bravery in the slavery of free peoples,

there are no heroes who create horrors

and glory in the story of tumbling apartments,

and missiles raining death on sick children and pregnant women.

Tell these conscripted, pitiful puppets of the Moscow Mad Man:

Break your chains, return to your lands,

hold your honor tightly in your hands

before your grandmothers destroy your military photos,

your mothers only pound nails to hang your baby pictures,

and the world’s blame and shame are your legacy.

Speak truth to the invaders:

You are led by prevaricators.

There are no neo-Nazis, you will not find one.

Don’t you realize you were dressed

and sent to replay that part?

You are not heroes, you are fear-ohs!

Cowering under the spell of the Kremlin’s evil pharaohs,

Tell their generals and commanding officers:

No rhymes, no reasons, can justify the war crimes.

The world will not believe when you say

I was only following orders

for you violated the borders

Your ill-gotten medals will turn red hot and burn holes

Oh Yes! Rise up O Ghosts of Chernobyl, Rise up!

And visit your vengeance on the insane

who dare to ensnare the souls of a free Ukraine.