Don Foster once owned the largest appraisal company in Las Vegas. In 2000, he felt God’s leading to sell everything, give away his worldly goods to the poor, and follow Him.

After dutifully complying, seven years later he found himself running an Iris base in Mozambique, started by Rolland and Heidi Baker. While doing significant ministry outreach to some of the poorest people in the world, the Lord (and Heidi) challenged Don to “go lower still.”

That led him to the Mbuti Pygmies of the eastern Democratic Republic of Congo, a war zone at the time he moved there.

“Jesus said, ‘Whatever you have done to the least of these My brethren you have done to Me.’  The Greek word for ‘least’ is literally ‘shortest,’” Don told God Reports. “It is the most important Scripture in the whole Bible, because it unlocks everything else.”

Pygmies are the shortest people on earth, with Mbuti Pygmies averaging four and a half feet tall. Their average annual income is approximately $90; their average life expectancy at birth is 24 years old; and their median IQ is 54. Their literacy rate is only 5%.

Pygmies have often faced discrimination from neighboring Bantus. “Some Bantus consider the pygmies are animals. They killed and ate pygmies and sold their meat in the marketplaces during the wars from 1998 to 2003.”

Don met his Russian wife, Jenya, in Mozambique in 2010 and they married in 2013. Together, they care directly for 31 Mbuti Pygmy children and indirectly for many more. They also pay school fees for over 1000 Pygmy children.

They are directors of a ministry called Love Your Neighbor, Africa.  In partnership with Charles Stanley’s In Touch Ministries, they have distributed thousands of Messenger solar audio bibles.

The couple ministers in Beni, located in northeastern DR Congo, west of the Virunga National Park and the Rwenzori Mountains, on the edge of the Ituri Forest.

The Mbuti Pygmies lived in the rainforest for at least a thousand years, but are among those most often displaced by rebels, logging/deforestation, agriculture, and development. 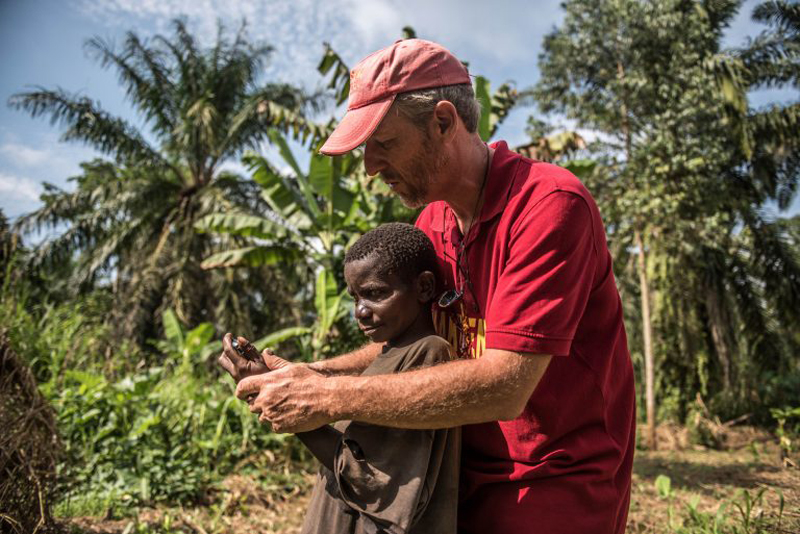 “The rainforest was their food pantry, medicine cabinet, bank account, burial grounds and like their mother and father.  In ancient times, Pygmies believed that the forest is where one goes when he or she dies. Everything originated and ended in their rainforest,” Don explains.

As their traditional food sources disappeared, they were relegated to eat rats, frogs and small fish found in the mud.

“There are over 100 armed groups in eastern DRC. There is war to the north, east and south of us here in Beni – each war is different.” Don observes.  “To the north there is a tribal war. To the east a group of mostly Rwandese are brutally massacring innocents for territory.  Also to the east is a group of islamists tied to ISIS on a jihad to carve out a caliphate under sharia law.  To the south are smaller wars, though no less deadly.

In Beni, where we live, there have been several terrorist bombings. On Christmas Day in 2021, an islamic suicide terrorist bomber killed five people, including one of our children’s school mates.

Beni was at the epicenter of a deadly Ebola outbreak that killed 2232 people out of 3262 infected between July 2018 and December 2019. “This plague came to within 75 meters of our girl’s house.  Some of our close neighbors died from Ebola. Crying and mourning at houses all over Beni has been a regular event for years due to either Ebola or massacres.”

“Many Mbuti Pygmies have never been to school and their children also have little hope of even a few years of education.  Many more thousands would attend school if only they had a uniform and school fees (which cost only $40 per year),” he says.

The traditional Mbuti Pygmy hut has a dirt floor hut and is constructed in a day or two by the women with banana leaves and palm fronds over thin sticks rising to about five feet tall.  “These huts do not protect from rain and cold, much less insects (e.g. mosquitoes) and animals carrying disease (e.g. malaria).”

“A big part of our ministry is to take care of sick pygmies,” Don says. “They can’t stand to stay in a hospital, because of discrimination. Most can’t count from one to 10, so they can’t take pills correctly.”

About a year after Don and Jenya married, rebels attacked a neighboring village and killed 20 people where they had built a church, house, and school. “Two of those victims were a pastor and his wife we sent to that camp. They were dragged outside and chopped up with machetes. Their two youngest children found their dead parents in the morning. Thankfully, two older children were staying with friends.”

“This was really heard; it broke Jenya and me. We had only been married a year. We supported this young couple. They had just finished Bible school and cross-cultural missions training.”

Don’s call to minister to the “least of these” also led him into the prisons. “We also preach in prisons and feed prisoners when they are starving; because the government often does not feed them.”

Some resemble holocaust survivors to Don. “Many hundreds of people have died of starvation in prison. No one should be condemned to starve to death. Sometimes the Red Cross will bring food for a month or two. Sometimes the government will give one meal a day. When they run out, we bring food.”

“A million poor people have been driven from their homes and farms by those who massacre innocent men, women, and children.  Thousands of homes sit abandoned among hundreds of thousands of acres of rich farmland and rain forest which could otherwise feed a nation.”

Working in Beni, Don says he and his wife have been softened by the Holy Spirit. “It is mind breaking compared to the American mentality, because people move so slowly here. We are both products of Heidi’s ministry school; it’s in our spiritual DNA.”

“I want the spiritual DNA of Jesus Christ.”

To learn more about the Foster’s ministry, go here