Vladimir Putin’s designs on reconstituting the old Soviet Union were on egregious display in an address February 21st that outlined his historical grievances, as a pretext for the launch of his invasion of Ukraine. Putin’s tedious, disdainful rant summoned up the haunting echoes of Adolph Hitler on the eve of World War II.

In George Weigel’s excellent piece in the Wall Street Journal, “The Russian Orthodox Church and Ukraine,” he traces the beginnings of Russian imperialism begun by Peter the Great, which continued after the fall of czarism by Lenin and Stalin with their assemblage of the former Soviet Union.

Weigel associates the birth of the Ukrainian identity with a mass baptism in Kiev known as the Baptism of Rus’ in 988, led by Prince Vladimir. The Rus’ people originally were Vikings (Norse people) from Sweden, settling between the Baltic and Black Sea.

According to church tradition, Christianity was first brought to the region by the Apostle Andrew, when he traveled across the Black Sea to a Greek colony in Crimea, where several thousand converted to Christ.

Two years before Prince Vladimir’s mass baptism in 988, he met with representatives from several religions in a quest to choose a religion for himself and his people. He found Islam unsuitable due to its requirement to circumcise and prohibition of alcohol and pork. One of his envoys reported to him that he could find no joy among the Muslims; “only sorrow and a great stench.”

He examined Judaism but concluded they had been abandoned by God because of their loss of Jerusalem.

But when Vladimir’s envoy saw the resplendent Hagia Sophia Church in Constantinople, and the extravagant rituals therein, he was bowled over: “We no longer knew whether we were in heaven or on earth,” he reported, “nor such beauty, and we know not how to tell of it.”

In response, Prince Vladimir returned to Kiev after a military victory in Crimea and urged his people to follow his example by being baptized en masse in the Dnieper River. At first, Vladimir baptized his twelve sons and many high-ranking officials.

The following day most of the residents of Kiev converted to Christianity and were baptized in the Dnieper:  “rich, and poor, and beggars, and slaves.”

Like good King Hezekiah in the Bible, he purged the idols of Kiev, destroying wooden statues of Slavic pagan gods, which were burnt or hacked to pieces.  The statue of Perun — their supreme deity — was thrown into the Dnieper River, according to Philip Longsworth’s history of Russia.

All this took place in Kiev when Moscow “was a thick forest inhabited by wolves and bears,” Weigel notes.

In more recent history, the Russian Orthodox Church has insisted that it is the rightful heir of the Baptism of Rus’.

“It is an integral part of the longstanding Russian claim, now deployed by Mr. Putin, that Ukraine is not a real nation with its own culture and history. At best, Ukraine is a “little brother” to the Russian hegemon,” Weigel explains.

In Weigel’s opinion – shared by Ukrainians — the Ukrainian Orthodox Churches and the Ukrainian Greek Catholic Church have claims to the heritage of 988 more strongly than the Russians.

In 1946, the Russian Orthodox Church, working with the Soviet secret police, formed a church council to liquidate the Ukrainian Greek Catholic Church, which safeguarded Ukrainian cultural identity and national aspirations.

“The previous year, the Ukrainian church’s leadership had been arrested. Those who weren’t murdered were condemned to Gulag camps. The coerced “council,” virtually at gunpoint, acquiesced to an ecclesiastical variation on classic imperialism, as the Russian Orthodox Church absorbed the Ukrainian Greek Catholic Church, which ceased to exist legally,” Weigel recounts.

Dissidents among the Ukrainian clergy and faithful went underground for the next 45 years. “Today, the Ukrainian Greek Catholic Church is playing a significant role in building a religiously tolerant, democratic Ukraine,” according to Weigel.

Patriarch Kirill of Moscow, whose early career suggests collaboration with the KGB, has linked the Moscow patriarchate more closely to the Kremlin. “This includes endorsing Mr. Putin’s absurd claims to be a defender of Christian civilization and underwriting the Putin policy of rebuilding Russian hegemony in the former Soviet space, now styled the Russkiy mir (“Russian world”). 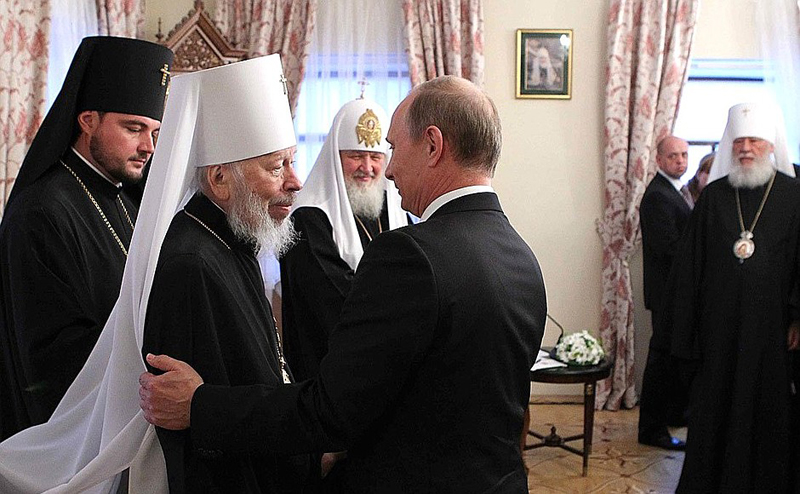 At Putin’s 2012 inauguration, Kirill declared God to be the divine source of the president’s power and described Russian Orthodoxy as both guarantor and curator of Putin’s personal autocracy.

Because Patriarch Kirill and other Russian churchmen insist they hold a monopoly on the heritage of the 988 Baptism, they conclude that Ukraine is and must be a part of the Russian world.

“For a Christian communion with the rich spiritual and theological resources of Russian Orthodoxy to legitimize tyranny and aggression is tragic. That, sadly, is the logic of the distorted history of the baptism of the eastern Slavs perpetrated by too many Russian Orthodox leaders.”