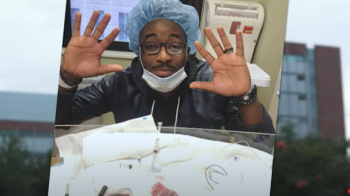 A pregnancy is supposed to fill parents with joy, but Laura Johnson’s pregnancy seemed to detonate a cascade of life-threatening conditions for both her and her baby.

“There were times where the doctors would bring me the worst information you could think of and I would forget about my faith,” husband Sean Johnson told CBN. “I have to sit here and days go by, and pray that my wife don’t die any day now.”

The gospel singing duo saw their hopes fade to panic. First, Laura was taken to emergency with intense abdominal pain that was diagnosed as a 4-centimeter hernia that twisted her stomach and pushed much of her intestines into her chest cavity. It required surgery.

Then, what was predicted to be a 5-hour surgery turned into 5-days of straight surgery at the Medical University of South Carolina in Charleston as doctors opened her up and found things were worse than expected: one lung was compressed, her heart was pushed to the side, and a three-foot section of her intestine was dead.

All the while, Laura was pregnant at 22 weeks.

“I took it back to God,” he adds. “I said, ‘Listen, this is what they told me. So now you gotta figure this out cause I don’t work in this kinda stuff, you work in these kinda ways.’”

Then on day two of surgery, Laura went into labor. She was unconscious when she delivered baby Alora by C-section on Nov. 21, 2018.

You may be hoping for a Disney movie ending, but baby Alora weighed a mere 1 pound and 8 ounces. The tiniest of babies, all of Alora fit into the palm of Sean’s hand. 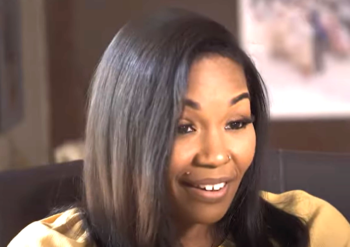 Still, Sean and Laura clung to their faith and sang to the Lord.

“You put her in the palm of my hand, that’s how small she was,” says Sean. “I was excited! It’s life. It’s life here. And my wife was still here. So, I got two people here, instead of none.”

Instead of dying, little Alora hung on. She passed the four-month mark and transitioned to bottle feeding and was released from the hospital after five months.

Not everything about her prognosis was bright, however. She would likely develop cerebral palsy, doctors predicted.

“I didn’t feel any hope from any of these messages at all,” says Sean. “The only hope I had was me going there seeing her still alive.”

“I felt like an army was fighting for me, I mean, generals giving orders,” Laura says “My dad would come and sit at the foot of my bed and just sit there. But you could feel that he was covering me.

“I refused to believe that the Lord allowed me to go through a five-day surgery that they estimated would be five hours, for her to not survive after the fact,” says Laura. “I wasn’t taking that for an answer.”

Alora has astounded doctors with her progress. She receives physical therapy but enjoys great health.

“He’s given me what I need to be able to endure,” Laura says. “I could have been dead, like I literally could be a memory, but I’m not. And I have to believe that I’m here for a specific reason. He left me here to share this story and so as long as I’m allowed to tell it, I will. He’s amazing!”