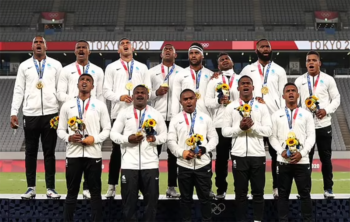 Some shed tears. Others dedicate their win to Mom. A few make political statement with clenched fists or whatnot.

Fiji’s seven-man Rugby team broke into a song of worship when gold medals were hung around their necks at the Tokyo summer Olympics after they stunned New Zealand 27-12. It was their second, back-to-back gold, and for such a small nation in the South Pacific, monumental.

In a time of self-aggrandizing superstars and political propagandists, a showing of sheer joy and spontaneous rejoicing to God is refreshing. The words of their triumphal song come from Revelation 12:11 And they overcame him by the blood of the Lamb and by the word of their testimony, and they did not love their lives to the death. 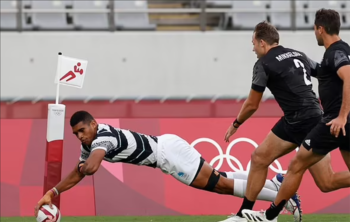 Their victory is also a highlight to Fijians who are currently languishing under strict lockdown, being scourged by Covid.

“Last Olympics we gathered in numbers, tears flowed and bells were rung. Tonight in the middle of a pandemic and (with) Fiji under curfew, pots and pans ring, fireworks go off in yards and the cheers from every house can be heard,” tweeted Fiji Broadcasting Corporation presenter Jaquee Speight.

Due to Covid, Fiji players were called upon to practice 5 months in quarantine. That meant, they couldn’t go home and see their families, and some of the players barely stood the pressure of being away.

Captain Jerry Tuwai, who was part of the team that won five years ago, said his second gold was “more special because we’ve been away from our family for about five or six months.”

The Fijians never left in question their superiority, maintaining their lead from start to finish. By the first half, they scored three tries and led 19-12.

In the second half, Asaeli Tuivuaka raced over to score in the right corner with about two minutes remaining, solidifying their victory. 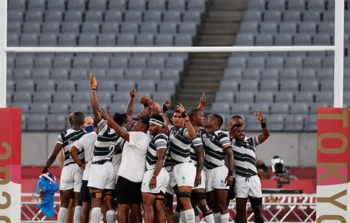 “My baby boy is one year old now, and I haven’t seen him for five months,” Asaeli said. “I didn’t even get to kiss him goodbye when I left, it is tough for me.”

Sevens rugby is a scaled-down version of the usual 15 player rugby.

“We don’t have access to the financial doorways like a lot of big teams do,” said then-captain Akapusi Qera. “But we know that there is a God that we serve and he provides for us and is there for us. We know that our strength is not from us but from God, and it’s all God’s plan. Faith helps keep us together. It helps bond us as a team.”

Rugby is the official sport of Fiji.

“Christian missionaries brought religion and rugby to the islands and the two remained entwined,” said Adam Perrin, who filmed a documentary called “Pacific Warriors,” as quoted on Christian Today. “Faith and rugby are a big part of who they are.”

“My faith is my superpower,” said Vereniki Goneva, part of the 2016 Fiji team. “We know that our source of strength and power is from God.”