The past 18 months have been a challenge for the Mercy Projects team in Ukraine.  First was the sudden loss of director Irina Skrypnik from pancreatic cancer.  A few months later the Covid-19 pandemic arrived. Irina, however, had put together an amazing staff and recommended that Yulia take her place. 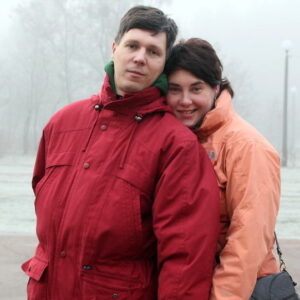 Andrey and Yulia Khoroshylov were born in the Soviet Union to atheistic parents.  They are first-generation Christians in their families and are strong evidence of how the Holy Spirit continues to work in this formerly communist part of the world.

“I was born in Kharkiv in eastern Ukraine,” Andrey said.  “I was so quiet as a child that the other kids called me ‘a monk.’  They said I never talked.  Growing up I was more of a thinker, and I remember questioning Darwin’s theory of evolution in college.  Some Christian students gave me a Gideon’s New Testament and talked to me about God.  I knew evolution did not make sense, so I was interested.

“Then in 1999, my uncle invited me to a Salvation Army youth meeting.  He said there would be lots of girls there, so of course, I wanted to go.  God touched my heart and I repented at that meeting.”

Andrey knew right away that he wanted to serve God, to join the Salvation Army, and to tell other people about Jesus.  No longer known as a “monk,” he actively fed the homeless and shared his faith.  After several years he was accepted to a Salvation Army officer’s course 400 miles away in Kyiv.  The Lord spoke to him that he would meet a special girl at the officer training school.

Andrey instinctively knew that chocolate was the key to a woman’s heart.  He bought a chocolate bar, and when he saw Yulia at the meeting, he gave it to her. Actually, Yulia was not interested, but Andrey’s persistence paid off. 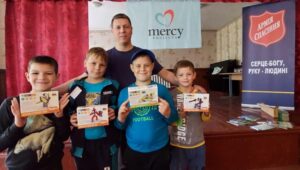 Andrey teaches robotics to orphans in the Chernobyl zone.

“I grew up in a close-knit family in Uzbekistan.  Our East Asian culture meant that all family members were involved in everybody’s life.  My mom was one of six siblings, and I was 12 years old when older relatives began to die.  I remember thinking that my relatives were so involved in my life, and now they were gone.  It made me question what happens when we die.  I couldn’t accept that we simply stop to exist,” Yulia said.

“I remember in 1994 my older sister got married and moved to Ukraine. She could speak English and became an interpreter for some churches.  She wasn’t a Christian but through translating she became one!  I visited her a few years later and she took me to church.  It was my first visit ever to a church.  When I returned home, a friend invited me to a youth meeting and I gave my life to Christ.”

In 2001 Yulia moved back to Ukraine and lived with her sister’s family.  She served in the church youth ministry which led to helping at her first EEO summer camp in 2002.   By 2005 Irina hired her to come on full-time staff and lead the camp ministry together with a co-worker Yana.

She Finally Agrees To Marry Andrey 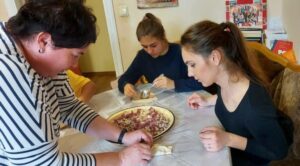 Fast forward to 2014 and by this time, Andrey had bribed Yulia with lots of chocolate.  They got married and shortly thereafter moved to Andrey’s hometown of Kharkiv.  His job was there and his ministry with the Salvation Army was there.  Irina offered Yulia a leave of absence, thinking she did not want to lose her.

During the spring of 2014, the Maidan revolution took place and military fighting exploded in eastern Ukraine.  Irina needed someone for the IT department as well as teaching at-risk kids.  Andrey was more than willing and the new couple returned to Kyiv.

“I still can’t comprehend that we won’t see Irina on this earth again,” Yulia said.  “Often I catch myself thinking she is on a business trip and will come back next week.  We all owe her so much.  She was like a mother to us.”

The heartbreaking loss was magnified three months later when the pandemic hit and everything changed again.  Yulia’s steady leadership, however, looked for new ways to encourage families and build relationships.

“We have lots of fresh ideas on how we can make disciples and encourage families.  Pray for us because very soon we will have hundreds of kids coming to our summer camps.  And thank you for your love and support every day.  We are excited.  God is good,” Yulia said. — ASSIST News

The author of this story, Michael Ireland, is a self-supported media missionary with ANS. Click here to support him as a missionary journalist. He is also an ordained minister and an award-winning local cable-TV host/producer. Michael has served with Dan Wooding and ASSIST News Service (ANS) since its beginning in 1989. He has reported for ANS from Jamaica, Mexico, Nicaragua, Israel, Jordan, China, and Russia. Follow Michael on Facebook at MichaelIrelandMediaMissionary and on Twitter at @Michael_ASSIST.