Before Dorothy Booth went to be with the Lord at age 97, her daughters asked her to send them a sign from heaven that she was doing well.

“For the last few years that she’d been getting older, I’d asked her, ‘Mother would you send me a cardinal when you get to heaven?’” daughter Jeanne recounted to The Unseen Story. “She took us to church growing up and she was a faithful believer in the Lord.”

Family members described Dorothy as having a childlike faith, because she accepted the truth and didn’t doubt.

On January 9th, 2019, Dorothy succumbed to congestive heart failure and passed into the arms of her Lord and Savior, Jesus Christ.

That morning, Jeanne remarked to her daughter, “I know I asked for a sign, but I just don’t know if it could happen. God’s probably up there saying, ‘Oh, yea of little faith.’

A few hours later, as they played Canasta, they heard a loud thud against the window. Jeanne’s husband, Brian, went out to see what caused the sound. He saw their dog hovering around something excitedly.

Suddenly Brian realized it was a red cardinal – still very much alive!

Brian walked back into the house, cradling the bird in his hands, saying, “Wow.”

“The bird was just sitting there on the ground and the dog was kind of sniffing around it, but the dog wasn’t touching it,” Brian exclaimed.

There didn’t seem to be anything physically wrong with the bird. Later, Brian said that when he picked up the bird, it didn’t fight, it didn’t try to get away. “It just kind of fluttered a little in his hands and he brought it inside.”

“We just started petting it,” Jeanne says. “At first you could tell it was a little stunned, but then it calmed down and it was fine. We just petted it and talked to it. My sister held it and then I think I held it there.

“We were all just in awe, and we were crying,” Jeanne’s daughter, Lori said.

“Is this it? Is this the sign? Is it? Could this really be it?” someone asked.

“How could it not be it? It has to be it!” Lori exclaimed.

“Everybody was just in awe and we could not believe this was happening.”

After holding and petting the bird for about 10 minutes, they all went outside to release it.

Dorothy’s two daughters, Deborah and Jeanne, were holding it and petting it and finally Deborah lifted her arm and the two sisters attempted to release it together.

But the bird flapped its wings and hovered in the air for a brief moment, then flew back on to Deborah’s shoulder, as if to say, “No, I’m not ready to go yet.” 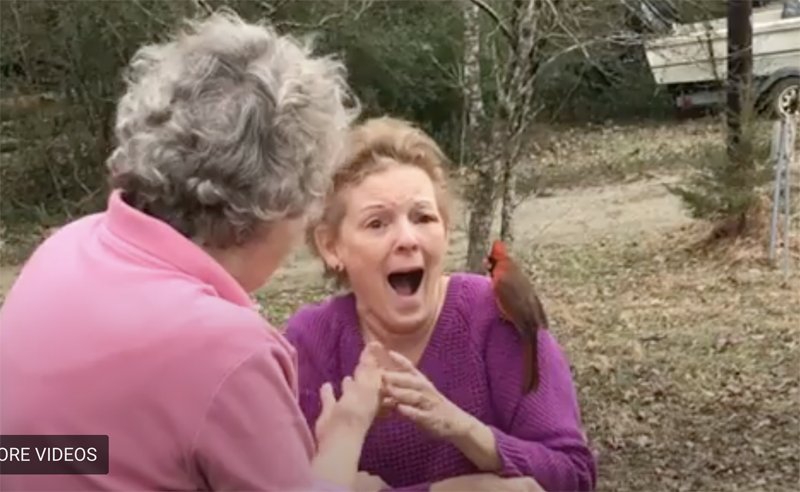 “We were just amazed that the bird flew back on her,” Jeanne said. Then the cardinal jumped from her shoulder to her chest and stayed there, close to her heart.

“It was sitting on her heart for a while,” Lori recounted. “It was very content.”

After several minutes, they took the cardinal and put it on the branch of a tree, so it could fly away.

It stayed there for a minute or two and, and it suddenly flew away. 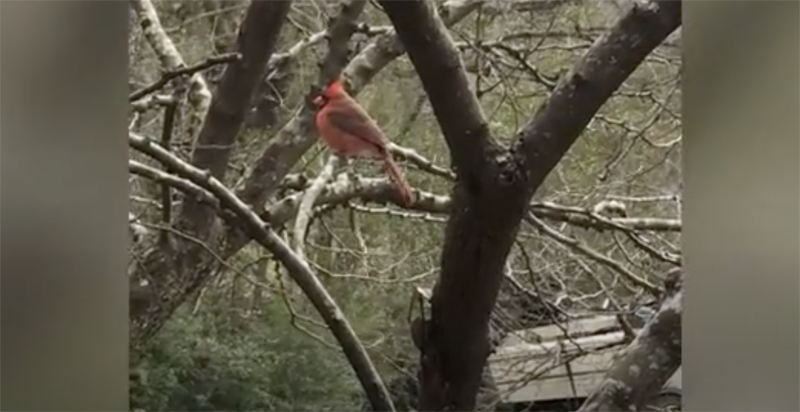 “So it was very thrilling and exciting because we couldn’t really doubt this, that it was a sign. We were all thanking God and just praying; we were all so amazed that He would actually answer our prayer. And it’s reached a lot of people so we’re just, we’re just happy and thankful that it happened.”