Jeff Levitan had made millions by age 30, so he did what was expected: he retired to his beautiful home and a life of luxury funded by investments that would continue to churn out income for the rest of his life.

Two months later, he came out of retirement, finding himself bored.

Jeff realized that he needed something better than money and its trappings. He needed to find a higher purpose to animate his life.

Today, he’s back at financial advising and making money. The difference now is that he launched the All For One Foundation, which establishes orphanages around the world.

These are not your typical orphanages. He refers to them as “prosperity centers.”

If that name gave you pause, it does for a lot of people. They’re teaching the lessons of capitalism to poor little kids in countries with weak economies. Are the principles of wealth creation and wealth management the exclusive domain of developed countries? Or do they apply to the rest of the world also?

Jeff’s initiative is going to find out.

While the United Nations throws money at the world’s problems, the All For One Foundation is teaching some of the poorest orphans in the worlds how to break the cycle of poverty for future generations.

“All For One is doing more than just giving children of the world hope,” says a promotional video. “All For One is actively working towards building the systems needed not just to survive but to thrive. We’ve seen firsthand the lasting impact our projects have had around the world.”

For 20 years, these orphanages and schools in Sierra Leone, Nicaragua and 27 other nations, offer 25,000 kids (and sometimes their moms) shelter, food, health care, clothing and education — both regular academic classes and special financial courses.

Financial education – the stuff of Warren Buffett – in the developing world. Wrap your head around that.

Jeff Levitan is undaunted by the quixotic nature of his dream. He knows that one man with a vision can impact more than an entire bureaucracy at the United Nations.

Jeff was raised in the Chicago area. His dad was a grumpy trucker and argued with mom about finances and often gave the kids tongue lashings.

Since finances were a major source of stress in their household, Jeff decided he wanted to be free from it; he wanted to be rich. He doesn’t remember a college class because he was too busy partying and fighting. Somehow he managed to graduate.

Upon graduation, he was surprised to find that financial companies weren’t beating down his door and begging him to work for them. After applying everywhere, he was offered a job with Federated Mutual of Minnesota. After wearing through the soles of his shoes walking to many appointments, he landed only one contract in his first year.

It wasn’t the American Dream he’d hoped for, so he came on board with World Financial Group, where he made millions.

He was a Christian now. He had achieved his dream and wondered what was next. Retiring at the enviable age of 30, he sailed off into a life of ease.

But it was boring. He lasted two months. 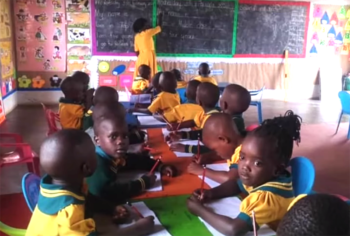 He didn’t want to retire. But he didn’t just want to increase his riches ad nauseum. He sought to use his success as a springboard to significance in biblical terms.

In 2006, he visited an orphanage in Uganda and was deeply moved by the joy he found in the eyes of the children, despite their hardships. Jeff decided this would become his motivation to make money – so he could bless others. This is what Christians do.

When Ebola erupted in Africa, Jeff redoubled his work. All For One opened a 22,000-square-foot Child Prosperity Center for 1,000 kids in Sierra Leone in 2015.

Will the next billionaire come from the developing world? Stay tuned and watch.