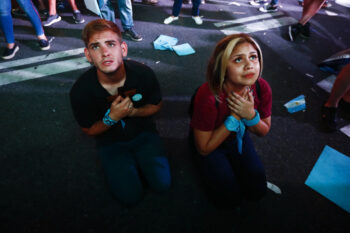 The Senate vote means that baby-killing will be legal in the largely Catholic country up to the 14th week of pregnancy and even later in cases of rape or danger to the mother’s life. The country is 83% Roman Catholic and 11% evangelical, according to the Joshua Project.

Thirty-eight voted in favor of the measure, 29 against, and one abstention at the end of a session that began December 29th.

“The bill had already been approved by Argentina’s lower house, the Chamber of Deputies, and has the support of President Alberto Fernández, meaning that the Senate vote was its final hurdle,” according to The L.A. Times.

A group called “defenders of the two lives” set up an altar with a crucifix under a blue tent outside the congressional building. “These politicians aren’t representing the majority,” Luciana Prat told The Times. “In all the polls, people are against this.”

The bill permits a conscientious refusal to participate in an abortion for doctors if all the physicians in the practice are opposed to the procedure. If they refuse, they will be required to refer the woman to another medical group. Conscientious objection will not be allowed if a pregnant woman’s life or health is in danger. There will be no similar regard for the life or health of the baby.