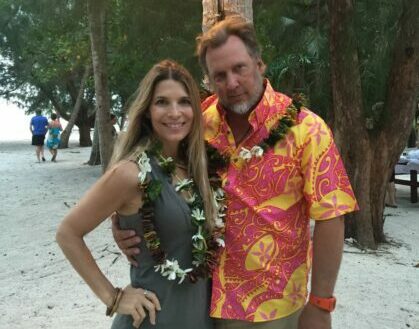 “You have two weeks to live.”

Those were not the words that Hawaii-based artist Vera Kirkpatrick expected to hear after a routine blood test with her doctor. She worked out twice a day and kept herself in peak health.

All of sudden, she needed her husband, a man she had grown distant from in her self-sufficiency.

Looking back, Vera had grown up in an impoverished, fatherless home. “There were six kids. We had nothing,” Vera says in a CBN video. “So my whole idea was, ‘If I’m successful and I have finances then people won’t look at me as a poor orphan. They will see my success.’”

Creating and selling in-vogue art pieces brought her fame and finances. She married, had three kids and moved to Hawaii where she and her husband, John, ran two art galleries. Vera had all the pieces of success.

But she felt John, who adored her, was too controlling, and she contemplated leaving him.

“I wanted to create my own rules, my own world,” she says. “John ended up putting me on a pedestal, and that was good for a while but then I got tired of that. I didn’t want to be molded and shaped. I’m the powerful person. Not ‘we’ but ‘me.’” But the mulling of separation got cut short abruptly in 2009 when Vera, after skipping doctor’s checks for six years, finally went in for a physical and the doctor ran a standard blood test. He found leukemia.

“What’s Leukemia?” Vera asked when he broke the news. “Wait, is that a cancer?”

“Yes,” he responded. Then he delivered awful news: “What’s worse, I think you have about two weeks to live.”

“Acute Leukemia, in the absence of urgent treatment, is rapidly fatal,” he says. “It is typically within weeks without treatment you will die.”

Vera turned to the God she knew only superficially.

“Okay God, I’m at a crossroads here. Are you real? Can I call on you?” she prayed frantically. “Are you able? All these stories and all these things were they for real my whole life? Are you mad at me? Will you even listen to me now?”

Her self-made world crumbled. She had achieved success all by herself, and she was proud of it. But with cancer circling, she realized her self-sufficiency was utterly meaningless.

“I’ve been doing everything on my own terms,” she mused.

“I reached out for a life saver and that was God,” Vera remembers. “I went back to my roots, because I wasn’t going to save myself. And you can put your trust in medicine, but the ultimate healing is going to have to be God.” Within two days, family came to watch the kids while Vera and John traveled to Seattle where they met Dr. John Pagel at the Fred Hutchinson Malignant Growth Exploration Center.

Intense Myeloid Leukemia or AML was his diagnosis.

“Not just garden variety AML, one of the worst kinds of AML you can have; really high risk,” he said. He recommended using a novel regimen of chemotherapies, something rarely tried in other patients.

“We really weren’t sure it would work, but we did feel it was important for her given the high risk nature of her disease.”

Scriptures brought comfort to Vera. “The scripture, Jeremiah 29:11: ‘For I know the plans I have for you, not to hurt you or to harm you, but to give you a hope and a future.’ I took that literally.”

John remained close by and trusted God for her healing. Their kids traveled to Seattle to visit and invest energy with her.

Be that as it may, the days got darker and darker.

“I was overwhelmed,” John recalls. “And in my pocket — I don’t know if I heard something or whatever — I just reached into my pocket, got my phone out and they are like, ‘This is the CBN prayer line.’”

Despite the circumstances, John felt God’s assurance and a promise of healing for Vera.

Following the prayers, Vera’s cancer went into remission for a time, but the doctor said stem cell treatment was necessary. They searched for a donor with the same blood type and remarkably, they found a man in Tel Aviv who was a match and volunteered.

Twenty-one days after the transplant, Vera left the disease center to be observed off grounds.

“I personally believe that God had His wonderful hands all over Vera,” Dr. Pagel says. “No question about it. You could see it every single day when you saw her.”

John and Vera say the promise God gave them came to pass. “I think the message to me was if God gives you a promise, trust in that promise because it will come to pass. No matter what the circumstances say, trust in what God has spoken to you,” John says.

Vera’s heart also found healing. “It’s a beautiful love affair with God and I now. And He mended my broken heart. He fixed my marriage and brings peace and joy to my home, to my stores, my galleries, and He’s radically changed the children’s hearts through God. And even my little nine-year-old (says), ‘Jesus healed my mommy’s blood.’