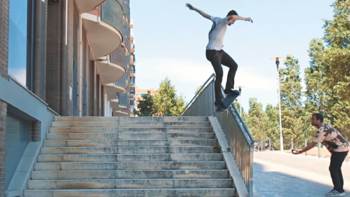 Shaun Hover is a skateboarder missionary.

The Michigan native never thought he would amount to much. He did not have any career ambitions, and he never even thought he would be successful, because as he says on a “This is Me” video on YouTube, “I didn’t have anything to give.”

He hung out with fellow skaters, smoked weed and took six months to learn how to do an ollie, one of the easiest tricks. He loved being on a board and loved to go out and film with his friends, but did not think he would ever be a pro skateboarder.

Yeah, it’d be great to become a pro skater, but that’s not possible, he remembers thinking. Looking back, he says, “That was a bunch of insecurity. And lies. And I believed them.”

Nevertheless, by his late teens, he found himself sponsored. He was a professional. Skateboarding was more than a hobby or even a job. “It was my identity,” he says. 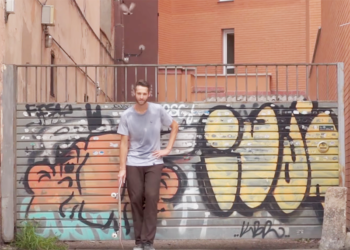 When he turned 19, he found his other identity. He decided to read the Bible his brother gave him two years earlier.

“At the time time, I thought it was the worst birthday gift ever,” Hover says. “But now, I’m pulling this Bible off of the shelf and I’m like, ‘ God, I don’t if you’re real. I don’t know if I believe. I don’t know if I’m talking to anyone right now. But I’ve heard this is your Word. I’ve heard that You are faithful to deliver on your promises. If this is You, will You speak to me?”

Growing up, he had parents who believed in God and went to church, but he says, “I just didn’t grab ahold of it.”

But his brother’s gift opened his eyes to the Gospel of Jesus. The Word and the Spirit moved powerfully on his heart and he told God he wanted to turn his life over to Him, and wanted to trust Him with everything.

Hover was born again and received a new identity in Christ!

“As soon as I started reading the Bible, He gave me this hunger for his Word that has not left. I couldn’t put it down,” he recalls. 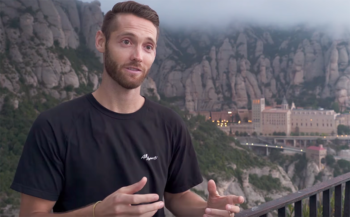 Shortly after that a friend called him on the phone. “Hey you wanna hang out, skate and smoke weed like we do everyday?’

He knew that God might not call him to skateboard anymore, but he turned that part of his life over to Him anyway, saying, “It was like, I’m giving You my identity. If You want me to skate, if You don’t want me to skate, whatever.”

Clearly, he perceived that God wanted him to skate and he started skating more. He won contests, got a sponsorship with DC Shoes, and moved to Los Angeles.

He loved Jesus and skating! What more could he do with his life but marry the two in ministry? He started connecting to Youth With a Mission.

At first, he didn’t have a vision of how he could use his skating for Jesus. “People would say to me, ‘You need to start a skateboarding discipleship training class.’ And I would say, ‘That sounds so lame.’” 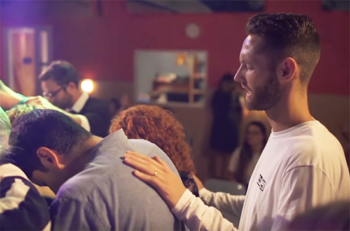 It was unusual to think about a skateboarder school that doubled as a discipleship class.

“I was going to our local skate park every Friday. We’d have barbecues. We’d have a skate contest. We’d hang with the skaters,” he says. “Skateboarding to me was just like a side ministry. But the more I spent time at this local skate park, the more the Lord was growing my heart for skaters.”

Then God spoke “in a gnarly crazy way.”

God told him to multiply the skate barbecues for “the entire planet,” he says.

“I was like, ‘Whoa,’” he recalls. And then the wheels in his brain started rolling: “We need to be training skateboarders as missionaries.’ God’s like, ‘Hello. What have you been doing for the last couple of years with Youth With a Mission?’”

His ministry was baptized with the name “Calling All Skaters Discipleship Training Ministry.”

Skaters from different parts of the world come together and spend six months living together, reading the Bible and conducting outreach in Los Angeles.

They went to China, where there aren’t many skaters but there are lots and lots of skateable public sites.

In China, he received the call to Barcelona, considered the epicenter for skateboarding worldwide. “They have all these skateboarders from every nation, representing all these cultures, all in one place.”

Using his skateboard to establish a common ground, he would meet total strangers, skate with them and eventually wind up sharing his faith.

He and his fellow skaters landed in Barcelona with no contacts and no money. “We had no idea what we were doing,” he says. “But I just had this thing. I was like, ‘This is from God.’ I have to do this.

“That trip in 2008 was the seed for what this ministry would become,” he says. The outreach spread across Europe.

“We’ve watched God come through in miraculous ways to take care of us so many times,” he says.

Shaun married and went to Barcelona again when his wife was pregnant. The couple shared an apartment with nine other guys and only one bathroom.

They only returned to LA when it was time for her to deliver the baby. He had no place to live, no money and no health insurance to cover medical expenses.

Trusting God, He came through for them and provided everything they needed. “I have no other way of explaining it other than God showed his faithfulness to us as we’re simply walking out the mission that He has given us.”

Today, Hover splits his time between Barcelona and Los Angeles, the skateboarding capitals of the world, presenting the gospel to a segment of the world’s population that is sometimes derided for imperiling pedestrians and ruining cement benches. 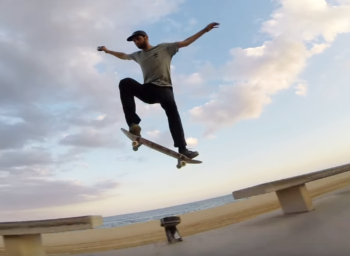 “People who know me from before I knew Christ are like, ‘I’m so glad you’ve found something to make you happy,’” he says. “But I wasn’t trying to find happiness. I was just trying to follow Jesus. Part of the human desire is you want to have a reason for living beyond your own happiness.

Pat Cannon is a student at the Lighthouse Christian Academy in Los Angeles.