Filmmaker Julian Schnabel’s immersive film about the final years of Vincent Van Gogh’s life portrays the artist’s descent into madness, even as his artistic achievements soared beyond many of his peers.

“Christ does not come up at any time in this film,” says William Havlicek, Ph.D., author of Van Gogh’s Untold Journey (Creative Storytellers). “There are profound ideas that are deeply Christian brought up in the film but unbeknownst to some degree by Julian Schnabel, who is not a practicing Christian. But Schnabel can’t deal with Van Gogh without dealing indirectly with some of these things, because he was all about this.”

Many admirers of the iconic artist are not aware of his spiritual journey. “Van Gogh had an understanding of theology. He was trained in Greek and Hebrew, could even translate the Bible out of Greek and Hebrew. He had studied with a well-educated theologian. Van Gogh could quote Scripture and especially loved Paul and the gospels. He also loved the parables of Jesus.”

While many want to focus on Van Gogh’s mental instability in his final years, the artist’s relationship with Christ was evident in his work and prolific letter writing.

“Van Gogh was painting the parables of Jesus just weeks before he died: The Good Samaritan, the Resurrection of Lazarus,” Havlicek notes. “In the last months of his life he was obsessed with those very direct spiritual images that had to do with resurrection and transformation. He even painted his own face on the face of Lazarus.”

Van Gogh’s father and grandfather were pastors. As his personal relationship with Christ deepened in his early twenties, he wanted to study theology, but failed his entrance exam for seminary. Instead, he went off to serve as a missionary to coal miners in the Borinage district of Belgium.

He found miners who were living a miserable existence, without adequate food, water or warm clothing. Motivated by Christ’s compassion, Van Gogh gave away everything he owned to them, including most of his clothing, even as he tended to their medical needs.

“His own mother talked amazingly about his skill as a nurse. It played into his handling of paint. No one seems to know Van Gogh the nurse. As far as I know I’m the only one who has written about it. It is amazing the historians have overlooked this,” Havlicek says.

Sadly, a church synod of 14 overseeing Vincent’s work among the miners thought he suffered from excessive zeal and fired him because he did not dress or preach eloquently.

“Van Gogh was trained as a pastor and understood theology,” Havlicek observes. “He did believe the world was created by God. I don’t believe he ever stopped believing that. At the end of his life he talked about Jesus being the supreme artist. He said there is no other artist like Jesus who transforms men. Instead of paintbrushes, he used men like Peter and James and created a new way of seeing the world through the gospel. It is a radical creative and imaginative leap.”

Many viewers of the film may not realize that the filmmaker, Schnabel, was a very well recognized contemporary painter in the 1970s and 1980s. “He would have had a great sympathy for the struggle that Vincent had of being recognized or even understood in his lifetime, because Schnabel dealt with that himself,” Havlicek notes. “It comes thru in the film, the tension between artistic imagination and vision and incredulity and even rejection by many people.”

Actor Willem Dafoe masterfully portrays Van Gogh’s inner life, creativity, and intellect. “He looks a lot like Van Gogh with his weathered face. It was a very empathetic portrayal of a humble and gifted man, but not purely accurate. It wasn’t intended to be. It is more of an impression.” 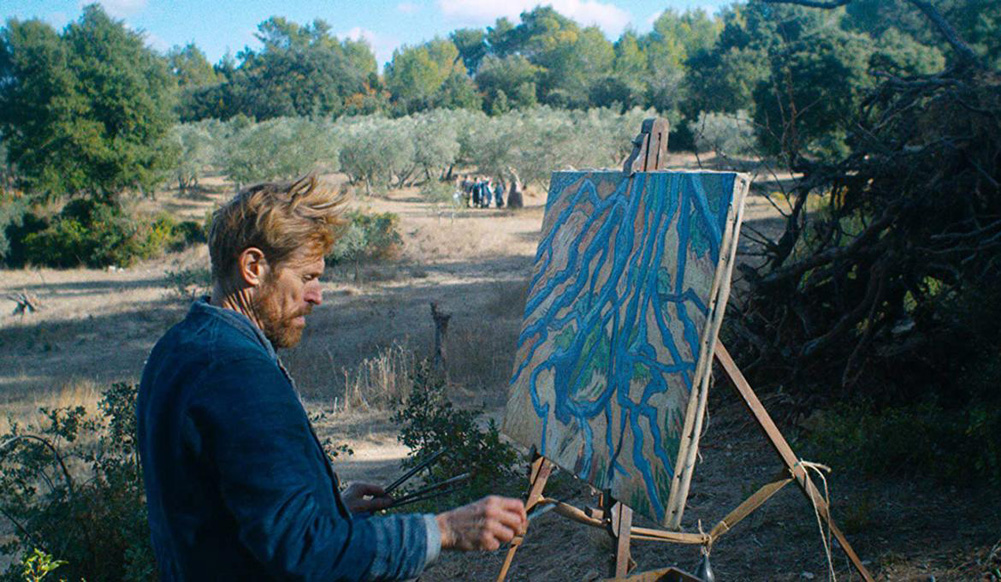 “A Christian could walk away from this film with some important insights. Francis Schaeffer was upset that evangelical Christians were not knowledgeable about the power and importance of the arts.” Schaeffer cited the psalms of David and the care with which the Temple of Solomon was constructed as examples of God’s focus on the arts.

“God takes great interest and care about the way things are made that have a poetic and expressive and symbolic meaning,” Havlicek observes.

In the film, Van Gogh’s appreciation of the arts and good writing is made clear. “There is a scene when he talks about Shakespeare. He had all of Shakespeare’s collected writings and carried them with him. He understood the value of the best of the arts.”

“The value of a Christian seeing Eternity’s Gate is that they could come away with an appreciation of what it took for Van Gogh to be an innovator, to start painting things from nature, but in a fresh way. When you see an artist as a minor creator, capturing the beauty of the world in an imaginative way you begin to appreciate that everything we view in nature was created by a Creator. If you believe this it changes your perception of nature completely. You walk by a tree and realize that beauty is intentional. It can bring a radical change in the way you see life.”

One scene in the film shows Van Gogh standing in a field, almost in ecstasy, with his hands down, walking through grass, bathing in the world. “He rubs dirt on his face and lays down on the ground as if he wants to get closer to the earth.”

While Havlicek says the scene is fictional – it never happened – “it’s an exaggeration that lies but doesn’t deceive.”

“Van Gogh was a man of the earth – that’s true — but also believed in the resurrection, which is a very physical way of understanding transformation. He believed in the literal resurrection of the body. That is very important in his theology and artistic expression.

“He understood his making of an object as a type of spiritual resurrection. The artist takes raw material and transforms it through vision and imagination. It is a minor way of echoing what God did in creating man from the dust.”

Dr. Havlicek also took issue with another invented scene between Van Gogh and a priest, which takes place during the period Van Gogh was hospitalized at an asylum at Saint-Rémy. “The priest wants to see one of Van Gogh’s paintings,” Havlicek notes. “He is completely dismissive of it and turns it against the wall after he leaves, like he can’t bear looking at it.

The priest asks, “You think you are revealing something about God and beauty in your work?

“Yes, I know that I am,” Van Gogh replies, “but I also believe my work is for another generation, one that doesn’t yet live.”

Dr. Havlicek believes this is an exaggeration because there were artists already admiring Van Gogh’s work, even if the general public was slow to appreciate his genius.

“It reminds a little of the gospel message, the way it was repudiated by high priests in the Book of Acts, the tension the gospel caused, the freedom of the gospel was a curse to people who were law keepers. It took their authority away from them.

“Van Gogh is portrayed as a very humble man and he was misunderstood. You see this gentle humble guy repudiated, and you come away with sympathy and pity for him.

After Van Gogh arrived in Arles in 1888 he started painting portraits of the townspeople. “He said I want my portraits to look like the early Christians from the time of St Paul who were practicing true Christianity — before ‘churchianity’ took over. I want these people to look like spiritual beings, filled with the joy of the freedom of the gospel.

“When Van Gogh turned to art he said this is my way of practicing theology — it will be an art form that will be highly spiritual.”

While some in popular culture are fascinated by Van Gogh’s so-called madness, Havlicek sees it differently. “Van Gogh suffered from severe epileptic seizures that would last for up to two weeks at a time. They would disable him to such a degree it was like someone who had a stroke. They expected him to act normally, but he was disoriented during those times. People thought he was crazy. But they didn’t realize he had just come through severe epileptic seizures.”

“He said in his letters to his brother, ‘I’m sorry Theo I didn’t write for two weeks. I couldn’t write. I didn’t have control of my hand. It took me two to three weeks to recover from my last grand mal seizure.”

While the film depicts Van Gogh becoming disoriented, it doesn’t show him ever having a seizure. “It gives people the impression he was schizophrenic, but he wasn’t schizophrenic. The doctors who treated him said he had grand mal seizures of a very severe sort.”

Van Gogh’s heath issues may have been induced by his consumption of absinthe. “Van Gogh himself said he believed the absinthe played into the symptoms. It affected his central nervous systems. Toulouse Lautrec was also using absinthe at the same time. He had the same kind of symptoms as Van Gogh. He died at 38, had similar symptoms, hallucinations.”

“The film shows him acting in a very crazy way, but not how or why or what. The general view is that Van Gogh was bipolar and schizophrenic, but he could be very calm and reflective and enjoyed reading and writing for long periods, writing almost every day.

“If he was truly bipolar he wouldn’t have wanted to write to someone every day. He would have been depressed. He carried on extensive letter writing every day for almost his whole life, writing at least one letter a day.”

“It is easy to put him into a postmodern polarity, but it was more complex than that.”

Van Gogh’s imperfections were plain to see. “He consorted with prostitutes and contracted syphilis at one point. We also know he had gonorrhea because he talks about it. It didn’t manifest in a particular way but added to his health issues.

“He is more like Samson, who was not a perfect Israelite. Samson ended his life as a suicide, pulling the building down on the pagans, yet he is in the Hall of Fame. Ironically it is a suicide that God glorified.”

“Van Gogh is sympathetic and accessible, because we can find our own brokenness in him. He brought us beauty, goodness and truth and didn’t hide his own insecurities.”

Van Gogh’s untimely death is also a source of controversy. “The film shows him being accidentally shot. It is a thesis or idea circulated for several years, that some young boys shot him. It is possible, but we don’t have absolute proof. There is also evidence to suggest he took his own life. I’m not sure we will ever know.”

Dr. William Havlicek has over 30 years of experience in college teaching, museum administration, publishing and fine art/studio production and exhibition. He holds a Ph. D  from Claremont Graduate University. Proceeds from the sale of his book are donated to PROGENY, an international organization dedicated to the rescue, treatment, and rehabilitation of exploited and endangered children and the pursuit of justice on their behalf.