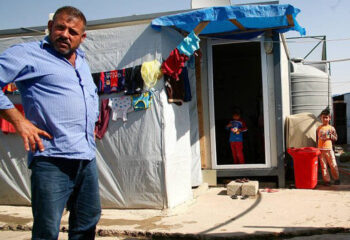 Mahmod*, a devout Muslim, lived on a ranch in northern Iraq when Islamic State (ISIS) fighters invaded Mosul in June 2014. He openly sympathized with ISIS and welcomed their presence in the area.

“The married father of seven children already felt Christians should be killed because they were “infidels,” according to a report by Christian Aid Mission (CAM).

Three months later, ISIS militants confiscated his home and turned it into a weapons storage site. When he tried to challenge their actions, they beat him and seized his wife. He never saw her again.

“From there, I started a journey to learning more about Islam, because everything they did was based on religious references from the Koran and Hadith [sayings and deeds of Muhammad],” he told CAM.

The more he studied Islam, the more troubled he became, and he expressed his doubts openly. This caused the ISIS fighters to treat him even more harshly and Mahmod was tortured because of his growing defiance.

One day he decided to escape with his children. “I ran away to save my children, and when I reached my tent in the desert, my arm and chest bones were broken because of the torture,” he said.

Mahmod reached a camp for displaced people overseen by local Christians, who began to minister to the needs of Mahmod and his children.

“I remember the first person who treated my wounds was a Christian who carried a Bible and prayed for my healing!” he told CAM. “I did not understand him at first, but I saw Christ in him. As he gave me a Bible, I remember telling him that it would take a miracle for me to accept what he was talking about.”

The more he studied the Bible and talked with local believers over the next three months, the more open he became.

Then one day, the power of the Word and the Spirit brought change to his heart. “I accepted Jesus Christ as the Lord of my life,” he said. “It’s a miracle! I love everyone now!”

“Iraq is one of the countries in the Middle East where the most Muslims are turning to Christ,” the director of the local ministry told CAM. “Mosul remains largely desolate from destroyed homes and services, and most families have remained in camps rather than return,” he said.

“Every month I see dozens of families coming to the Lord,” he told CAM. “They surrender their lives to Christ, and then we see the Lord perform the miracle of changing them, healing them and liberating them from the chains of evil. Dozens of them join the church, send their children to the Bible school and engage in home prayer groups with great passion and persistence.”