In the fall of 2017, Ricky Skaggs found himself in Texas with nothing to do for a day, after a church canceled his scheduled Saturday night appearance. He remembered a friend of a friend who lived in the area — someone Skaggs wanted to meet after the man had sent words of encouragement for Skaggs via text messages to their mutual friend. So he made a few phone calls, and soon the country and bluegrass music star found himself in a stranger’s home in Bertram, Texas.

After a brief exchange of pleasantries, the man said, “The Lord is giving you more fame to glorify His name…. This is the year that you’ll go into the Country Music Hall of Fame.” Skaggs wrote the man’s words down in a notebook and even recorded the conversation on his iPad.

The man made the prediction one year to the day before its fulfillment. Skaggs was inducted into the hallowed hall Sunday, Oct. 21st.

“You think that’s a coincidence?” Skaggs asked. “I don’t. God never does anything in coincidences.”

A longtime member of First Baptist Church in Hendersonville, Tenn., near Nashville, Skaggs believes God wants to be intimately involved in life’s details.

“The Lord likes coffee,” Skaggs said of his regular time with God. “He doesn’t mind me pouring Him a cup of coffee.

“If we invite Him in every morning, He looks forward to it….

Skaggs has seen God at work throughout his five-decade career, but never more than in the past year, when in addition to his country music recognition, he was inducted into the Bluegrass Music Hall of Fame and the Fiddlers Hall of Fame.

“It’s amazing to see what the Lord has done,” he said. “God has been showing up and showing off.”

From prodigy to prophet

Born in 1954, Skaggs began playing mandolin and singing in churches and stores around his hometown of Cordell, Ky., as a young child. Once when the great Bill Monroe came to town, the Father of Bluegrass Music asked “Little Ricky Skaggs” to join him on stage for a song, put his own mandolin around the youngster’s neck and a career was born.

At age 7, Skaggs earned his first paycheck performing on the popular Flatt & Scruggs TV Show. He was playing for a living while still in his teens and was a recognized master of the genre by age 21.

In the late 1970s, Skaggs took the virtuosic musicianship and homespun subject matter found in bluegrass, added some Nashville sensibilities like piano, electric guitar and drums, and took country radio by storm. During the ’80s, he had 12 No. 1 country radio hits, won four Grammy awards and was named the Country Music Association’s Entertainer of the Year (1985). 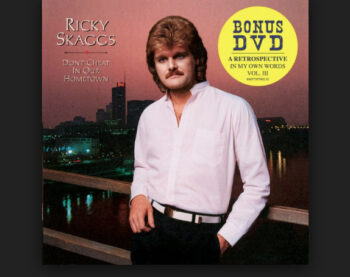 The 90s and 2000s saw Skaggs start a record label, Skaggs Family Records, form his band Kentucky Thunder and return to his bluegrass roots. On his own label, he’s received 11 more Grammy awards (for a total of 15) for his own recordings as well as those he’s produced.

These days, a concertgoer at a Ricky Skaggs and Kentucky Thunder show is as likely to hear a gospel song or a testimony as one of the artist’s many hits. With his long, white hair and broad shoulders, Skaggs gives the impression of a modern-day John the Baptist come to prepare the way of the Lord.

But he’s quick to say that he’s not a “Christian musician.”

“My work on the road is a marketplace ministry. I feel like Paul many times,” Skaggs said. “Paul was not making Christian tents. He was a Christian making tents. I’m not a Christian musician. I’m a musician that’s a Christian. Big difference. The Lord told me a long time ago when I first started trying to speak and go to churches, ‘You can go to churches and speak, but that’s not your calling.'”

Skaggs was baptized at Holiday Heights Baptist Church in Hendersonville, Tenn., at age 21.

“I got saved when I was 13,” Skaggs recalled. “But I really didn’t grow as a Christian.” An offhand remark from a relative after his salvation stunted him for some time.

When Skaggs was unable to describe how he felt about being saved, the family member said, “‘Well you must not have got saved then, if you don’t know how you feel,'” Skaggs recalled. “And that seed of doubt crept into my heart. And it wrestled me for a long time.”

For several years, Skaggs said, “I was pretty void of the Word. I didn’t have a whole lot to fight with.” After struggling to read his family’s big King James Version Bible, he was given an NIV translation by a friend.

“It was so easy for me to read,” he said. “I started reading that and seeing God’s promises to me.”

Soon, he wanted to recommit his life to the Lord and be baptized. And he has never forgotten the effect one remark can have on a life.

“It’s one thing when the world says something to you,” he said. “The world don’t have the Holy Ghost. A Christian that is born again, the Spirit of God lives in them, they have the Holy Spirit of God living in them. When somebody like that speaks a word, that word has power. We don’t realize how much power we have in our words…. The Lord says we’ll be held accountable for every idle word that we speak.”

Skaggs has more people listening to him than most, and he is careful to use

his considerable platform to encourage people and lift up his Savior. He has a few words for the church too.

“The Achilles heel of the church is unforgiveness,” he said. “Finding fault. Judging others….

“We’ve got to always stay humble. That means take the low position. We have to live a repentant life. People think they don’t have to repent…. First John will tell you that you’re a liar if you say that. We’ve got to always examine ourselves.”

In early 2018, after playing the Grand Ole Opry, Skaggs and his wife Sharon were asked to come to a private room backstage for a meeting with a Country Music Association executive.

“When I heard the door close, I thought, ‘Nah, I’m not going to think this could happen,'” he said. Then the woman just smiled, confirming his hopes.

In a speech prior to placing a medallion around Skaggs’ neck at the Oct. 21 induction ceremony, fellow hall of famer and superstar Garth Brooks recounted how Skaggs’ music came to define country music in the 1980s.

“This was a breath of fresh air for everybody like me….” Brooks said, recounting how Skaggs’ music influenced him as a young singer and songwriter. He closed by declaring the “genius” of Skaggs and speaking directly to his friend on the front row.

“Remember, I’m going to school at Oklahoma State,” Brooks told Skaggs. “I’m surrounded by geniuses. I’ve got PhD’s every day for four years of my life…. And not one of them communicated with a 19-year-old boy. Never. But you? You spoke straight to me.”

Country Music Hall of Fame Director Kyle Young then presented Skaggs with Bill Monroe’s mandolin — the very instrument Skaggs had held almost 60 years earlier as a young child, removed from its glass enclosure in the adjacent museum just for the occasion. A visibly moved Skaggs demonstrated his skill on the instrument, leading the audience in a rendition of “Will the Circle Be Unbroken.”

Skaggs is not afraid to use his platform to call for prayer, revival and repentance, though his tactics have changed through the years. Early on, music industry insiders weren’t sure how to take his outspokenness.

“I was like a kid with a butcher knife,” he said. “I was young, and I was not mature. And I was letting people know I was saved…. And that they needed to be saved too.”

For the last 20 years, having his own record label has allowed Skaggs to do things his way, including becoming involved in groups and events devoted to revival in America.

Skaggs likens modern-day America to the Babylon of Daniel’s day and says what’s needed is repentance and a return to the Bible.

“If preachers are preaching self-help, and five easy ways that your life can be better, and not preaching the unapologetic Word of God, I’m telling you…. A self-help book did not get me saved. The Word of God is what I heard that convicted my heart. And it still convicts me. It is the plumb line.”

Despite the nation’s challenges, Skaggs is hopeful for the future.

“God is a perfect God, and He has a plan for America. He hasn’t lost His vision for the church. Our greatest days are not behind us. The great cloud of witnesses are praying for us and cheering us on. Wake up, stand up, look up.”